Former Minneapolis police officer Derek Chauvin addresses his sentencing hearing and the judge as he awaits his sentence after being convicted of murder in the death of Floyd in Minneapolis, Minnesota, US June 25, 2021 in a still image from video. PHOTO: REUTERS
MINNEAPOLIS, US:

A judge sentenced former Minneapolis police officer Derek Chauvin to 22-1/2 years in prison on Friday for the murder of George Floyd during an arrest in May 2020, video of which galvanized a national protest movement against racism.

A jury found Chauvin, who is white, guilty on April 20 of unintentional second-degree murder, third-degree murder and second-degree manslaughter in the death of Floyd, a Black man. The verdict was widely seen as a landmark rebuke of the disproportionate use of police force against Black Americans.

Chauvin's sentence was one of the longest given a former police officer for using unlawful deadly force in the United States, Minnesota Attorney General Keith Ellison, whose office prosecuted the case, told reporters. Successful prosecutions of police officers in such cases have been rare.

"Today's sentencing is not justice but it is another moment of real accountability on the road to justice," Ellison said outside the courtroom, calling on law enforcement leaders around the United States to see it as a moment for reform. 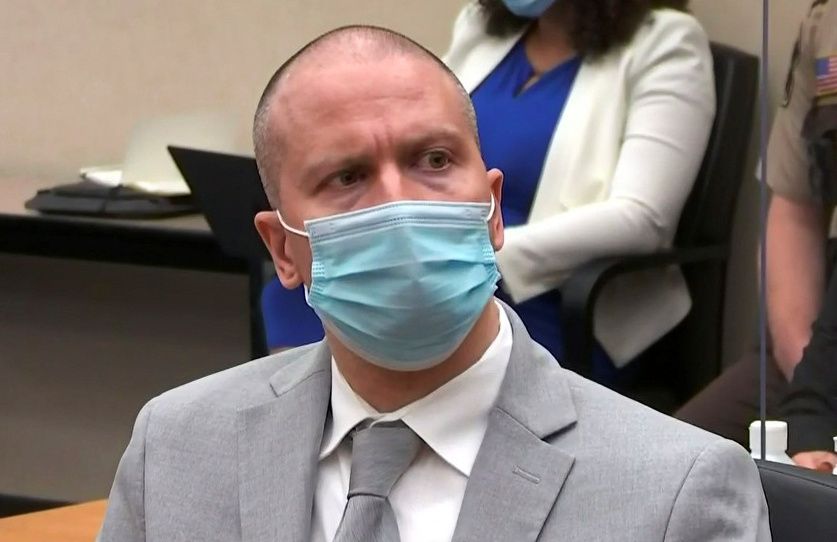 Former Minneapolis police officer Derek Chauvin listens to the judge announce his sentence of twenty two and a half years in prison for the murder of George Floyd during Chauvin's sentencing hearing in Minneapolis, Minnesota, US June 25, 2021 in a still image from video. PHOTO: REUTERS

At the White House, US President Joe Biden, who has spoken several times with the Floyd family, said the sentence seemed appropriate.

Both Floyd's brother Rodney and his nephew Brandon Williams criticized the sentence as a "slap on the wrist."

"We were served a life sentence," Williams said outside the courthouse. "We can't get George back."

Before the sentence was handed down, Floyd's brothers told the court of their anguish, Chauvin's mother insisted on her son's innocence, and Chauvin himself offered condolences to the Floyd family.

Hennepin County District Judge Peter Cahill said it was important to recognize the pain of the Floyd family.

He acknowledged the global notoriety of the case only to say it would not sway him.

"I'm not basing my sentence on public opinion," Cahill said. "I'm not basing it on the attempt to send any messages. The job of a trial court judge is to apply the law to specific facts and to deal with individual cases." 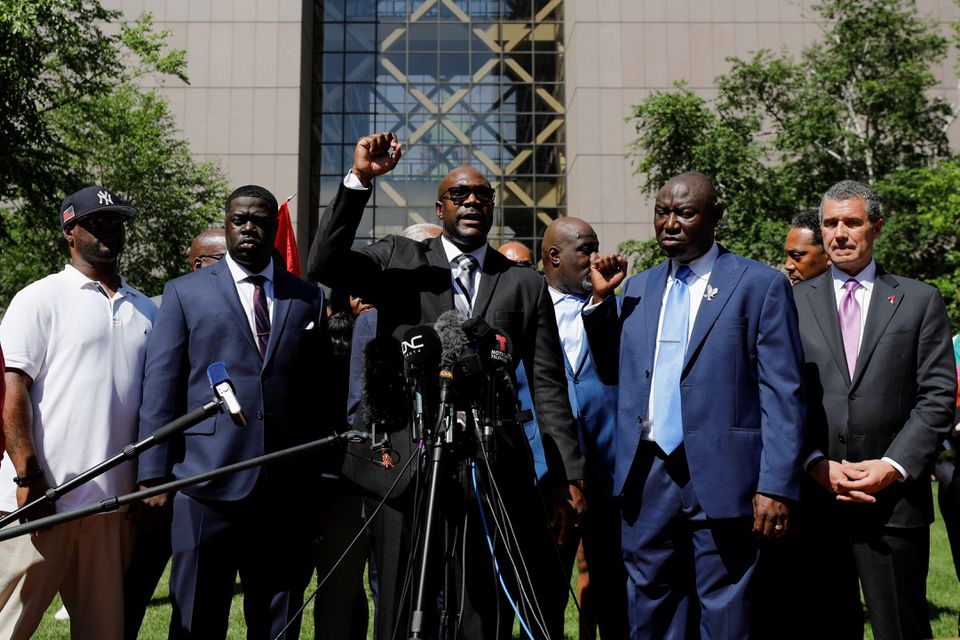 Philonise Floyd, surrounded by other members of George Floyd's family, gestures as he talks to the media after the sentence on former police officer Derek Chauvin, who was convicted for murdering George Floyd, in Minneapolis, Minnesota, US, June 25, 2021. PHOTO: REUTERS

In a 22-page sentencing memorandum, Cahill gave weight to prosecution arguments that Chauvin acted with cruelty and abused his position of authority, aggravating factors that allowed him to give a harsher sentence than would be indicated by state sentencing guidelines for first-time offenders.

Former Minneapolis police officer Derek Chauvin was sentenced to 22 years, six months on Friday for murdering George Floyd in May 2020 after a trial that was widely seen as a watershed moment in the history of U.S. policing. More photos: https://t.co/4GNDHFDs08 pic.twitter.com/Dr1vbm6yrr

The hearing began with prosecutors asking several members of Floyd's family to address the court. Floyd's 7-year-old daughter Gianna was first, appearing in a video recording.

"I ask about him all the time," she said in the video as Chauvin sat before the judge dressed in a gray suit and tie, a blue mask covering his nose and mouth. "My daddy always used to help me brush my teeth." Asked what she would say to him if she could see him again, she said: "It would be I miss you and I love you."

Prosecutors had asked for a 30-year prison sentence, double the upper limit indicated in sentencing guidelines.

The defense had asked for probation and had unsuccessfully sought a retrial ahead of an expected appeal.

Video of Chauvin kneeling on the neck of the handcuffed Floyd for more than nine minutes on May 25, 2020 caused outrage around the world and the largest protest movement seen in the United States in decades.

Chauvin was helping arrest Floyd on suspicion of using a fake $20 bill.

"What was going through your head as you had your knee on my brother's neck?" he asked. He told the judge he wanted the maximum sentence. "We don't want to see no more slaps on the wrist. We've been through that already."

Chauvin removed the mask he was wearing because of COVID-19 protocols to address the judge, saying he could not give a full statement due to "additional legal matters."

"But very briefly though, I do want to give my condolences to the Floyd family," he said. "There's going to be some other information in the future that would be of interest and I hope things will give you some peace of mind. Thank you." 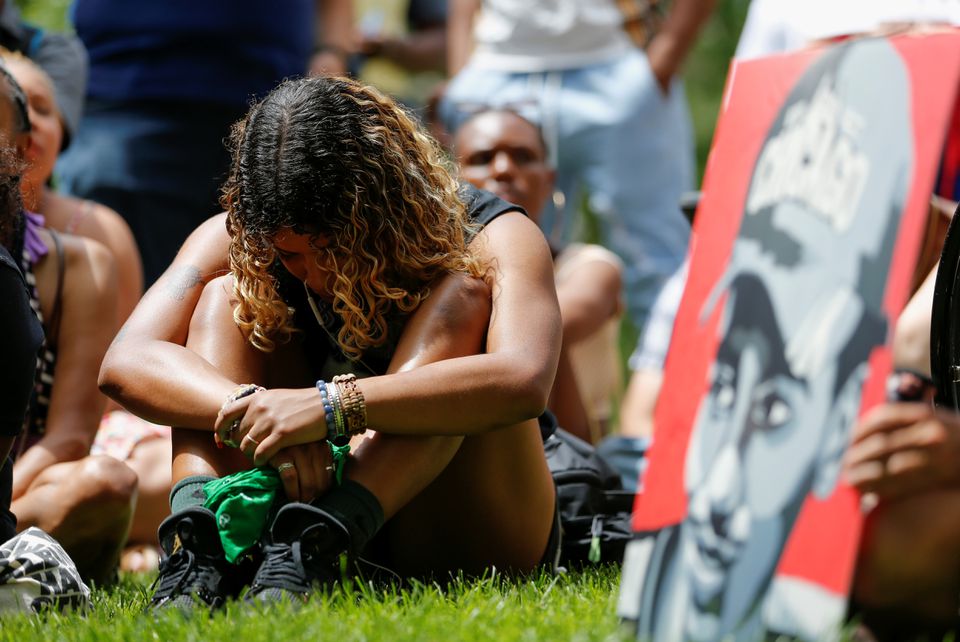 A woman reacts as people gather outside Hennepin County Government Center to hear the sentence pronounced on former police officer Derek Chauvin, who was convicted for murdering George Floyd, in Minneapolis, Minnesota, US, June 25, 2021. PHOTO: REUTERS

He did not elaborate.

Chauvin's mother, Carolyn Pawlenty, told the judge her son had been unfairly portrayed as racist and said she would always believe he was innocent.

"Derek has played over and over again in his head the events of that day," she said, her voice quavering at times. "I have seen the toll it has taken on him. I believe a lengthy sentence will not serve Derek well. When you sentence my son, you will also be sentencing me." Protesters march during a brief rally after the sentencing of Derek Chauvin, the former Minneapolis policeman found guilty of killing George Floyd, a Black man, in Minneapolis, Minnesota, US June 25, 2021. PHOTO: REUTERS

Chauvin has been held at Minnesota's maximum security prison in Oak Park Heights since his conviction. It was not immediately clear where he would spend his sentence.

He could leave prison after about 15 years. In Minnesota, convicted people with good behavior spend two-thirds of their sentence in prison and the final third on supervised release.

The three other police officers involved in Floyd's arrest were, like Chauvin, fired the day after. The three are due to face trial next year on charges of aiding and abetting Floyd's murder. Chauvin is also facing a federal prosecution on charges of violating the civil rights of Floyd and of a 14-year-old boy he arrested in 2017.