Mathira and Sonya Hussyn reconcile after a misunderstanding went viral

For someone who made it to the mainstream by hosting a show too ‘bold’ for its time, Mathira taking trolls and bullies head one shouldn’t come as a surprise. If anything, the actor is known to call spade and spade and share her stories rather publicly. Recently, she took to Instagram and called out actor Sonya Hussyn for bullying her a few years ago.

Recently, the Saraab star made amends with her long-distant father on Father’s Day and shared the video of her call to her father on Instagram. While actors such as Feroze Khan and others lauded Sonya for burying the hatchet, Mathira called her ‘fake’. The VJ recalled how Sonya had made derogatory remarks about her a few years ago.

"I had to do get it off my chest,” Mathira wrote on Instagram. “Many people don't like me in the industry. It's a bit tough. When someone wants to give me some work, the lobby people [in the industry] stand against me but that's nothing because I think Allah finds a way to support you. You don't actually need people.” 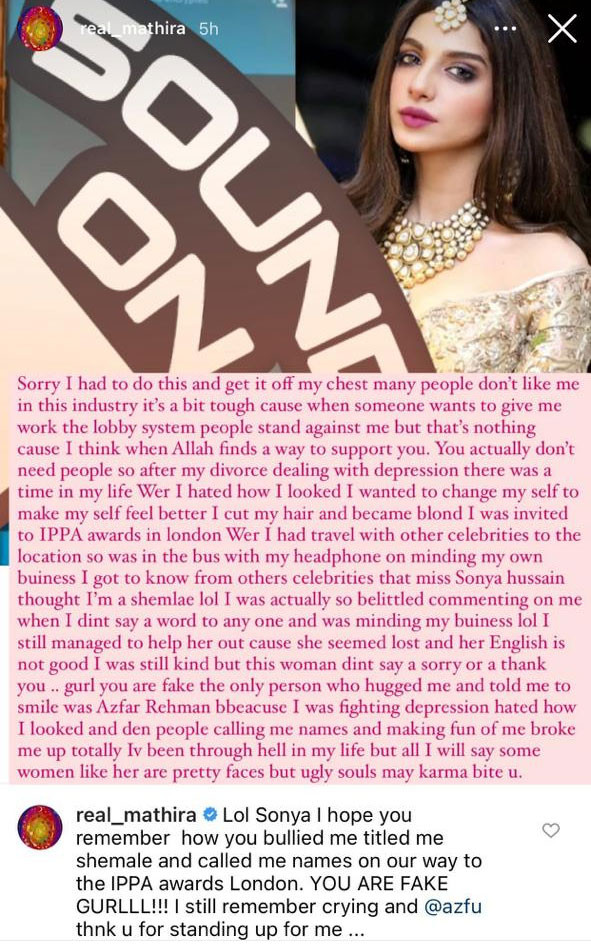 She further added that “After my divorce, there was a period where I was struggling with depression. I hated the way I looked so I cut my hair and dyed them blonde to feel better,” Mathira wrote on Instagram. During this period the TV personality was invited to attend the International Pakistan Prestige Awards (IPPA) in London along with other celebrities.

Mathira said that when she was on the bus when "other celebrities informed her about how fellow actor Sonya Hussyn thought she was a shemale." The actor added how she felt belittled even though she had been minding her business. "I still managed to help her out because she [Sonya] seemed lost and her English isn't very good. I was still kind but this woman didn't say sorry or thank you," she said adding, "Girl, you are fake. The only person who hugged me and told me to smile was Azfar Rehman."

She further commented, "I was fighting depression. I hated how I looked and people calling me names and making fun of me broke me completely. I have been through hell. All I want to say is girls like her are pretty faces with ugly souls."

In the next Instagram story, Mathira went on to thank the people who extended support. "I have been bullied before but I kept quiet because I had no confidence and didn't believe in myself," she said, adding, "The woman I was back then and the woman I am now - there's a huge difference. I am positive [towards life], out of depression, and know how to take a stand for myself." 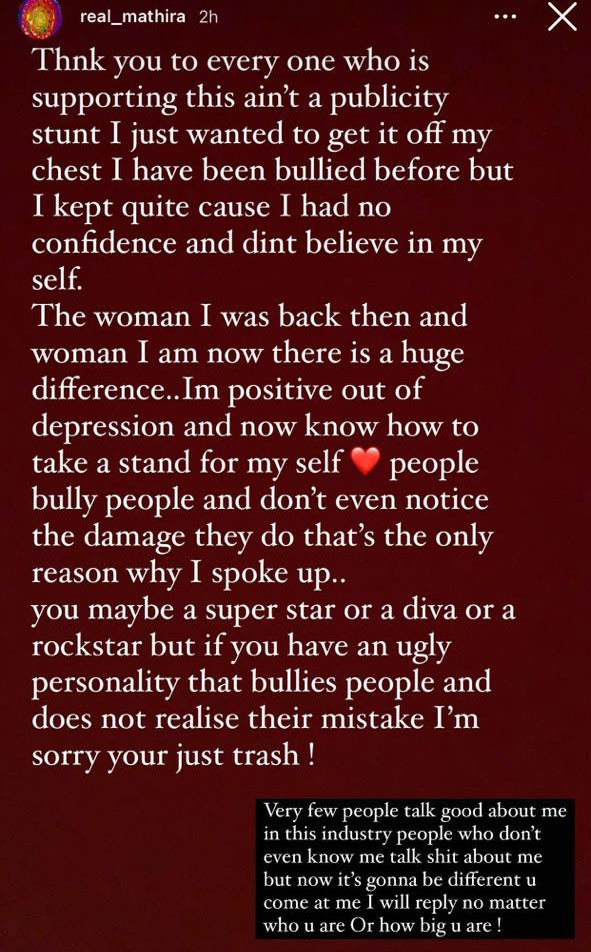 Mathira went on by saying, "People bully people and they don't even understand the damage they do. That's why I spoke up. Maybe you are a superstar or a diva or a rockstar, but if you have an ugly personality that bullies people and doesn't even realise their mistake, then you are just trash.

When reached out for a comment, Sonya denied all such claims and hearsay and she had herself called Mathira to clear any misunderstanding that might have occurred in the first place. "Just spoke to Mathira over the phone and glad that all misunderstandings have been cleared," she remarked. "Depression is real and very difficult to deal with. Hearing that Mathira had to deal with it alone was indeed heartbreaking. This goes without saying, if anyone ever needs to talk; I am just a call away."

The Ishq Zah-e-Naseeb star further shared, "Lack of communication only leads to housing angst and negativity. Talk it out. Don’t keep anything in your heart please, that’s the key to a healthy mind." Addressing Mathira, Sonya shared, "Mathira, you’re like a sister to me and I’ll always wish you the best."

"On a side note, my request to all…try not to pass judgments without contextualising and hearing the other side," the Meri Guriya actor concluded.

After Sonya clarified the matter, Mathira took to Instagram and lauded the actor for her call. "Yes, sisters forever. United we stand," Mathira penned, adding, "I was hurt hence I spoke up. It's off my chest, I feel better." 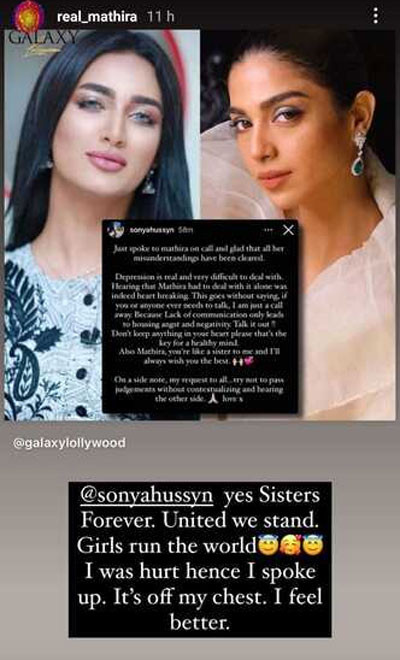 Mathira has time and again shared her ordeal with body shaming and image issues. Previously, many also accused her of getting surgeries while slut-shaming her once again. In response to this sudden outburst, Mathira took to her Instagram stories and had written, “I'm chubby and I'm happy like this. Who are you to shame me? Focus on yourself please.”

She went onto assert that she’d had enough of people judging her for her looks, and revealed she had only gained weight because of ‘hormonal imbalances’. "I'm so tired of people asking why I have [gotten] implants and all... Seriously, it's a shame. I have hormonal imbalance issues. Stop it."