Amid pandemic, number of people forced to flee homes has risen, says UN

According to Shehbaz, there is a dire need for evolving a national consensus on electoral reforms to ensure that the next general elections are held in a fair, free and transparent manner, without any interference “in view of the complaints of rigging in the 2018 general election”.

“[However,] the present government’s unilateral actions to force its electoral reforms agenda without any consultation with the stakeholders which conflicts with many constitutional provisions will make future elections controversial,” he stated.

The opposition leader said the Election Commission of Pakistan (ECP) has itself expressed serious concern regarding the recent elections bills “bulldozed through the National Assembly in an objectionable manner”.

“Any election related legislation must be based on broad-based consensus. For meaningful election reforms, institutions have to ensure stakeholders’ input and ownership. The spirit of upholding the Constitution must be at the center of the reforms plan.” 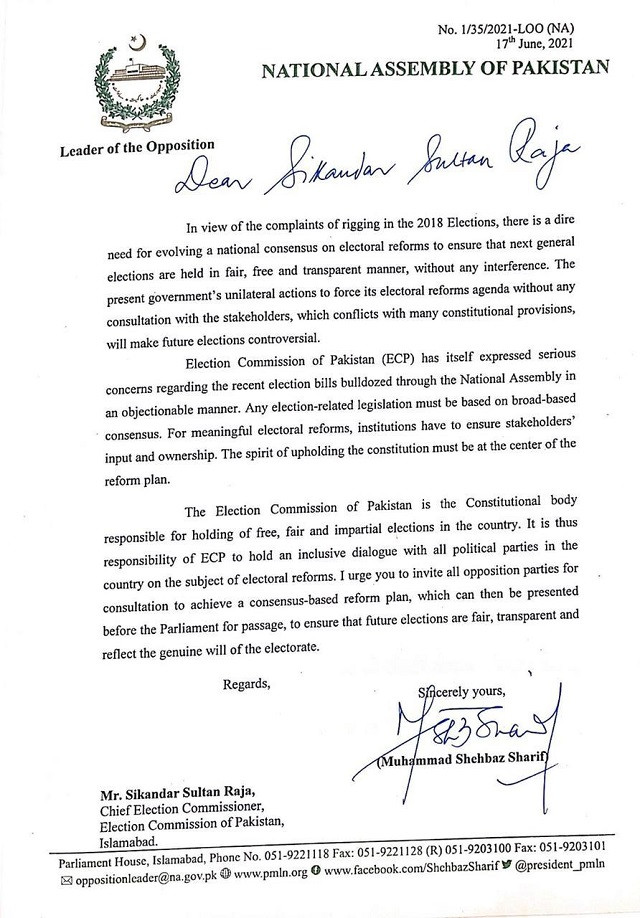 Shehbaz said the ECP is responsible both for holding free, fair and impartial elections in the country and to hold an inclusive dialogue with all political parties on the subject of electoral reforms.

“I urge you to invite all opposition parties for consultation to achieve a consensus-based reform plan, which can be presented before the parliament for passage, to ensure that future elections are fair, transparent and reflect the genuine will of the electorate,” he requested the CEC.

On June 10, the government succeeded in steering 21 bills through the National Assembly, despite the opposition boycotting the session. These included electoral reforms bills which paved the way for holding the Senate elections through open ballot.

These bills also enhanced number of seats reserved for female members of the religious minorities; allowed demarcation of constituencies on basis of registered votes rather than population; granted dual citizens the right to vote and allowed use of modern technology in elections.

Shehbaz Sharif on Friday also demanded that the media should be given full access to the parliament in a letter written to National Assembly Speaker Asad Qaiser.

The PML-N president noted that the parliament has resumed its activities after a decline in coronavirus cases and the media should be allowed to cover proceedings in the house.

He said the opposition leaders should be allowed to speak to the media. “The media is not being granted the opportunity to provide equal coverage to the government and the opposition.” 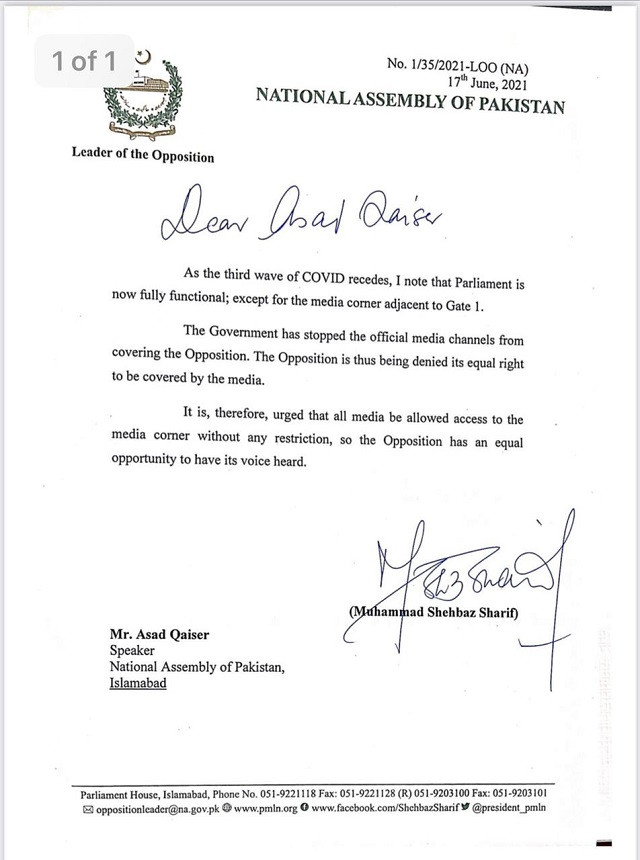 EVMs to cost Rs25b if polls held in single day

EVM to be developed in a month

FIA to send another notice to Imran, Umar in funding case

Xi, Putin to attend G20 summit in Bali this Nov