Hundreds of workers and human rights activists, who came from different parts of the United Kingdom, staged anti-India, pro-freedom of Indian Illegally Occupied Jammu and Kashmir (IIOJK) and Palestine protest in UK's Cornwall to condemn the rising killings of political activists, human rights violations and arrests of political leaders in the two disputed territories.

The protest march was jointly led by the Tehreek-e-Kashmir (TeK) UK. The protesters gathered at the main venue of the G7 conference.

TeK UK President Raja Fahim Kayani, while addressing the protesters, said that struggle of Kashmiris is a moral question that puts to shame those who claim to be harbingers of freedom, defenders of human rights, and providers of justice.

He said when G7 leadership is meeting in the UK, India has turned IIOJK into a concentration camp and has made life of Kashmiri people hell.

"Children are main victims at the hands of Indian army in IIOJK since 1989," Kayani said, adding, "Let us remind these conscience keepers that Kashmiris have been denied the right to self-determination promised by these same countries in 1948." 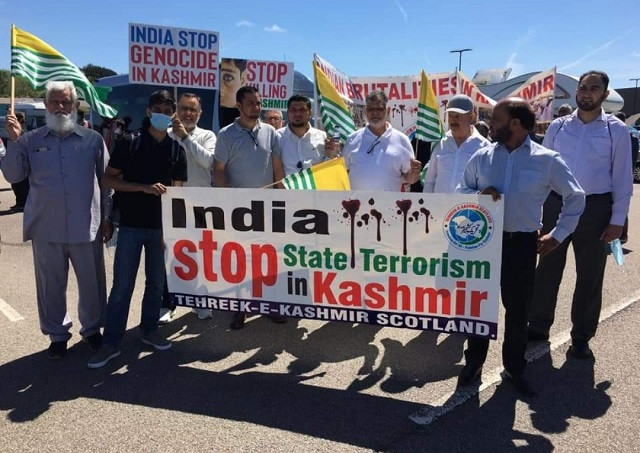 He said that Kashmir is the longest unresolved issue in the United Nations and the people of Kashmir are being punished by the Indian forces for asking for their political rights.

"Your business interests have made you blind. Come out of this hypocrisy and stand for justice, human rights and basic right to self-determination for the people of Kashmir," he added.

"Your silence has made you complicit in settler colonialism after India opened gates of extremist Hindu settlers by removing citizenship safeguards on August 5, 2019," the TeK president observed.

India, he went on to say, is openly violating the Geneva Conventions by removing natives and settling non-native and anti-Muslim settlers. "Kashmir is a Muslim majority region and India is changing the demography because India knows it will lose Kashmiris hands down when a plebiscite is held."

Kayani further said that IIOJK is the most militarised area in the world. "More than half a million people have killed in the last 73 years, 100,000 people have been killed in last 30 years. More than 13,000 women have been molested. New Delhi is committing environmental terrorism."

He said that the Indian occupation troops are plundering Kashmiris resources, cutting down forests, transporting timber to their military bases in India because of which glaciers are melting at a faster pace, causing flash floods in the valley.

He reminded world leaders that India is not only responsible for war crimes against humanity in IIOJK but also must be held accountable for environmental terrorism at a time when global leaders are holding climate summits to counter global climate change.

"The world must stop India’s demographic terrorism in IIOJK. It is time to stand up against India’s settler colonialism and hold it accountable for its war crimes and human rights abuses in Kashmir," Kayani concluded.

‘Kashmiris inclusion a must in dialogue’

SC to hear plea against Bakhtiar after vacation