Additional Attorney General Sohail Mahmood submitted a one-page statement in the Supreme Court of Pakistan wherein it stated, "as specific allegations about certain officers of the state were made in the petition and read out in court, on instructions it is placed before this court that the allegations made are baseless, misleading and therefore denied".

Siddiqui had earlier alleged that senior ISI officials had approached him at his residence to discuss the Panamagate case wherein former prime minister Nawaz Sharif was convicted.

A five-judge larger bench headed by Justice Umar Ata Bandial is hearing the former judge's plea against his removal. 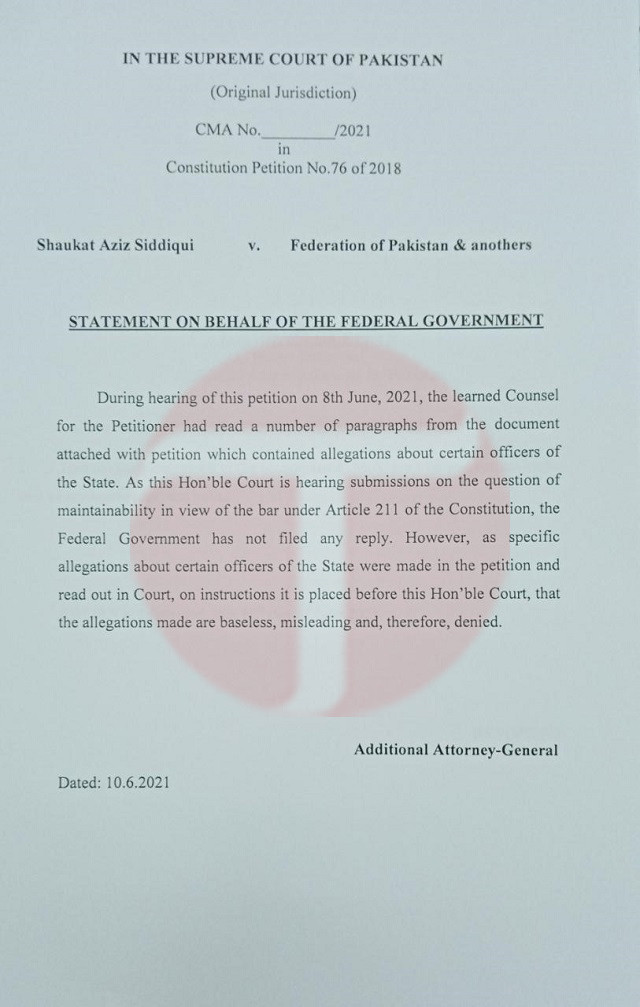 Earlier, Hamid Khan, the counsel for Siddiqui, read out the replies submitted with the Supreme Judicial Council (SJC). The replies said that the former judge had been removed from the IHC division bench-1 (DB-I) before October 2017.

"The timing makes it obvious that this was a calculated move to exclude me from [the] regular [division bench] DB-I since appeals regarding the politically sensitive Panama Papers case were to be heard during this time. This too after I was heading DB-I as Senior Puisne Judge prior to this time"

"On three occasions, I met the Hon’ble Chief Justice to know the reasons for such an inexplicable turn of events, but the reply I received was astonishing."

“On two occasions, the Hon’ble CJ mentioned the pendency of the references against me before the SJC as a cause of exclusion and once [on] an order from higher-ups."

"I replied that you people are not supposed to indulge in such type of activities as the same does not fall within the domain of the ISI, but he had other views."

“He sought permission to leave with the remarks that they would take care of [the] pending references against me and also indicated that Chief Justice IHC may resign due to health issues and in that eventuality, I may become CJ in the month of Sep, 2018 instead of Nov, 2018."

“Again, it was shocking for me to know about the claim of this official that he was in a position to influence the proceedings of the honorable SJC.

“On the second visit, dated 19.07.2018, Maj Gen Faiz Hameed told [me] that on passing of order dated 18.07.18 by me, he was summoned by General Qamar Javed Bajwa, Chief of Army Staff [COAS] and that his job is at stake because the COAS showed great annoyance and displeasure on his inability to handle a judge of high court.

“As per him, the COAS directed him to hold a meeting with me to know ‘what Judge sb wants? In [my] reply, I stated that I need nothing except that all organs of the state and the respective departments of the executive may remain within the limits prescribed by the Constitution and the law of the land."

“On this, he stated, Sir, it is better to forgive bitterness as you are considered as a very upright and loyal Pakistani even in the ranks of army except a few individuals, therefore, good working relations may be in the interest of Pakistan."

“I inquired from him that if this reputation of mine exists then why have they exercised their influence to ensure that DB-1 headed by me must dissolve the moment cases related to Panama start to land in IHC?"

“He very frankly conceded that some members of the team dealing with the cases were of the view that Justice Siddiqui is pro-defence and there is apprehension that he may grant relief to accused persons."

“When I asked how they manage constitution of a bench to hear appeal against conviction of Nawaz Sharif, he told me that Justice Anwar Khan Kasi, CJ IHC was approached at Quetta through a mutual friend, where he was asked to constitute a division bench not headed by Justice Shaukat Aziz Siddiqui.

“Justice Kasi in reply informed me that he will constitute a bench to which we are comfortable."

"He [Major Gen Hameed] further informed that they wanted assurance that [the] bail plea of accused Nawaz Sharif is not heard/taken up before the General Election dated 25.07.18."

Thereafter, he stated, "They wanted the matter to be brought before the DB headed by me for attaching some credence to the proceedings."

“From his demeanour, I could tell that this reply of mine did not please him and he left my residence along-with his companion. On both occasions, Major Hameed came on an official vehicle of the ICT administration."

“The statements made by DG ISI and the unfolding of events on the ground clearly substantiate the disclosure of facts by me to the Rawalpindi bar as a gospel truth,” the statement concluded.