As per notification, Justice Shaukat Siddiqui's case was de-listed due to non-availability of requisite bench

The Supreme Court of Pakistan de-listed once again the hearing of a case against former Islamabad High Court (IHC) judge Shaukat Aziz Siddiqui, on Monday.

According to the notification issued by the top court's registrar, the case was de-listed due to "non-availability of the requisite bench."

Siddiqui had moved the top court for an early hearing of his petition, against his removal by the Supreme Judicial Council (SJC) two years ago.

On October 11, 2018, President Arif Alvi removed Justice Siddiqui as IHC judge on the recommendation of the SJC.

Read When facts admitted, no need for inquiry: SC judges

On June 1, as the SC resumed hearing of the petition, one member of the bench, Justice Ijazul Ahsan, observed that when facts are admitted, there is no need for a proper inquiry.

“It’s happening in every department that when facts are admitted, there is no need for an inquiry,” Justice Ahsan remarked.

Justice Umar Ata Bandial, who was heading the five-judge larger bench, also endorsed Justice Ahsan’s view, saying that when facts were admitted, there was no need for cross examination.

Earlier, the Supreme Judicial Council had unanimously opined that while delivering a speech before the District Bar Association in Rawalpindi, Justice Siddiqui had displayed conduct unbecoming of a high court judge.

Siddiqui, who is retiring on June 30, had requested the apex court to fix his case on day-to-day hearing. The former judge in his application narrated how his case was being delayed.

Since 2018, no substantial proceedings took place except the issuance of notice after two-and-a-half years in January 2021.

“The matter got delayed for unknown reasons which is apparent on the face of the record as firstly frivolous office objections were raised against which a Miscellaneous Appeal bearing No. 140 of 2018 was filed which came up for hearing before a Larger Bench."

"The Hon’ble Larger Bench vide order dated 25.03.2019 allowed the said Miscellaneous Appeal and directed the office to number the titled Constitution Petition and set down the Petition before the Bench,” read the application.

It added that on September 24, 2020, the matter was once again adjourned by the bench with a direction to the office to fix the same after one month.

Again, the case was not fixed as directed by the bench. The petitioner wrote a letter to the chief justice of Pakistan (CJP) for the fixation of the titled case at the earliest.

Read more The ex-top judge who spared none

Taking notice of the said letter, the CJP fixed the case for December 9, 2020.

"On December 9, 2020, the bench, after proceeding with the matter very briefly in the connected petitions filed by the Bar Councils, directed the office to fix the cases in January 2021 after objection therein was met. The office fixed the case on last day of January 28, 2021.

“That on 28.04.2021 an application for an early hearing was filed by the petitioner and the case got fixed for 17.05.2021 but unfortunately it got de-listed to be fixed on 26.05.2021. Surprisingly again it got de-listed before a few hours of hearing without any reason stated,” the application further stated.

“That the petitioner since his removal from office has not been employed for gain. The petitioner like millions of other citizens has been guaranteed fundamental rights including but not limited to the rights to life, due process, dignity and access to justice.

“It is universally recognised principle that justice delayed is justice denied. The petitioner has suffered immense irreparable loss due to the inordinate delay,” the judge pleaded. 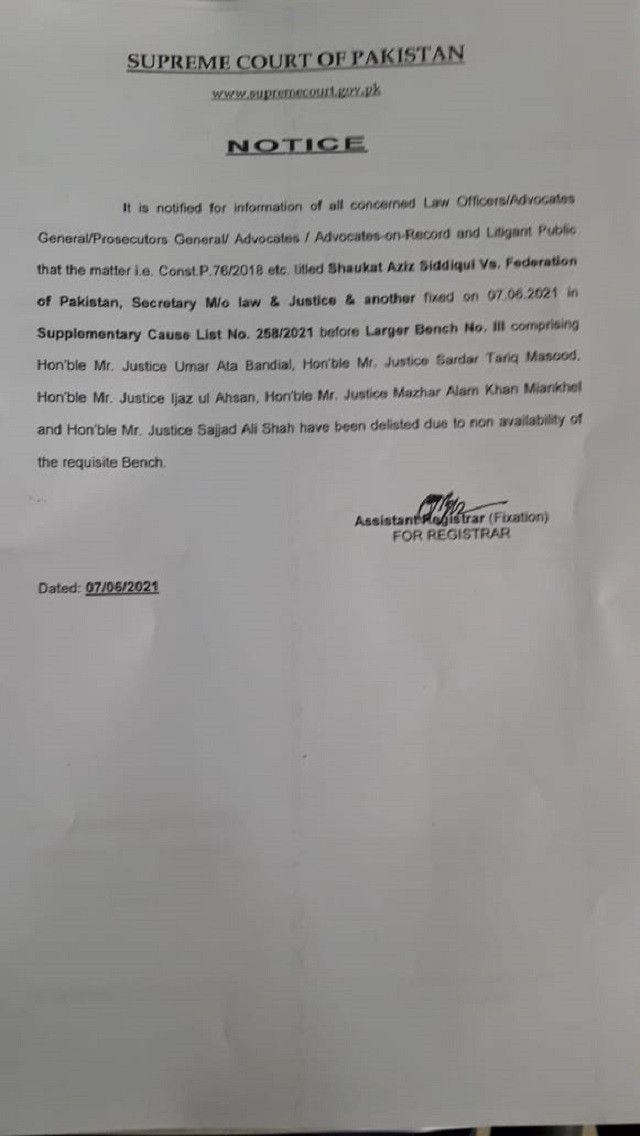 A copy of the notification available with The Express Tribune 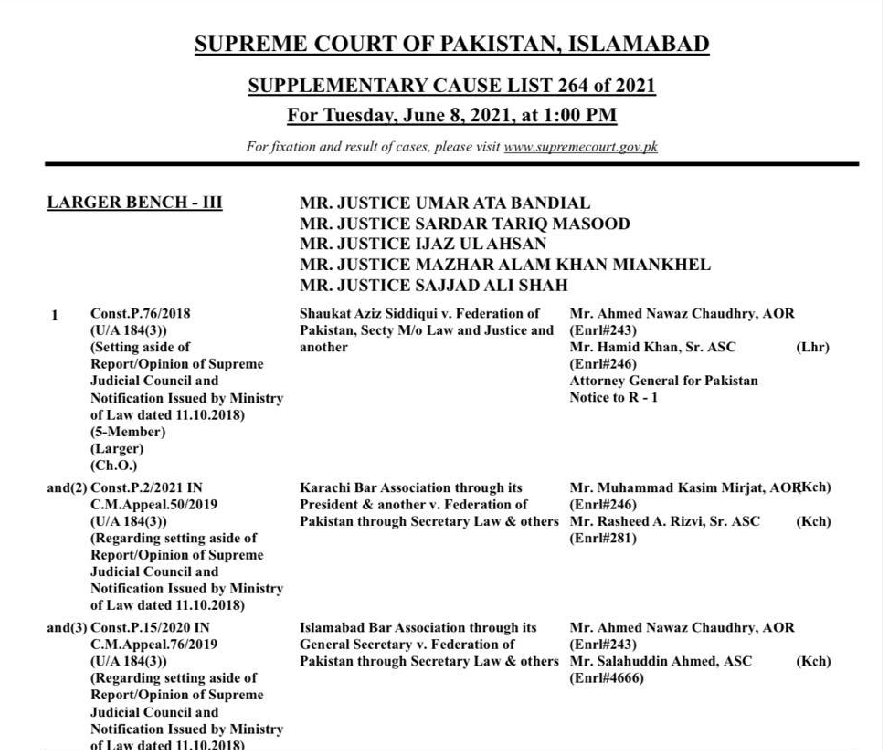