Do the prime minister and the NAB chairman have the same speech-writer or is it a mere coincidence because when Justice (retd) Javed Iqbal delivered a speech at the United Nations General Assembly (UNGA) on Friday, seven of his suggestion to the world’s highest forum were almost the same as Premier Imran Khan gave to another forum a few months ago.

The comparison of both the speeches shows that only three words are different in both the speeches when it comes to the part where both, the prime minister and the NAB chief, had suggested policy actions. Even the sequence and inverted commas remained unchanged.

On February 25, the prime minister while addressing the virtual launch event of the final report of the high-level panel on the International Financial Accountability, Transparency and Integrity for achieving the 2030 development agenda (FACTI Panel) gave seven suggestions.

The premier’s seven points included the immediate return of stolen assets; penalties on the financial institutions, lawyers and accountants, and other “enablers” of corruption, crime and tax evasion; disclosure of the “beneficial ownership” of companies; a global minimum corporate tax; fair digital taxation; review and revision of unequal investment treaties; and a coherent mechanism for monitoring illicit financial flows set up under the United Nations. 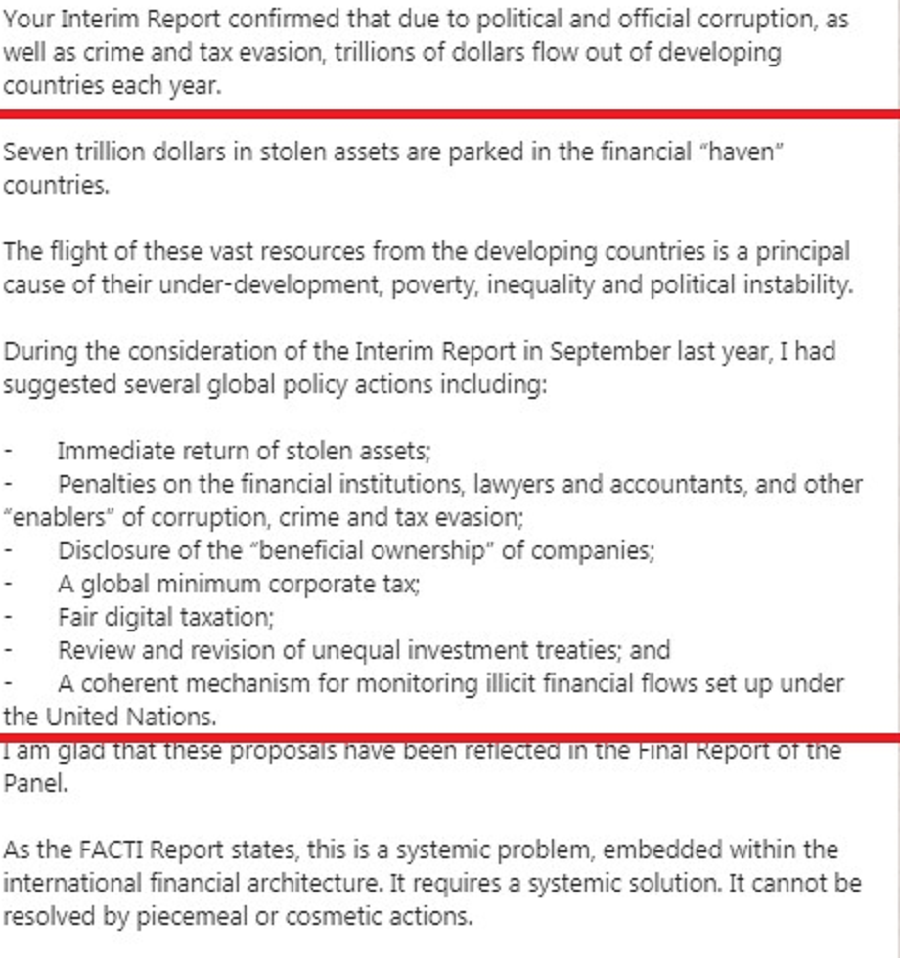 Surprisingly, the NAB chairman while addressing the UNGA’s special session against corruption on Friday has apparently copied the portion of the speech that the premier delivered in his speech in February.

In the context of the current global challenges, new commitments are urgently needed which are bold, clear and concrete, the NAB chairman said in his speech, adding that the member states need to actively explore innovative ideas and initiatives to strengthen the existing international framework to prevent corruption and to end impunity.

“This special session is an opportunity for all of us to explore and develop these ideas further, particularly on the following priority areas,” he said.

Subsequently, he reproduced the seven points in the same sequence: “Immediate return of stolen assets; Penalties on the financial institutions, lawyers and accountants, and other “enablers” of corruption, crime and tax evasion; Disclosure of the “beneficial ownership” of companies; A global minimum corporate tax; Fair digital taxation; Review and revision of unequal investment treaties; and A coherent, transparent and inclusive mechanism for monitoring illicit financial flows set up under the United Nations.”

The anti-graft body’s head only included the words “transparent and inclusive” in the last point. The rest of the text is unchanged.

Among other things, the chairman said that corruption continues to hold back development and deprive people of their rights in far too many places around the world.

Iqbal while quoting the recent report of the High-Level Panel on Financial Accountability, Transparency and Integrity said due to political and official corruption, as well as crime and tax evasion, trillions of dollars flow out of developing countries each year.

“Seven trillion dollars in stolen assets are parked in the financial “haven” countries and jurisdictions,” the NAB chief copied another sentence from the PM’s speech. Though he has added two words “and jurisdictions” but did not bother to change the inverted commas on the word “haven”.

“The flight of these vast resources from the developing countries is a principal cause of their under-development, poverty, inequality and political instability,” he plagiarised again as the same sentence is present in the premier’s speech. 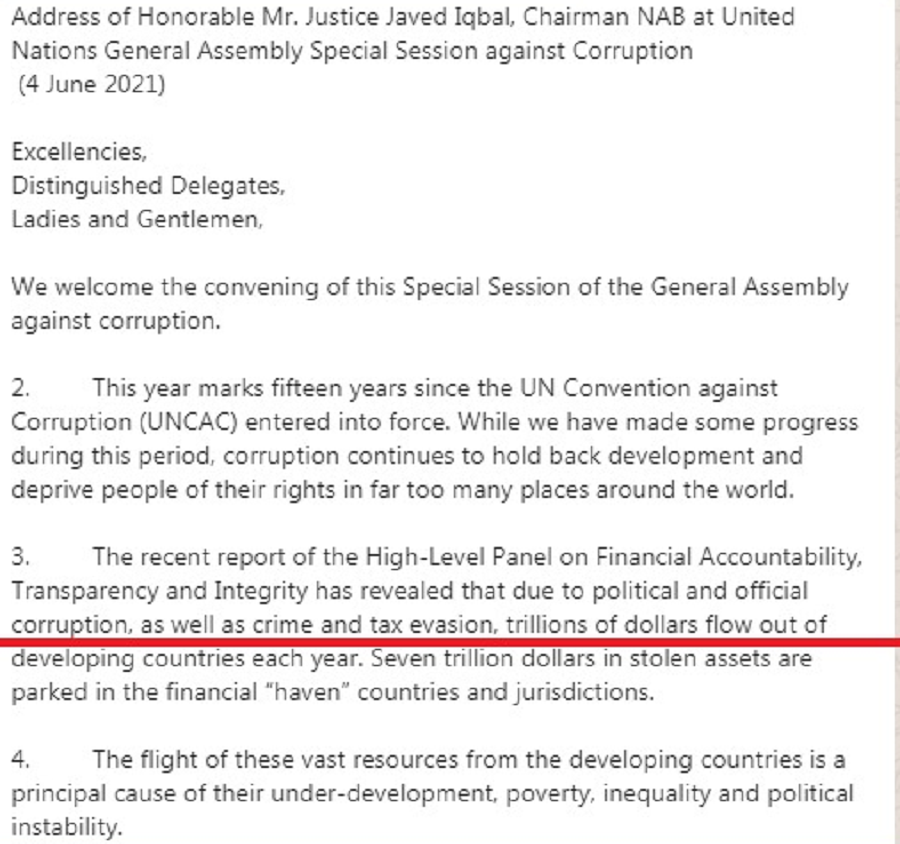 In his speech, Iqbal said that corruption is estimated to cost the world at least $2.6 trillion annually, approximately 5 per cent of the global gross domestic product (GDP). It is estimated that $1.26 trillion is lost by developing countries to corruption, bribery, theft and tax evasion each year, he said, adding, "This is approximately nine times Official Development Assistance funding."

In order to reinforce the global fight against corruption, he said, it is vital to strengthen international cooperation and efficiently prevent, detect, investigate and prosecute corruption, as well as to apply effective, proportionate and dissuasive penalties and recover criminal assets.

Though there may not be any nexus between the government and NAB, surprising as it may seem, NAB had earlier made its way into the PTI government’s two-year performance report pertaining to different ministries and divisions of the government.

In the table of contents, the second chapter is named “Accountability” and when one opens the chapter, the heading states “National Accountability Bureau” with a photo of the NAB chairman along with President Arif Alvi and Speaker National Assembly Asad Qaiser right underneath it.

Time and again, PM Imran and the government ministers have expressed that NAB is an independent and autonomous body established to keep a check on the government with powers to even arrest a sitting prime minister and works independently without any interference from the government.

However, NAB getting a place in the government’s performance report had raised many eyebrows and strengthened the notion that NAB is apparently the accountability arm of the government.