Pakistan has recorded a moderate current account deficit for the fifth consecutive month in April 2021, at $200 million, as the foreign currency outflow from the country stood high compared to the inflow due to acceleration in imports.

Cumulatively, in the first 10 months (July-April) of current fiscal year 2020-21, the current account balance remained in surplus at $773 million compared to a deficit of $4.65 billion in the same period of last fiscal year.

The surplus has helped stabilise the country’s foreign currency reserves at $15.77 billion and has aided in making international payments (balance of payments) for imports and repaying foreign debt. “The current account balance stands in surplus in the 10-month period mainly due to the outstanding growth in workers’ remittances from overseas Pakistanis and increase in export earnings with the rising import payments,” Pak-Kuwait Investment Company Head of Research Samiullah Tariq said while talking to The Express Tribune.

A modest export of technology and a notable reduction in import of services, like partial international travel, also contributed to maintaining the current account surplus, he said.

Imports have remained on an uptrend for the past few months amid reopening of the national economy after lockdowns.

Higher imports have supported broader economic growth as domestic consumption and export sector heavily rely on imports. “With the economy rebounding strongly in FY21, imports are picking up, but the rise is offset by an unprecedented growth in remittances and the recovery in exports,” the central bank said on its official Twitter handle after reporting the latest numbers for the current account balance.

“With current account balance contained and forex reserves at a four-year high, the economic revival is on a sound and sustainable footing.”

Imports have expanded in many sectors including food (wheat and sugar), cotton and machinery in the wake of low agricultural outputs in previous years and an expansion in the industrial sector of Pakistan.

The National Accounts Committee (NAC) on Friday revised up its projection for economic growth to a surprising level of 4% for the current fiscal year ending June 30 against forecasts of 1.5-3% growth by the SBP, International Monetary Fund (IMF) and World Bank.

Last month, the SBP revised up the current account surplus for nine months (July-March) to $995 million against $881 million in the first eight months (July-February) of FY21. 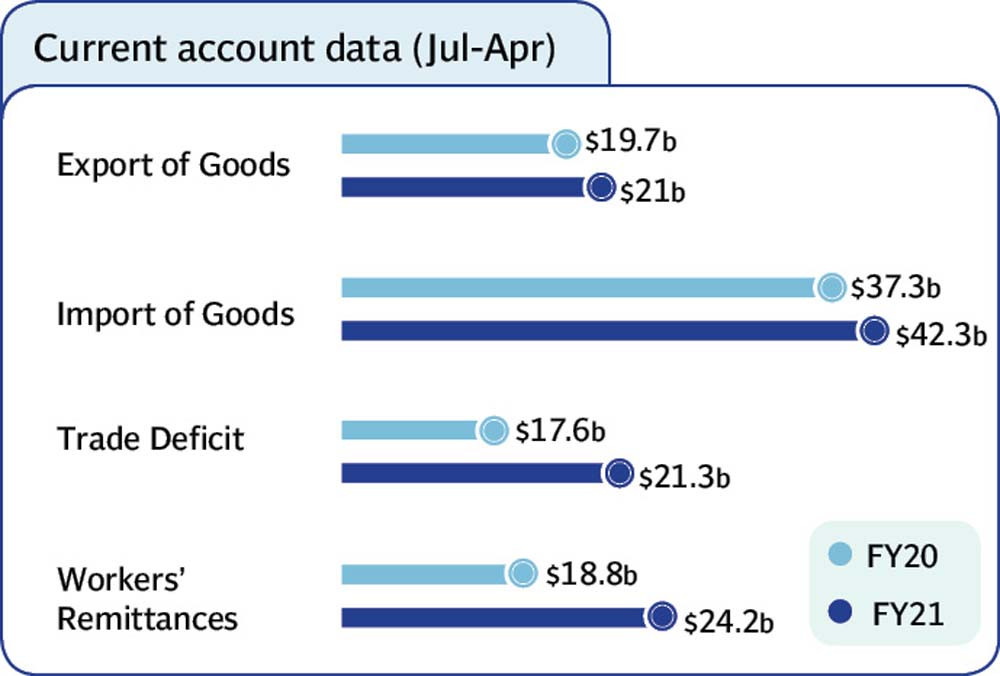 Overall, the current account balance improved by around $5.5 billion in the 10 months under review compared to a deficit of $4.65 billion in the same period of last year. Accordingly, the net balance shows a surplus of $773 million.

“The improvement in current account, of around $5.5 billion, is equal to the growth of $5.5 billion in remittance inflows,” Tariq said.

“Acceleration in imports for a growing economy is fine,” he said. “However, such imports may haunt the economy and pull the current account balance into (unsustainable) deficit in the long run (next year or so) if remittances and export earnings fail to maintain the growth momentum along with imports.”

Workers’ remittances grew by 29% (or $5.46 billion) to $24.25 billion in 10 months compared to $18.79 billion in the corresponding period of last year. Pakistan is well poised to record a current account surplus for full fiscal year 2020-21 after a decade. “It seems quite certain that Pakistan is likely to end up with a current account surplus this fiscal year of around $607 million,” AHL Research analyst Sana Tawfik said in a brief commentary last week.

Last time, the country saw the current account surplus for a full fiscal year in 2011.

“Despite expectation of more than 100% jump in trade deficit compared to the FY11 figure, the primary reason for this surplus is the unprecedented jump in remittance flows - defying the initial prediction of a decline due to the pandemic,” she said.

The current account balance would, however, return to deficit of 1.4% of GDP (or $4.4 billion) in FY22 with remittance inflows stabilising at the current level (of around $2.3 billion per month) and trade deficit widening due to import pressure in the economy, which is bound to enter the growth mode to create new job opportunities in the next fiscal year, she said.