In any case, such a decision would be contrary to the national security interests of Pakistan, the notice states

A member of the Senate on Tuesday submitted a call for attention notice and urged the government to discuss in the upper house recent media reports which claim that American forces will be provided air and ground access through Pakistan’s territory.

“This would be a grave and serious violation of the Parliament of Pakistan's unanimously adopted terms of engagement for American/foreign forces adopted on April 12, 2012,” read the notice by Senator Mushahid Hussain Sayed.

In any case, such a decision would be contrary to the national security interests of Pakistan as Pakistani people experienced the worst blowback from our previous entanglement after 9/11, and people of Pakistan would resolutely resist the encroachment of their sovereignty under any pretext, the notice further stated. 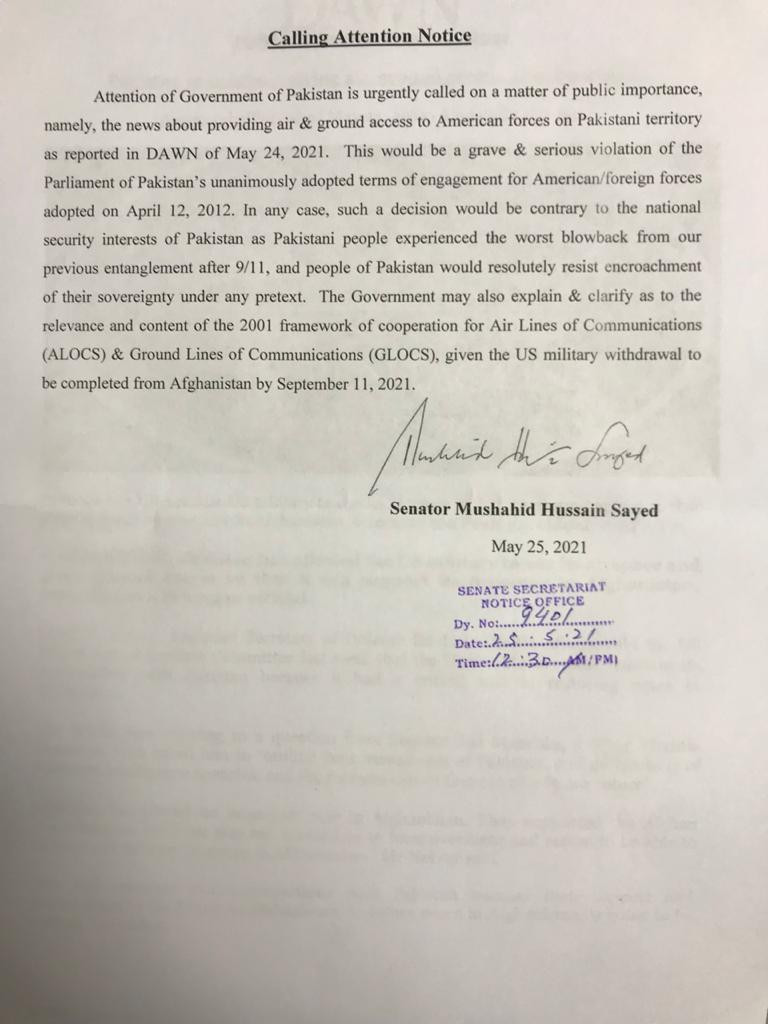 Read More: Opposition in NA asks govt to explain US claims of airspace use

A day earlier on May 24, the opposition in the National Assembly also demanded of the government to give explanation to the house about claims made by a senior Pentagon official that Pakistan had allowed the US military to use the country’s airspace to support its presence in Afghanistan.

The issue was raised by Ahsan Iqbal of the Pakistan Muslim League-Nawaz (PML-N) following statements of Acting Assistant Secretary of Defence for Indo-Pacific security affairs David F Helvey to the US House of Representatives Armed Services Committee last week.

State Minister for Parliamentary Affairs Ali Muhammad Khan responded to the opposition lawmaker’s statement, saying that Pakistan was playing a role for peace in Afghanistan and that Foreign Minister Shah Mahmood Qureshi would deliver the policy statement in the house.

US President Joe Biden announced on April 14 that all US troops would be out of Afghanistan by September 11, 2021, the 20th anniversary of the attack on the World Trade Centre in New York and the Pentagon in Washington.

Last week, Helvey and Marine Corps Brig-Gen Matthew G Trollinger briefed the US lawmakers committee on the situation in Afghanistan, the retrograde movement of US forces from Afghanistan and the future relationship with the government in Kabul.

While the US will not have troops based in Afghanistan, it would “maintain counterterrorism capabilities in the region sufficient to ensure that Afghanistan cannot again become a safe haven for terrorists who threaten our security,” Helvey told the committee.

“In coordination with our Afghan and international partners, we’re working to reposition our counterterrorism capabilities, including by retaining assets in the region to prevent the emergence of a terrorist threat against the United States homeland from Afghanistan,” he added.

Ahsan Iqbal referred to the media reports about the US claims and sought a clarification from the government. Parliamentary Affairs State Minister Ali Muhammad Khan replied that the foreign minister would give a policy statement on the matter.

Later, the Foreign Office issued a statement saying that there was no US military or airbase in Pakistan; nor was any such proposal envisaged. “Any speculation on this account was baseless and irresponsible and should be avoided,” Foreign Office Spokesperson Zahid Hafiz Chaudhri said.

India’s role in Afghanistan and its implications for peace efforts

'Small' Afghanistan attacks have no significant impact on troop pullout -US