Former Interior Minister Chaudhry Nisar confirmed on Sunday that he will take oath as member Punjab Assembly in its session scheduled for tomorrow (Monday).

According to Nisar, boycotting the by-election and leaving the political turf unoccupied [for rivals] will be a major political mistake.

According to the estranged Pakistan Muslim League-Nawaz (PML-N) leader, taking oath won't change his stance or viewpoint [regarding the political situation].

"I have taken the decision [of becoming an MPA] after consultation with the people," he maintained.

Shedding light on the move further, he said, "It is aimed at controlling the political situation and aspects in the constituency."

Nisar further stated that he will not take any sort of perks from the assembly after taking his oath.

He termed it illogical to participate in the by-poll swithout becoming a member of the provincial assembly.

Two days ago, on May 20, PTI MPA Chaudhry Adnan confirmed that Chaudhry Nisar planned to take oath of his PP-10 Rawalpindi seat.

Nisar, a former PML-N stalwart, contested the 2018 general elections as an independent candidate from two national and two provincial assemblies after developing differences with the Sharifs.

He maintained that being a member-elect of the provincial assembly it would not be justified for him to raise questions over the performance of the National Assembly.

Adnan was not the only person to make such a revelation. A few leaders from the PML-N, who requested anonymity, also confirmed that Nisar planned to take oath.

The PML-N officially distanced itself from the development with its spokesperson Marriyum Aurangzeb saying that it was not in their knowledge whether Nisar would take oath or not. It is not the first time that media had been abuzz with such news.

In April 2019, there were reports of Nisar taking oath of his PP-10 seat, however, that turned out to be untrue.

The rift between the Sharifs and Nisar widened when the latter in 2018 said he would not beg the PML-N’s parliamentary committee for an election ticket.

He also criticised the PML-N for having become a “family party”, which he said made it impossible for him to stay in it even though he had never really wanted to quit it. Nisar had a 35-year long association with the party. 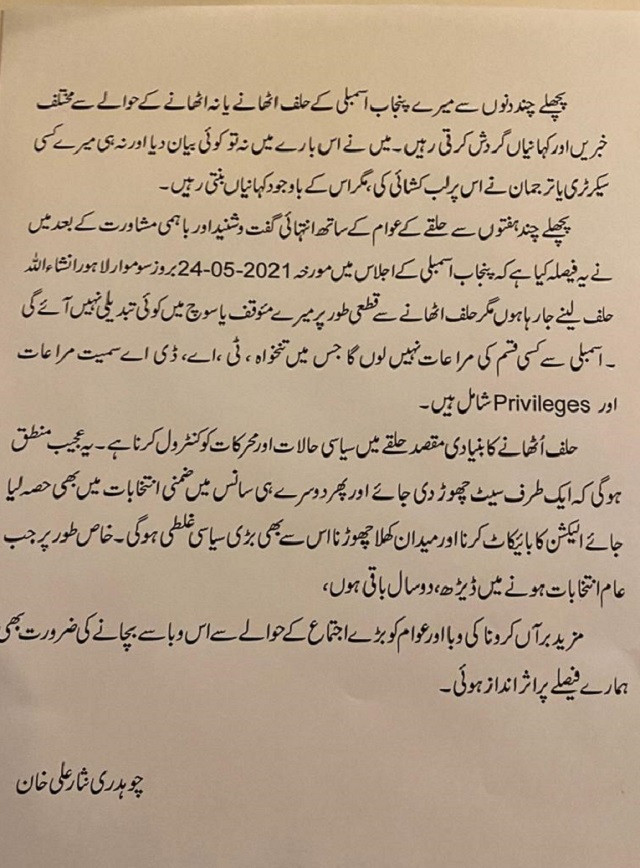 A copy of the statement available with The Express Tribune

PML-N moves LHC over Shehbaz being barred from flying abroad