No Feroze Khan, Hitler will never be right

The call for Palestinian freedom in the face of rising settler colonialism on the part of the Israeli state has always found massive support in Pakistan. A constant stream of news snippets and on-the-ground footage of violence against Palestinians from the West Bank has flooded social media in recent days, despite the suspicious cleansing of discover pages and the low reach, if not outright banning, of posts related to the Palestinian struggle for an end to the Israeli occupation.

However, in the influx of tweets and shares in support of the Palestinian resistance, a sinister undercurrent of anti-jewish sentiment has taken hold, endorsed by certain Pakistani celebrities. A recent post by actor Feroze Khan shared to his Instagram stories, which has since been taken down, echoed the growing antisemitism, blatantly supporting the massacre of Jews in Nazi Germany under Adolf Hitler, going as far as calling Nazis the “last warriors”. 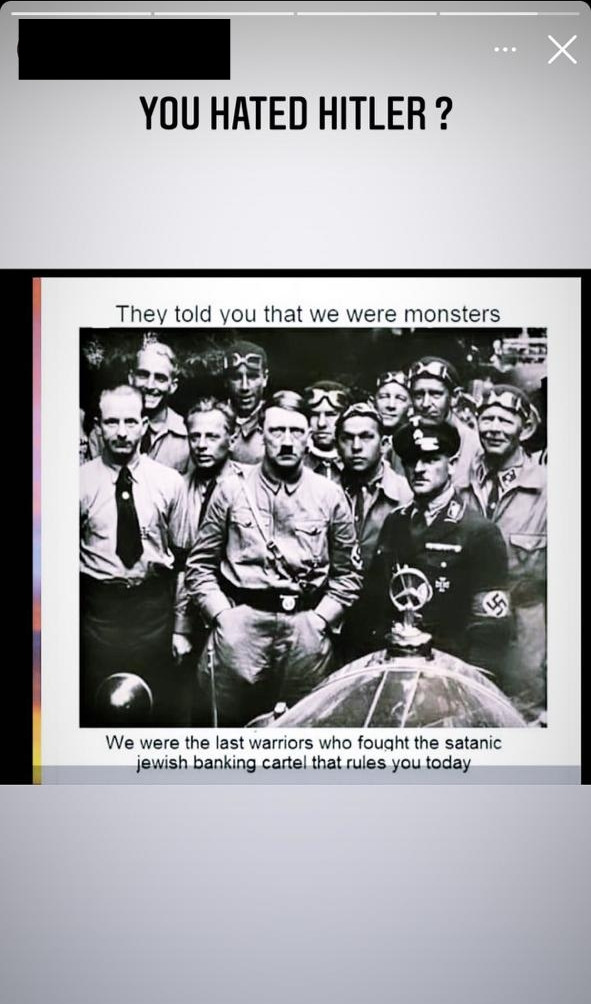 Actor Feroze Khan, in a now-deleted post, shared a picture in support of the Holocaust

Feroze Khan is not alone in his skewed beliefs, and this calls for an urgent need to assess opinions and introspect on what the fight is truly for. While posting in support of genocidal maniacs like Hitler cannot be defended, the conflation of the terms ‘Zionist' and ‘Jewish', used interchangeably by many, must be addressed. A distinction needs to be drawn between rallying in support of the anti-Zionist Palestinian cause, and the antisemitic act of supporting the systematic and racially motivated murder of the Jewish people.

Zionism is a political ideology. It is a nationalist movement that, while religiously motivated, is separate from the Jewish faith. A colonial enterprise at its heart, it supports the establishment of a national state for the Jewish people. With ethnic cleansing as a core principle, it has resulted in a slow takeover of Palestinian territory bit by bit, displacing the Arabs in the region and adding to the land of the apartheid state of Israel.

For comparison, one can look at the European settler colonization in America, leading to the displacement and genocide of the Native American population. While European colonization was firmly rooted in Christianity, it did not represent the views of all Christians and was indeed separate from Christianity as a religion.

Faith and politics often intertwine, but their distinctions must be maintained. Not all Jews support Zionism, not all Muslims identify with the Islamic State, and not all Christians believe in the ‘civilizing mission' of the European colonizers.

When it comes to Pakistanis supporting the Holocaust, the irony is crystal clear. Nazism is a thoroughly racist ideology. It is premised on the idea of a blue-eyed, light-skinned, and blond-haired ‘master race'. Nazi Germany targeted a host of people other than Jews as well, including black individuals and those with mental and physical disabilities.

The brown-skinned Muslim support of the genocide in Nazi Germany is the result of gross misinformation, and to advocate for such a violent enterprise is wholly despicable, regardless of the prejudiced justification provided.

The focus on Jew-hating distracts from the political motivators at play, ultimately disadvantaging the Palestinian fight for freedom, which is labelled by Israel as anti-Semitic. Which it is not. It is a short step but a steep fall from the anti-Zionist Palestinian struggle to the racist and antisemitic support of violence against Jewish people. Conflation will hurt the struggle for freedom, and it is a disservice to the people of Palestine.

Celebrities hold a unique power in modern society, with their actions being idealized more often than not due to their cult-like following. When it comes to misinformation, celebrities wield the power to spread it like wildfire. Large followings on social media and lax fact-checking mean celebrities have often done more harm than good. Whether it is the inflammatory anti-Muslim comments of Indian actor Kangana Ranaut or the pro-Nazi content casually posted on the internet by members of our own television and film fraternity, the reach is obvious and the damage difficult to repair.

With the power to command large followings, a grave social responsibility emerges to seek and share the truth, and for the celebrities that choose to bypass the research process, their ‘activism' is not needed, and indeed, actively discouraged.

Sharing content on social media is as simple as a click, seeking out the correct information may not come as easily. Leave the fight for those who care enough to make the effort.

Vaccinated Brits could be back on Europe's beaches soon

Hedge fund that bet against GameStop is closing down

Opposition knows PM Imran will stay in power for another term: Fawad