Nawaz Sharif’s Sheikhupura properties to be auctioned on May 20

An official notification confirmed on Tuesday the appointment of Dr Moeed as NSA. Interestingly, the Tehreek-e-Insaf (PTI) government abolished the post of NSA in 2019 as Foreign Minister Shah Mahmood Qureshi had then opposed the appointment of NSA, fearing challenge to his mandate.

After coming into power, Prime Minister Imran wanted to appoint General (retd) Ehsan-ul-Haq, the former Chairman Joint Chiefs of Staff Committee, the DG ISI and MI, as the new NSA. However, his appointment could not go ahead after concerned quarters suggested that there was no need for the post.

The coveted slot was subsequently abolished by the government in 2019. However, the revival of the NSA post is thought to be linked with ongoing efforts seeking a rapprochement with India.

Pakistan and India have been talking to each other through “back channels” that resulted in the lowering of rhetoric as well as revival of the 2003 ceasefire agreement along the Line of Control (LoC).

However, those contacts were established at the level of intelligence agencies, unlike the past when the two countries had used the office of national security advisers for this purpose.

Also, it is possible that the government appointed the fulltime NSA to ensure that he can engage with his Indian counterpart.

Meanwhile, as per the cabinet division notification, the status of NSA will be equivalent to a federal minister.

On December 24, 2019, Yusuf was appointed as Special Assistant to the Prime Minister (SAPM) on National Security Division and Strategic Policy Planning and was given the status of Minister of State.

Yusuf is the associate vice president at the Asia Center at the United States Institute of Peace (USIP). He is the author of Brokering Peace in Nuclear Environments: US Crisis Management in South Asia.

In October 2019, he was made chairman of Strategic Policy Planning Cell (SPPC) under the National Security Division (NSD).

The cell was formed to assist the government through research and draft policy recommendations on national issues.

Yusuf has done Masters in International Relations and PhD in Political Science from Boston University.

He was a research fellow at the Frederick S Padree Centre for the study of the longer range future at the Padree School of Global Studies at Boston University’s Political Science Department before joining USIP in 2010. 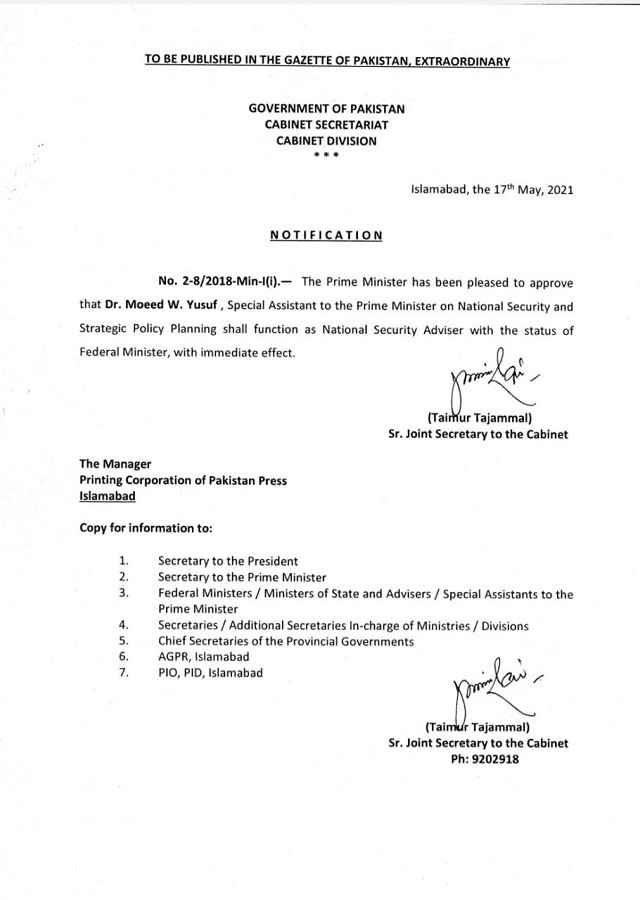 Huawei listed once more as a threat to US national security