Smoke rises from a building after it was destroyed by Israeli air strikes amid a flare-up of Israeli-Palestinian violence, in Gaza May 11, 2021. PHOTOS: REUTERS/AFP
JERUSALEM:

Israel's Benjamin Netanyahu vowed Tuesday to intensify attacks in Gaza as the foes traded heavy fire that killed at least 28 people, in an escalation of tensions sparked by unrest in Jerusalem.

World powers urged calm and Muslim countries voiced outrage amid the worst flare-up of violence in years that saw Hamas rain down rockets on Israel, while the Jewish state launched attacks with fighter jets and attack helicopters.

On the Palestinian side, nine children were among at least 26 people killed in the blockaded Gaza Strip, and 125 people there were reported wounded, many rescued from the smouldering ruins of buildings hit in the crowded enclave.

On the Israeli side, rockets killed two women in Ashkelon, just north of Gaza -- a coastal city which Hamas threatened to turn into a "hell", at one stage claiming to have fired more than 100 rockets in under five minutes to overwhelm air defences.

Netanyahu warned that the Israel Defense Forces would now intensify their attacks, which the army said have targeted military sites and claimed the lives of at least 17 Hamas and Jihad commanders. 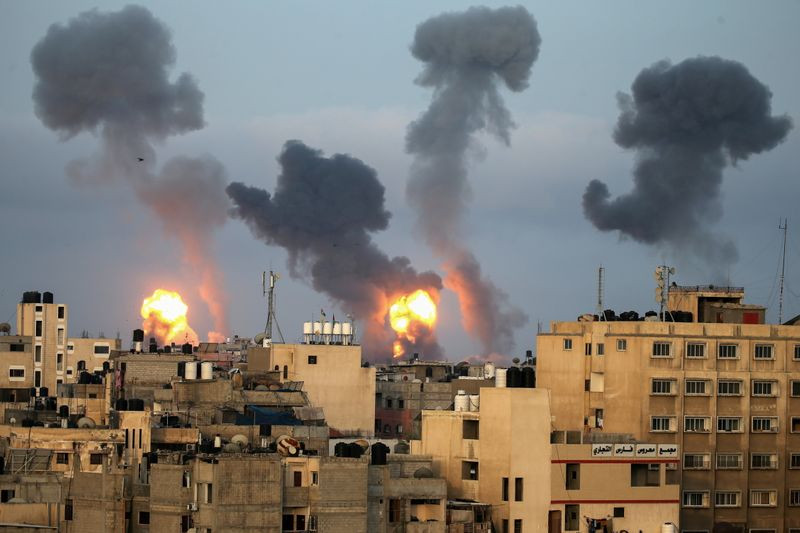 "Since yesterday, the army has carried out hundreds of attacks against Hamas and Islamic Jihad in Gaza ... and we will further intensify the power of our attacks," Netanyahu said.

Hamas, which rules the Gaza Strip, "will be hit in ways that it does not expect," the prime minister warned.

"We have eliminated commanders, hit many important targets and we have decided to attack harder and increase the pace of attacks." 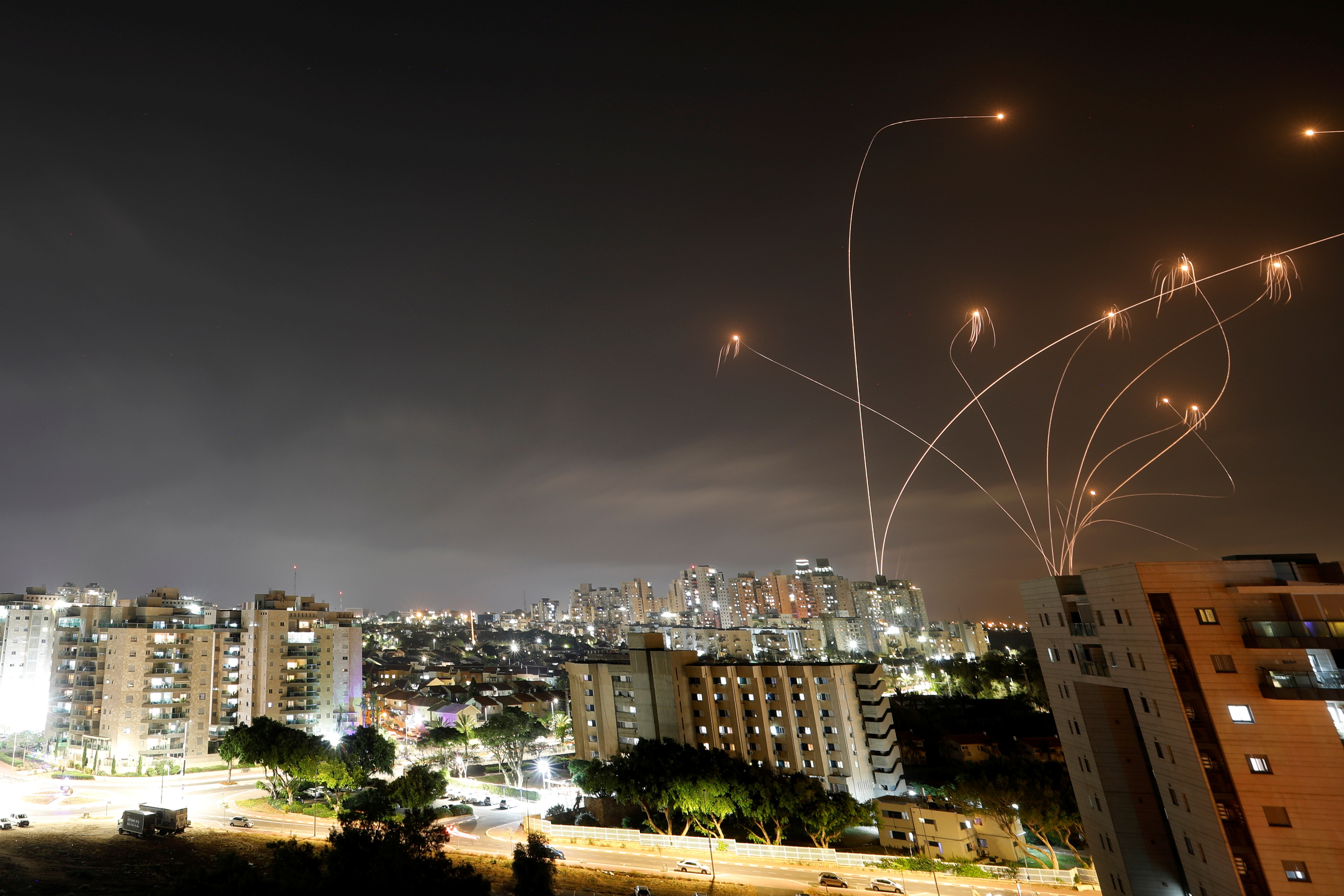 Tensions that have simmered for weeks flared last Friday when Israeli riot police clashed with large crowds of Palestinians at Jerusalem's Al-Aqsa mosque, on the last Friday of the Muslim holy fasting month of Ramadan.

Nightly clashes since then at the compound, which is holy to both Muslims and Jews, and elsewhere in east Jerusalem have left at least 700 Palestinians injured.

Hamas had Monday warned Israel to withdraw all its forces from the mosque compound and the Jerusalem district of Sheikh Jarrah, where looming evictions of Palestinian families have fuelled angry protests. 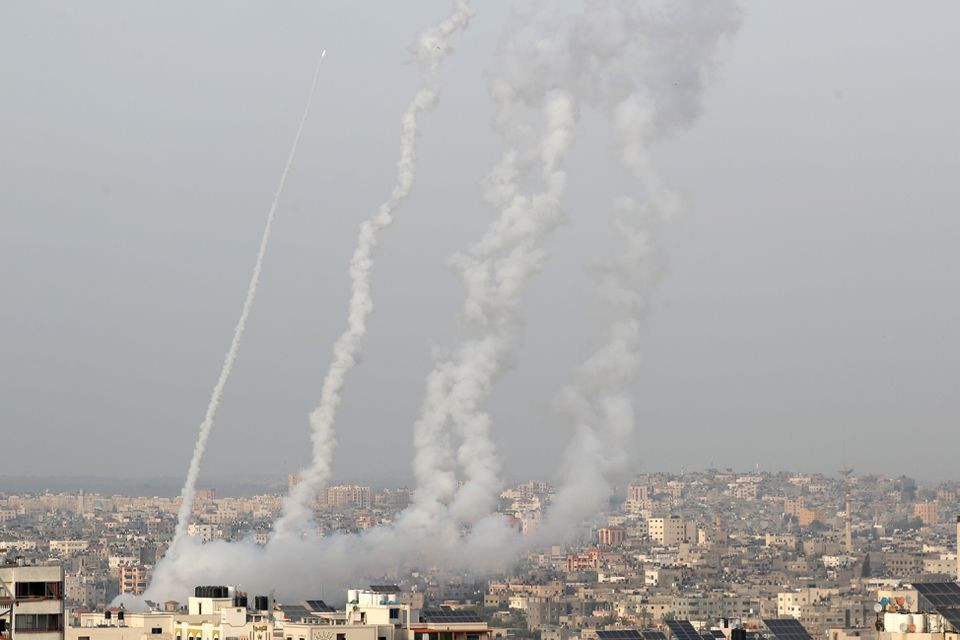 Sirens wailed across Jerusalem just after the Monday 1500 GMT deadline set by Hamas as people in the city, including lawmakers in the Knesset legislature, fled to bunkers for the first time since the 2014 Gaza conflict.

Hamas' Qassam Brigades said "this is a message that the enemy must understand well: if you respond we will respond, and if you escalate we will escalate".

The international community has voiced growing alarm, although the UN Security Council at a meeting failed to pass a resolution.

The Office of the UN High Commissioner for Human Rights condemned "the use of indiscriminate weapons, such as the rockets being fired into Israel" but also warned that "Israel must respect international humanitarian law" and take precautions to avoid civilian deaths.

Diplomatic sources told AFP that Egypt and Qatar, who have mediated past Israeli-Hamas conflicts, were attempting to calm tensions.

However, Egypt's Foreign Minister Sameh Shoukry told an Arab League meeting that, although Cairo had "extensively reached out" to Israel and other concerned countries to prevent further a deterioration, "we did not get the necessary response". 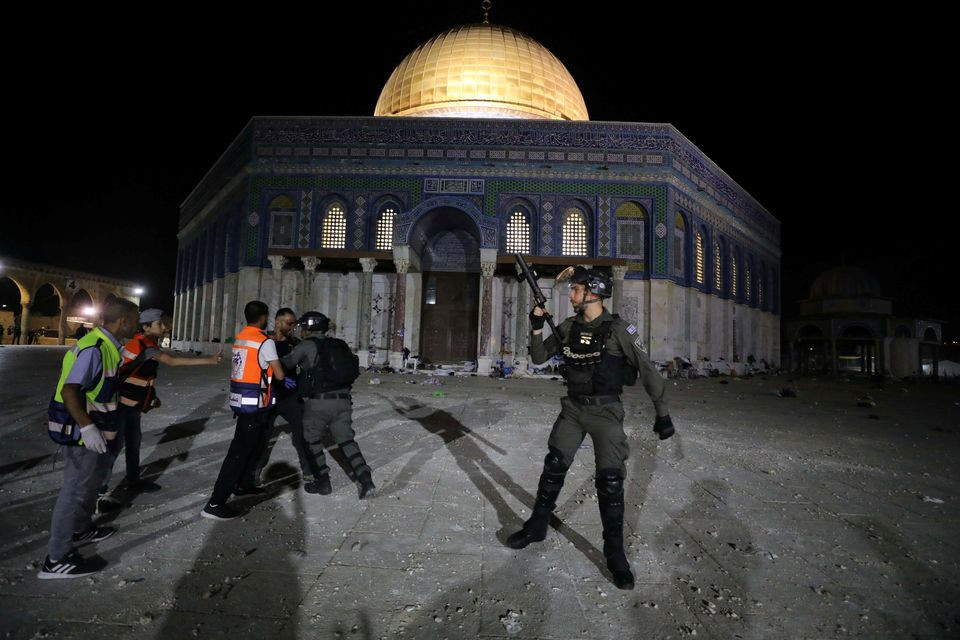 Large protests were held in solidarity with Palestinians in Muslim-majority countries including Jordan, Kuwait, Oman, Pakistan, Tunisia and Turkey.

In Amman, outside the Israeli embassy, protesters held up banners that read "Thank you Gaza", burnt Israeli flags and chanted "Shame, Shame the embassy is still there", "Zionists, we dig your graves" and "Death to Israel".

Jerusalem braced for more of the unrest that has seen Palestinians hurl rocks, bottles and fireworks at Israeli officers in riot gear, who have fired rubber bullets, stun grenades and tear gas.

"They shot everyone, young and old people," claimed Palestinian man Siraj, 24, about Israeli security forces in a confrontation in which he suffered a spleen injury from a rubber bullet.

Israeli police told AFP: "We will not allow disturbance of order while harming the fabric of life, inciting to harm police forces and violence against police officers and civilians."

Police commissioner Kobi Shabtai told Israeli TV on Monday that in Jerusalem in recent days "we showed too much restraint. We are at the stage of taking off the gloves."

A 13-storey residential block in the Gaza Strip collapsed on Tuesday night after being hit by an Israeli air strike, witnesses said.

Video footage showed three plumes of thick, black smoke rising from the tower, its upper storeys still intact as they fell. The tower houses an office used by the political leadership of Gaza's Islamist rulers, Hamas.

Electricity in the area around the building went out, and residents were using flashlights.

Shortly after the attack, Hamas and the Islamic Jihad group said they would respond by firing rockets at Tel Aviv. 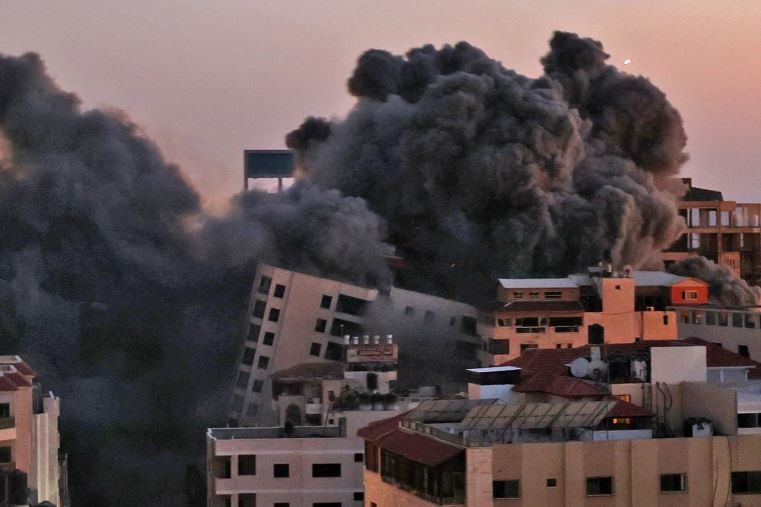 Air raid sirens and explosions were heard around the city and Channel 12 television said there had been a direct rocket hit on a building in the suburb of Holon. 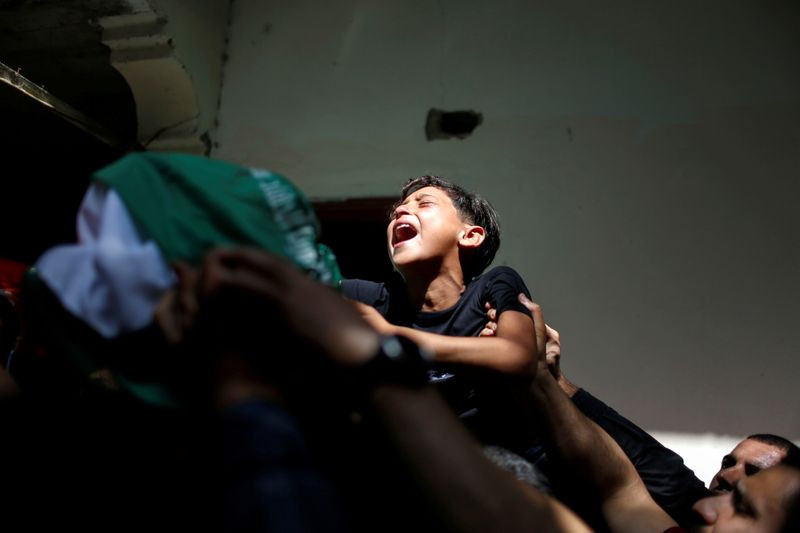 "We are now carrying out our promise," Hamas's armed wing said in a statement. "The Qassam Brigades are launching their biggest rocket strike against Tel Aviv and its suburbs, with 130 rockets, in response to the enemy’s targeting of residential towers."

Hours earlier, Israel had sent 80 jets to bomb Gaza and massed tanks on the border as rocket barrages hit Israeli towns for a second day, deepening a conflict in which at least 28 people in the Palestinian enclave and two in Israel have been killed. 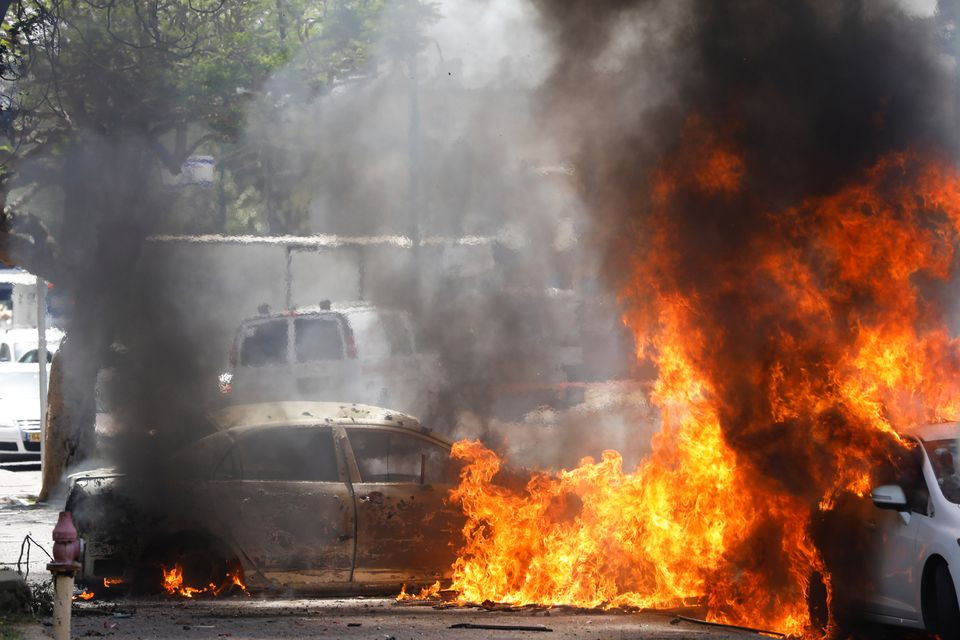 Residents of the block and people living nearby had been warned to evacuate the area around an hour before the air strike, according to witnesses. It was not immediately clear if the building had been fully evacuated, or if there were casualties.

The most serious outbreak of fighting since 2019 between Israel and armed factions in Gaza was triggered by clashes between Palestinians and Israeli police at Jerusalem's al-Aqsa Mosque on Monday. 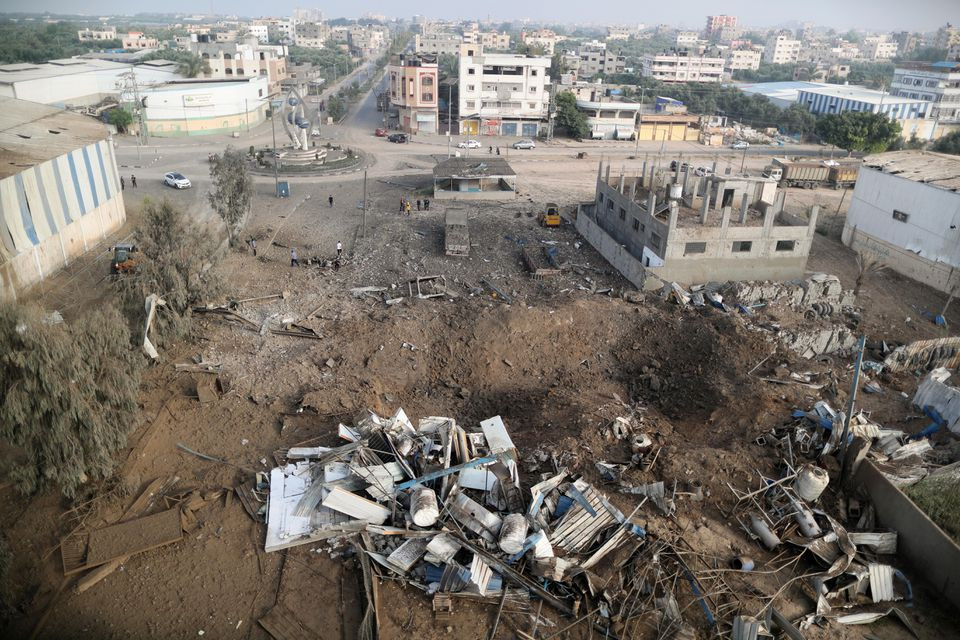 The holy city of Jerusalem has been tense during the Muslim fasting month of Ramadan, with the threat of a court ruling evicting Palestinians from homes claimed by Jewish settlers adding to the friction.

Prime Minister Benjamin Netanyahu said Israel would step up its strikes on Gaza, an enclave of 2 million people, in response to the rocket attacks, which carried on into the early evening. 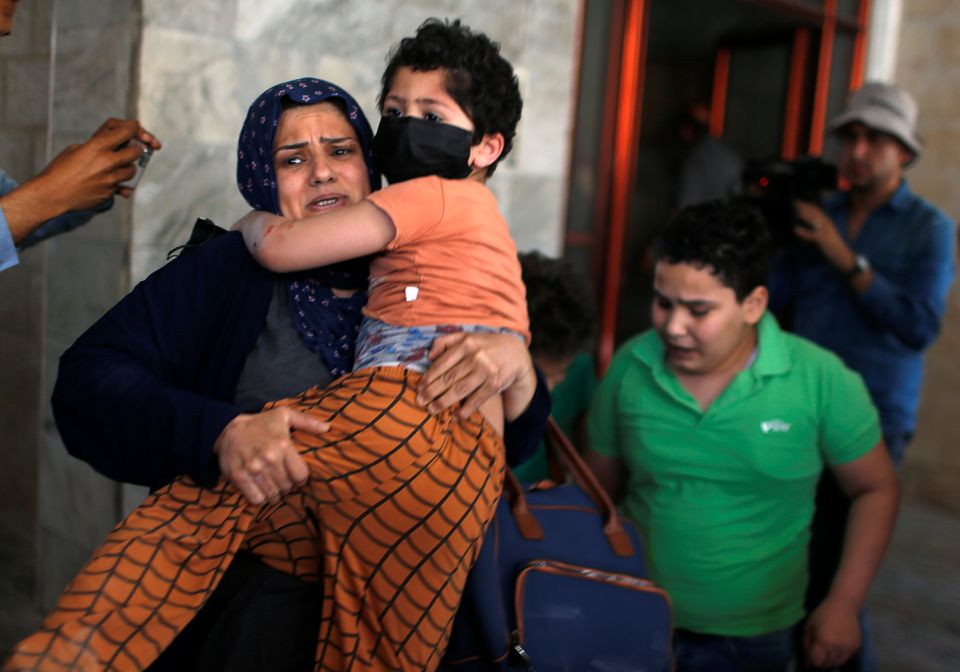 Within an hour, Israel said it had deployed 80 jets to bomb rocket launch sites in and around Gaza City.

Officials said infantry and armour were being dispatched to reinforce the tanks already gathered on the border, evoking memories of the last Israeli ground incursion into Gaza to stop rocket attacks, in 2014. 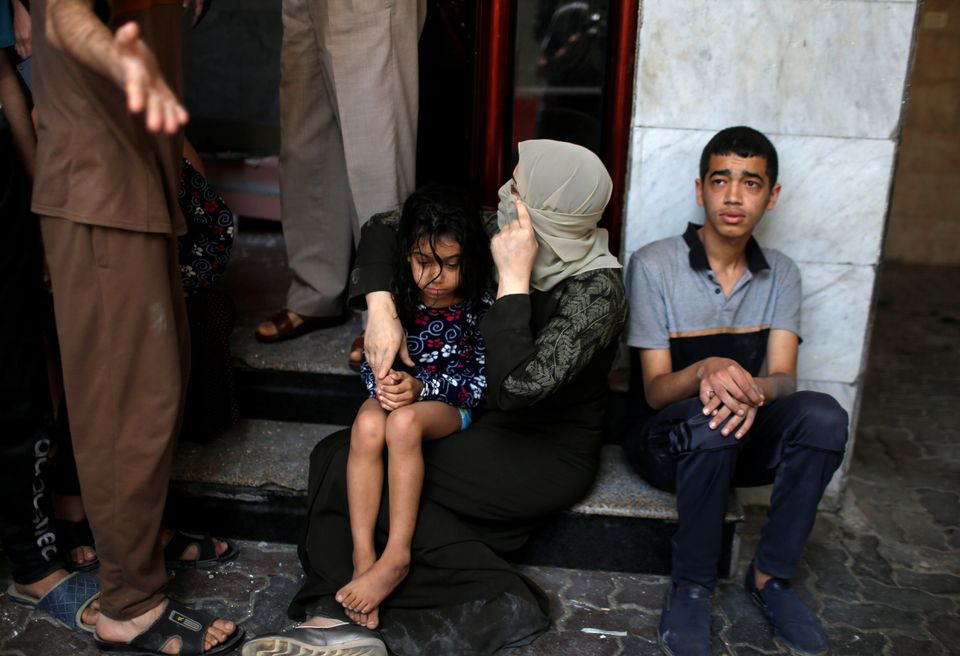 More than 2,100 Gazans were killed in the seven-week war that followed, according to the Gaza health ministry, along with 73 Israelis, and thousands of homes in Gaza were razed.

On Tuesday, before the block collapsed, the Gaza health ministry said at least 28 Palestinians, including 10 children, had been killed and 152 wounded by Israeli strikes since Hamas on Monday fired rockets towards Jerusalem for the first time since 2014.

Israel's national ambulance service said two women had been killed in rocket strikes on the southern city of Ashkelon.

The International Committee of the Red Cross urged all sides to step back, and reminded them of the requirement in international law to try to avoid civilian casualties.

French Foreign Minister Jean-Yves Le Drian condemned the rocket attacks from Gaza into Israel but also said he was concerned at the threat of forced eviction of Palestinian residents in the Sheikh Jarrah neighbourhood of East Jerusalem.