Nawaz Sharif an 'old friend' of China and Beijing does not forget its friends, says Nong Rong

The meeting with the Chinese ambassador took place at the Chinese High Commission. On the occasion, Nong Rong said that Nawaz Sharif is an old friend of China and Beijing does not forget its friends. He also expressed good wishes for the former premier.

The ambassador appreciated Shehbaz's visit and accorded him with a warm welcome, adding that he already knew of Shehbaz because of his "Punjab speed" fame in China. He said that Shehbaz's hard work as Punjab chief minister was very impressive and praiseworthy.

Nong said he could not keep himself from praising Shehbaz for his ability to deliver because he knew this from personal experience as he was a mayor in China himself. He said the two countries can benefit from Shehbaz Sharif's idea, methods and performance in future.

The Chinese envoy said that he endorsed Shehbaz's perspective that nations cannot progress without industrialisation and industrial production. "For this, the philosophy of industrial zones can take this vision forward."

Referring to his visit to the Sahiwal power project, he praised it and appreciated Shehbaz Sharif's efforts. He said the project is considered the most speedily built project not just in Pakistan but all over the world which was inaugurated In May 2017, six months before its scheduled time. 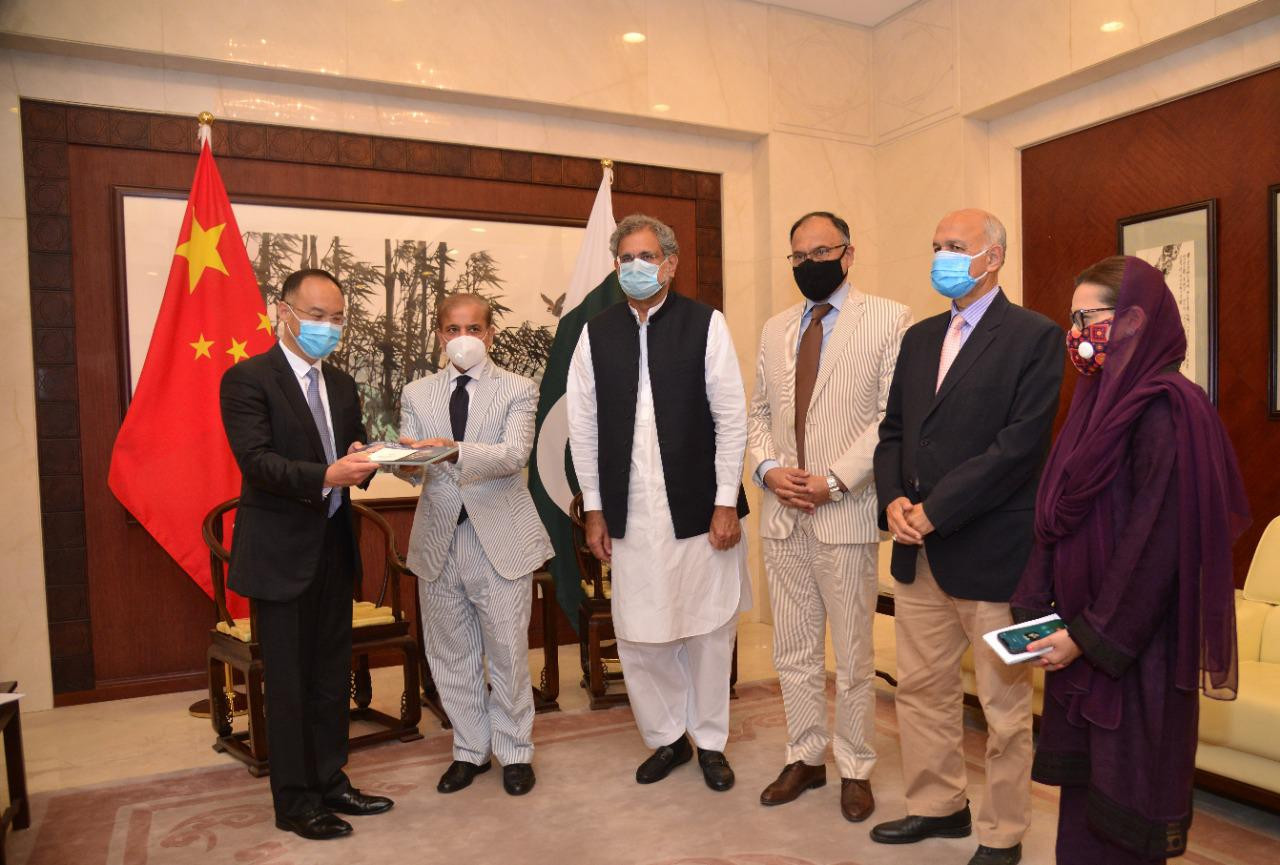 The ambassador invited Shehbaz to China to attend the 100 years of the Chinese Communist Party in July.

The opposition leader in the lower hosue of parliament thanked the ambassador for the invitation and assured that Pakistan and PML-N will ensure that this day is celebrated wholeheartedly. He also pledged that the Communist Party Of China and PML-N will grow closer and their ties will grow stronger.

On the occasion, the former Punjab chief minister said that China is like a second home to Pakistanis and vice versa, expressing how the relationship between the iron brothers would strengthen and deepen in the coming days.

Calling China an exemplary partner and friend of Pakistan, he said that during Nawaz Sharif's term in the government this friendship transformed into a lasting and strong economic partnership. This, he said, marked a new era of the Pakistan-China ties that turned the friendship that is deeper than oceans higher than the Himalayas and sweeter than honey into a bond of iron brotherhood.

Shehbaz, while thanking China and its people, said that China helped Pakistan in an exemplary way during the pandemic. "From sending masks, medics and gear to donating vaccines, thus role of China should be recorded in golden words in the history," he added.

The PML-N president said that the Belt and Road Initiative's (BRI) flagship project the China-Pakistan Economic Corridor (CPEC) is not just an instrument of prosperity for Pakistan but for the entire region.

He paid rich tribute to the resolve of President Xi Jinping and the commitment of former prime minister Nawaz Sharif that could transform the future of not just the people of the two countries but of the region.

"Nawaz Sharif made it possible only within three years that majority of CPEC projects were either completed or were nearing completion. All this was achieved during an ailing economy and 18 hours of power outages but China held Pakistan's hand and took it on the path to prosperity and development," he added.

Meanwhile, Shehbaz also expressed gratitude to Almighty God that the Chinese diplomats were safe in the recent Quetta blast. "This was a conspiracy to derail the ties between two countries."

He said that the protection of all Chinese people in Pakistan is the responsibility of the Pakistani government. He said that special development zones are the solution to all problems for which work needed to be done day in and day out.

This was Shehbaz's first meeting with the Chinese ambassador after his appointment which was held in a pleasant, lively and friendly environment, according to the official statement.

The former chief minister appreciated the UK assistance to Pakistan during the new coronavirus pandemic. He extended his condolences to the UK envoy for the Covid-19 deaths in Britain. "At a time when the pandemic has gripped the entire world, mankind needs to work together against this scourge as it concerns the survival of all humanity."

Issues of regional importance, especially the withdrawal of foreign troops from Afghanistan, were also discussed during the meeting. Dr Turner also wished Shehbaz a happy Ramazan.