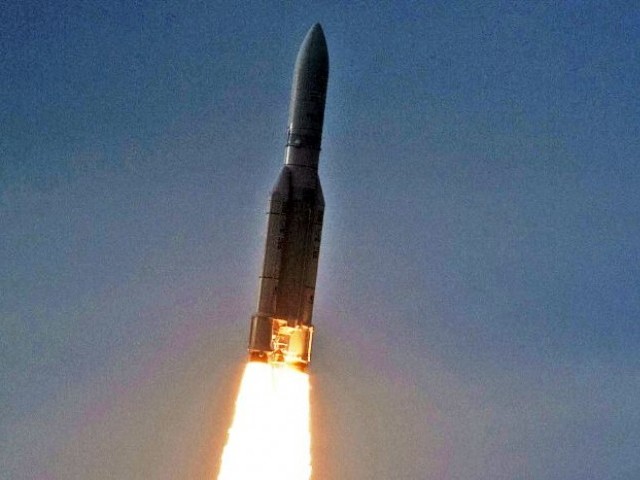 Scientists question whether Suparco’s programme is on the right track. PHOTO: AFP/FILE

Billed as Pakistan’s ‘first’ advanced communications satellite PAKSAT-1R, as a part of Pakistan’s Space Programme 2040, was launched on Thursday at 9:17 pm on board China’s Satellite Launch Vehicle from the Xichang Satellite Launch Centre in Sichuan province.

The geostationary satellite would orbit at 23,000 miles above the surface of the earth and is expected to enhance the broadcast and broadband capabilities of the country. However, some scientists say that what Pakistan Space and Upper Atmosphere Research Commission (Suparco) has achieved today could have been done 30 years ago. They question whether our so-called space programme is on the right track.

Apart from Pakistan Army, there are more than 45 clients of PAKSAT-1R, including leading telecom companies such as Mobilink, and broadcasters such as Geo and ARY.

The PAKSAT-1R weighs 5,115kg and is based on the DongFangHong-4 platform with 18 Ku-band and 12 C-band transponders onboard. The China Great Wall Industry Corporation (CGWIC) had been nominated as PAKSAT-1R’s chief contractor after President Asif Ali Zardari and Chinese President Hu Jintao signed an agreement in October 2008. The company was made responsible for the design, manufacturing, final assembly, testing and launch of the satellite.

Suparco has kept mum about the cost of the multi-million dollar project. Sources within PAKSAT say that at the moment the entire cost has been borne by China which has to be paid back.