It was a beautiful journey: Shaista Lodhi opens up about life after divorce

The Sindh cabinet gave the nod on Tuesday to deploy army in the province in aid of civil powers to ensure adherence to Covid-19 SOPs.

The decision was taken in view of the decisions of the National Coordination Committee (NCC) and the prevailing situation.

Two days ago, on Sunday, Sindh wrote to the federal government, wherein it sought deployment of army personnel in the province.

"The services of armed forces of Pakistan in aid of civil power are required under Article 245 of the Constitution of Pakistan," read a letter penned by the home department to the federal interior ministry.

"Exact nature of deployment of troops and equipment will be communicated in due course of time after carrying out requisite assessment in consultation with [the] quarters concerned," the communique added.

The letter further stated that, "It is, therefore, requested to kindly accord approval for deployment of Armed Forces in aid of Civil Power in the Province of Sindh."

The Pakistan Army was called out on April 23 in aid of civil administration to ensure implementation of precautionary measures against the rampaging novel coronavirus as the prime minister warned the government might impose lockdown in major cities if the spread of the deadly contagion is not contained.

"The provincial taskforce has taken certain important decisions for timely prevention of the spread and dissemination of the disease amongst the masses, which includes banning inter-city transport, ban on visit in jails, closure of educational institutions and government offices" read the letter to SHC.

"The current situation demands reiteration of the similar earlier administrative measures taken and implemented by your honour last year," the letter added.

"I would, therefore, request and urge if the routine court work is suspended and only matters of urgent nature are fixed for hearing, so that the honourable judges, learned lawyers, court staff as well as litigants are protected from the pandemic." 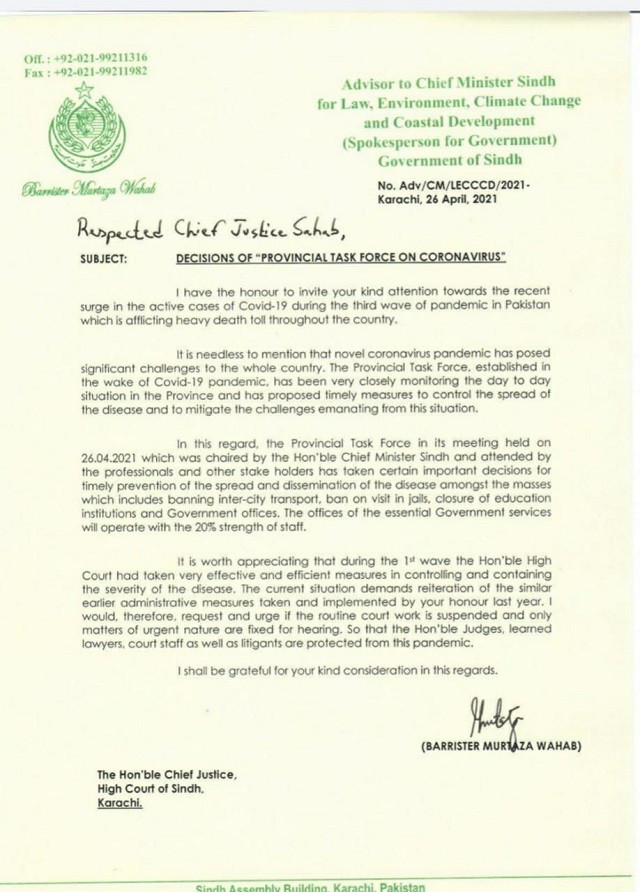 The government also announced that it will grant a compensation of Rs1 million to a government official who dies due to Covid-19 while rendering his or her duties.

It further stated that the contract staffers will also be eligible to receive the compensation. The meeting was apprised that 24 officials have so far died due to the virus.

Earlier, the provincial government announced closing educational institutions and government offices in view of a surge in virus cases.