Arsenal owners have 'no intention' of selling after Super League backlash 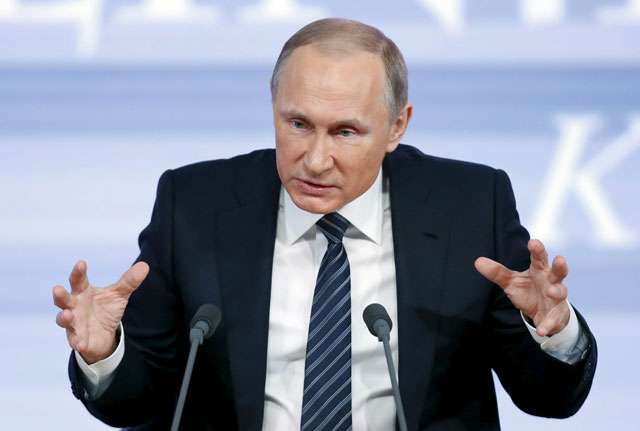 Russia announced on Thursday it was ordering troops back to base from the area near the border with Ukraine, apparently calling an end to a buildup of tens of thousands of soldiers that had alarmed the West.

The currencies of both Russia and Ukraine rose sharply after the announcement, signalling relief among investors just hours after Russia also ended war games in Crimea, the peninsula it occupied and annexed from Ukraine in 2014.

A confirmed pullout of the troops brought in on top of the permanent contingent will likely be welcomed by Western countries that had been expressing alarm at the prospect of further Russian intervention in eastern Ukraine. Russian-backed separatists have been fighting the Ukrainian government in the region since 2014.

The Ukrainian president’s spokeswoman said this month that Russia had more than 40,000 troops deployed on Ukraine’s eastern border and over 40,000 in Crimea. Around 50,000 of them were new deployments, she said. Moscow has not provided any troop numbers.

In a tweet, President Volodymyr Zelenskiy said Ukraine "welcomes any steps to decrease the military presence & deescalate the situation in Donbas (eastern Ukraine)", adding "Grateful to international partners for their support".

Foreign Minister Dmytro Kuleba had told Reuters Kyiv did not know whether Moscow intended to launch an attack or not, and said the West must make clear it would stand with Ukraine if Russia did so.

US State Department spokesman Ned Price said Washington was aware of Russia's announcement and was watching the situation on the border closely. "We've heard words. I think what we'll be looking for is action," Price said.

Russian Defence Minister Sergei Shoigu said he had ordered troops involved in exercises to return to their bases by May 1, as they had completed what he called an "inspection" in the border area.

"I believe the objectives of the snap inspection have been fully achieved. The troops have demonstrated their ability to provide a credible defence for the country," Shoigu said.

Military hardware was to be left at a training ground near the city of Voronezh, about six hours' drive from Ukraine, so that it could be used again later this year in another big scheduled exercise.

Hours earlier, Shoigu had attended manoeuvres in Crimea, which Moscow said involved 10,000 troops and more than 40 warships. Russia also announced it had arrested a Ukrainian man in Crimea as a spy.

The troop buildup near Ukraine was one of several issues that have raised tensions between Russia and the West.

Last week, the United States tightened sanctions on Russia over accusations that it had hacked computers and meddled in US elections, and the Czech Republic accused Moscow of a role in deadly explosions at an arms dump in 2014.

Western countries have also urged Russia to free jailed hunger-striking opposition figure Alexei Navalny, with Washington warning of "consequences" should he die in prison. Russia says the West should not interfere.

In a major speech on Wednesday, President Vladimir Putin sounded a defiant note, warning Western countries not to cross unspecified "red lines". But Putin is also participating this week in a climate summit organised by US President Joe Biden.

In Moscow, the Kremlin said Putin was aware of an invitation from Ukrainian President Volodymyr Zelenskiy to meet to discuss the crisis.

“If the president considers it necessary, he will reply himself. I have nothing to say on that now,” spokesman Dmitry Peskov said.