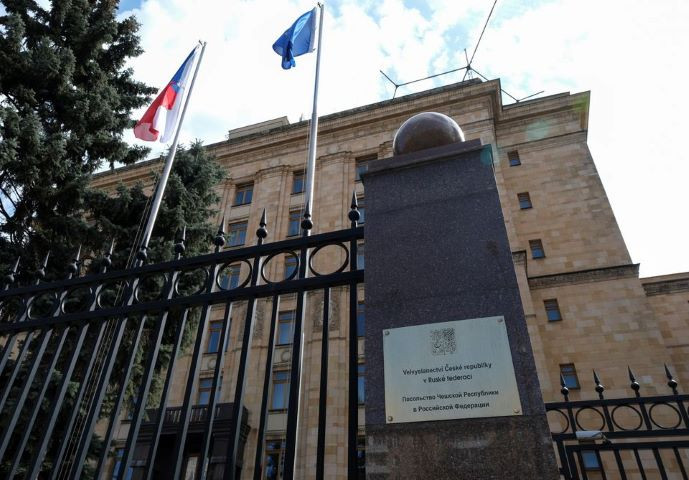 A view shows the embassy of the Czech Republic in Moscow, Russia, April 18, 2021. REUTERS

The Czech Republic said on Monday Russia's eviction of 20 Czech embassy employees in response to Prague's expulsion of 18 Russian staff was a stronger-than-expected reaction and the government would consider further steps.

Prague expelled the Russian diplomats on Saturday, saying it suspected that Russian intelligence had been involved in explosions at an ammunition depot in October and December 2014.

Moscow has denied any of its agents were involved in the blast, which killed two people, branding the Czech stance a provocation. The row is the biggest between Prague and Moscow since the end of Soviet domination of eastern Europe in 1989.

The Czech Republic's acting foreign minister, Jan Hamacek, said he had asked other European Union foreign ministers during a video conference on Monday for "an expression of solidarity".

"The reaction (by Russia) is stronger than we had expected, it is more diplomats than the number of intelligence officers we expelled," Hamacek told a televised news conference.

"I will meet the prime minister and discuss if and when the Czech side may need to take some further steps."

Commenting later on the 2014 attack, Prime Minister Andrej Babis rejected opposition claims that it amounted to state terrorism, but said it was an unacceptable operation by Russian agents that went wrong.

"Russia was not attacking the Czech Republic. The agents attacked - we can call it a terrorist act by these agents - the goods of a Bulgarian arms trader, who was probably selling these arms to parties fighting Russia," Babis told a news conference.

"The ammunition was supposed to explode en route. Of course it is unacceptable that GRU agents were undertaking the operation here - which they bungled," he said.

In an interview with a local newspaper, Hamacek confirmed the trader to have been Emilian Gebrev, an arms factory owner who survived an attempt to poison him in 2015. Bulgarian prosecutors charged three Russians in absentia in 2020 with his attempted murder.

Gebrev's company EMCO denied on Monday that it had made or planned any shipment from the Czech warehouse in the months before the explosion or for at least a year after the blast.

Prague has previously said the warehouse blast was caused by the same agents of Russia's GRU military intelligence blamed for the poisoning of former Russian spy Sergei Skripal in Britain in 2018. Moscow also denies involvement in the Skripal case.

Czech Prosecutor General Pavel Zeman said on Monday photocopies of passports had helped investigators to determine that the main suspects in the blast were the same as those charged by British prosecutors with the 2018 poison attack in the English city of Salisbury.

Russia's Foreign Ministry criticised Prague's decision not to disclose all details of its investigation to Moscow and described the affair as a blow to bilateral relations.

The Kremlin, commenting on the allegations and on the subsequent diplomatic expulsions, called the Czech Republic's actions "provocative and unfriendly".

The Czech Foreign Ministry said the Russian Embassy in Prague had 129 diplomats and other personnel, and two regional consulates - about twice the size of the Czech Embassy in Moscow, which the Russian countermeasure left severely hit.