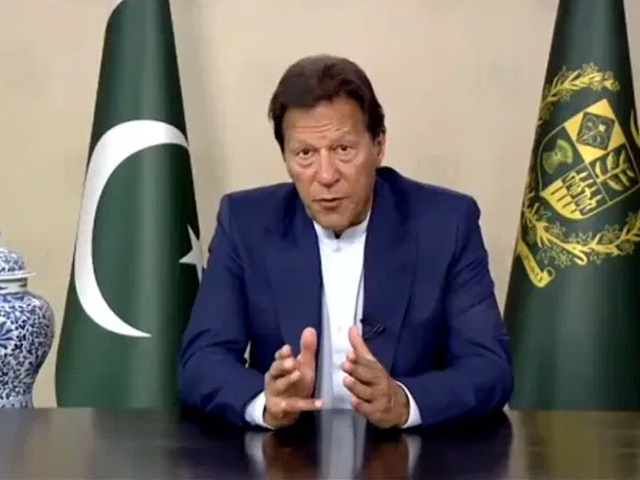 Prime Minister Imran Khan on Tuesday said the Tehreek-e-Labbaik Pakistan (TLP) would not be allowed to create unrest under the guise of staging a protest, as the federal cabinet allowed the deployment of the paramilitary Rangers in several cities of Punjab.

“The government was constantly negotiating with them [TLP] but they were preparing for a protest,” he observed while chairing the federal cabinet meeting.

“We received information about some miscreants using the march as an opportunity to disturb law and order. We can’t allow that to happen.” The premier noted that the next 24 hours were important and hopefully the protests would subdue by then. The cabinet approved the deployment of Rangers in Lahore, Rawalpindi, Gujranwala, Jhelum and Bahawalpur to bring the law and order situation under control.

The PM had also held a separate meeting with the army chief on national security issues.

Later at the post-cabinet briefing, Science and Technology Minister Fawad Chaudhry told reporters that dictation from any party or group was unacceptable but they could present their demands in a democratic way. “Negotiations could be held [on the demands],” he said, referring to the protests.

The minister maintained that things would be fine soon. “No group or party … must not even think of dictating to a government or the state. If the state allows this, then it will disintegrate and there will be chaos.”

Fawad said the government wanted peace and tranquility but it was inappropriate to hinder the movement of oxygen cylinders, as already over 4,100 coronavirus patients needed extreme care. The minister also said the opposition’s plan to send the government packing was now buried after the “demise” of their alliance, the Pakistan Democratic Movement. “I had already predicted that alliances that not based on ideology could not remain intact for a long time,” he added. “Time has proven that I was correct as the PDM was formed to protect personal interests,” he said, adding that the PDM had become of a relic of the past, “therefore, the opposition should end the politics of resignations [from the assemblies]”.

The minister maintained that the PPP had a stake in the system and that was why it was against the resignations.

“The PML-N [Pakistan Muslim League-Nawaz] and the JUI-F [Jamiat Ulema-e-Islam-Fazl] should also reconsider their future strategy,” he added “[JUI-F chief and PDM president] Fazlur Rehman told the PPP not to make BAP [Balochistan Awami Party] its ‘Baap’ [father] though it was their [opposition parties] internal matter,” Fawad said.

He further claimed that the PML- N leadership had expelled PPP leaders Sherry Rehman and Qamar Zaman Kaira from the alliance’s WhatsApp group. He reiterated the government’s offer to opposition parties to bring their proposals for electoral reforms. “They [opposition] should set aside their egos and cooperate with the government for institutional reforms,” he added. “In the next phase, judicial reforms can be taken up.” Responding to a question about the PDM, the minister said that five constituent parties of the alliance had no member in parliament. “Therefore, the government would like to talk to the PML-N, the ANP and the JUI-F on reforms.”

Fawad said the digitalisation of the cabinet had been completed and that would save Rs510 million every year. “From next week, each member of the cabinet would receive a tablet and the agenda would be shared digitally,” he added. “I will also request the National Assembly speaker and the Senate chairman to step up the process of making both the houses paperless as early as possible.”

Fawad said Planning and Development Minister Asad Umar, who heads the National Command and Operation Centre (NCOC) which serves as the nerve centre for the country’s combined efforts to curb the spread of Covid-19, briefed the cabinet on the coronavirus situation. “In the third wave [of the disease] there are 4,200 patients in a serious condition,” he explained. “In the first phase, there were 3,200,” he said. Fawad, quoting Umar, also said the next two weeks were crucial and following precautions were vital.

He said a logistic committee of the cabinet headed by Ali Zaidi had been formed that would present its recommendations about the import of coronavirus vaccine. The cabinet, he said, also gave approval to the establishment of a Central Business District in Lahore which would comprise two projects — Walton Road comprising 350 acres and Wahdat Colony spread over 270 acres. The cabinet also gave the nod to the establishment of a registration authority for geographical indicator tags for Pakistan’s agricultural and non-agricultural products to maintain their national identity.

“Geographical indicator tags for Pakistani mangoes, precious gems, and other products will be acquired for their protection as Pakistani products in the international market.” Fawad said succession certificates was a major issue for overseas Pakistanis as they had to come to the country and obtain them from the courts.

“But now NADRA [National Database and Registration Authority] system would be installed in embassies and they would get succession certificates from there.” The minister further said the cabinet had also approved the proposal of setting up a Litigants Facilitation Centre in Islamabad and the CDA would construct this building. He said the rules of business had been amended to empower the ministries so that they could make their own decisions. The minister said that the cabinet had given its approval to the midterm budget strategy paper, which was presented before it. The cabinet was informed that remittances have reached $21.5 billion which was a record and “evidence of overseas Pakistanis’ trust in the leadership of Prime Minister Imran Khan”.

The cabinet also was informed that exports had reached $18.7 billion mark whereas they stood at $17.4 billion last year. “Imports worth $39.5 billion were registered this fiscal year whereas last year they stood at $34.5 billion,” the minister said.

Fawad said economic growth had reached 3% mark which would hit 5.1% by 2023-24. He added that foreign exchange reserves were now enough for three and a half months. The minister said in the upcoming Public Sector Development Programme (PSDP), special additions would be made and disparity in the salaries would be addressed. He said Zaireen Management policy and reduction in student’s visa fee were also approved.

Speaking about estranged PTI leader Jahangir Tareen, the minister acknowledged that he was an important part of the party. “When and if he would invite us or host a dinner, we will definitely go there.” Fawad continued that Tareen was not alone in facing cases, and already ministers, including Aleem Khan and Sibtain Khan went to jail and obtained bail to fight their cases. “[PTI leader] Babar Awan resigned and is back again,” he added About inflation, he said the prices of sugar and flour were already declining and sales at Utility Stores had touched an unprecedented Rs1 billion.

To a question about the cabinet reshuffle, the minister said the process was in its final stage. “It’s the prime minister’s prerogative under Article 90 of the Constitution to decide who should be a minister and what ministry be allotted to whom.”