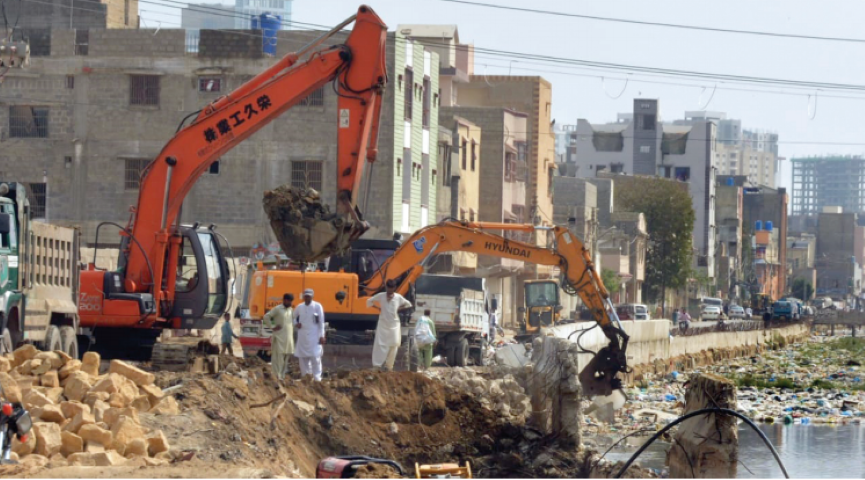 DEMOLITION DRIVE: Officials use heavy machinery to clean and extend the Qayyumabad drain ahead of next monsoon season. Photo: Express
KARACHI:

Residents of slums in Manzoor Colony have stopped the demolition of thousands of homes by mapping flood risks from clogged drains, offering a feasible solution to other informal settlements facing climate change impacts, urban experts said.

After unexpectedly heavy rains flooded much of Karachi last year, authorities said some slum settlements would be removed to allow drains to be widened, with hundreds of homes in Manzoor Colony settlement earmarked for demolition. Residents, who had always insisted that the flooding was mainly caused by drains blocked with rubbish and sludge, teamed up with nonprofit organisations to map the drainage network.

"They generated their own evidence to uncover the reasons - overlooked by authorities - why Karachi floods," said Arif Hasan, an architect and planner, who backed the mapping project. "The communities believed that if these obstructions are removed and the drains are cleaned and maintained, flooding will not take place," he told the Thomson Reuters Foundation.

About 12 million people out of Karachi's 16m population live in informal settlements, and are increasingly vulnerable as Pakistan's largest city faces worsening inundations as the South Asian monsoon brings extreme weather. Karachi, Pakistan's financial hub, has a network of 550 stormwater drains that criss-cross the city and empty into the Arabian Sea. Many are blocked by illegal construction and waste.

Authorities say they clean out the drains every year before the monsoon, except last year when the provincial government did not provide funds. The unusually heavy rains killed dozens, submerged main roads, and inundated hundreds of homes. To map Manzoor Colony's drains, a team from the nonprofit Technical Training Resource Centre (TTRC) walked along with them with residents, photographing, marking and mapping more than a dozen blockages. Their map showed only about 40 houses needed to be removed to leave the drains clear, said Mohammad Sirajuddin, head of TTRC, who led the mapping project.

"The authorities said thousands of houses would need to be demolished, but our maps showed otherwise." In November, residents successfully halted the planned demolitions in Manzoor Colony. While it is not certain whether authorities will use the community's flood risk map in the future, the residents now know where the choke points are and how they can tackle the dangers, Sirajuddin said. Two other informal settlements in Karachi are being mapped, with residents - especially young people - trained, he said, adding that the model can be replicated across the country. These maps also generate crucial data on households, said Nausheen Anwar, director of the Karachi Urban Lab.

"The maps provide a process through which consensus can be built and inclusion of all residents can be negotiated to stave off evictions and establish a basis for just compensation and resettlement," she said.

By 2030, more than half of Pakistan's projected 250m population is expected to live in cities, compared to 36 percent now, according to the United Nations.

"When youths in the settlements are trained in mapping, they better understand the risks they face," said TTRC's Sirajuddin, "they understand their rights, and can fight evictions."