Sindh Education Minister Saeed Ghani announced on Sunday the suspension of on-campus classes for grades I to VIII for 15 days, from April 6 (tomorrow) to April 21, in all public and private schools of the province.

The education minister said the decision had been taken keeping in view the worsening pandemic situation. He added that during the said period, schools could conduct online classes, correspond with students and parents via WhatsApp and email, and parents could visit schools to collect homework.

A notification announcing the same was also issued by the Sindh Education and Literacy Department on the day.

The announcement came on the heels of Federal Education Minister Shafqat Mahmood’s tweet stating that all education and health ministers are to convene at the National Command and Operation Centre (NCOC) on Tuesday to decide whether to keep open or close educational institutions.

The Sindh education department’s notification stated, “In the wake of [the] ongoing third wave of [the] Covid-19 pandemic and with the approval of the competent authority, the classroom teaching and learning activities from class ECE to VIII in all public and private institutions under the administrative control of [the] School Education and Literacy Department… are hereby suspended with effect from April 6, 2021 to April 21, 2021.”

Besides, the schools have been bound to abide by guidelines outlined in a notification dated November 27, 2020.

Teaching staff have also been asked to visit schools regularly for homework and assignments. 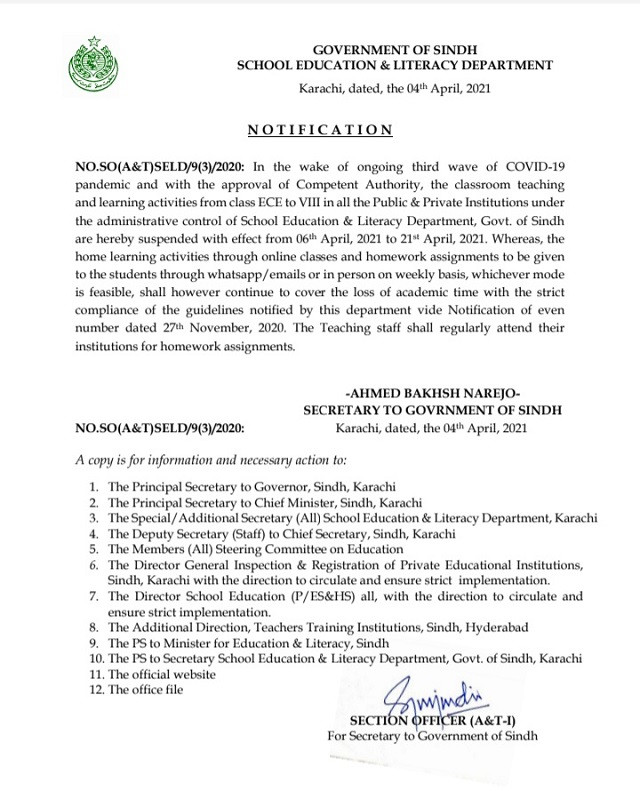 Reacting to the education department’s directives for closure, the Private Schools Association issued a statement, rejecting the decision. The association contended that at the end of the academic year, schools could not be shut for two weeks or more.

“Schools should be kept open until the imposition of complete lockdown,” read the statement.

Already, 20 million children did not return to schools after the closure of educational institutions due to the outbreak of the pandemic, it maintained, urging the government to adopt a smart lockdown policy instead.

It was further said that the closure of schools has already resulted in the unemployment of several teachers.

Earlier, a 15-day closure of schools to contain the spread of the coronavirus amid a third wave was proposed during a meeting of the taskforce on coronavirus on Friday.

In the meeting, Sindh Chief Minister Syed Murad Ali Shah had directed Ghani to discuss the matter with all stakeholders, including the managements of private schools, and then make a decision.

The possibility was mulled during a meeting of the education department’s steering committee on Saturday, said Ghani.

“All stakeholders were apprised of the current situation in the meeting and it was proposed that if the provincial government and the health department deemed it better to close schools to curb the spread of the virus among children, the education department could suspend on-campus classes,” he added.

However, the representatives of private schools had opposed the idea of suspending physical classes.

According to Ghani, the decision for the suspension of classes was finalised in a task force meeting headed by Sindh Chief Minister Syed Murad Ali Shah on Saturday evening.

“All these measures have been taken to protect children against the coronavirus,” he said.

(With additional input from DNA)