Chairman of National Command and Operation Centre (NCOC) Asad Umar on Tuesday asked chief ministers of all provinces to ensure adherence to the directions of the authority to deal with the third wave of COVID-19.

In a letter penned to all chief ministers, Umar said that "violations of NCOC instructions, specifically in political and social gatherings have been observed."

These violations, he noted, have been obstructing effective enforcement of SOPs in other sectors too and sending wrong signals to the general public.

"In view of the surge in cases and [the] corresponding pressure on healthcare system, may I request you to ensure employment of all administrative tools for across-the-board implementation of NCOC's instructions, especially those related to public gatherings."

Umar hoped that "we will be able to thwart further spread of this contagion with our collective efforts." 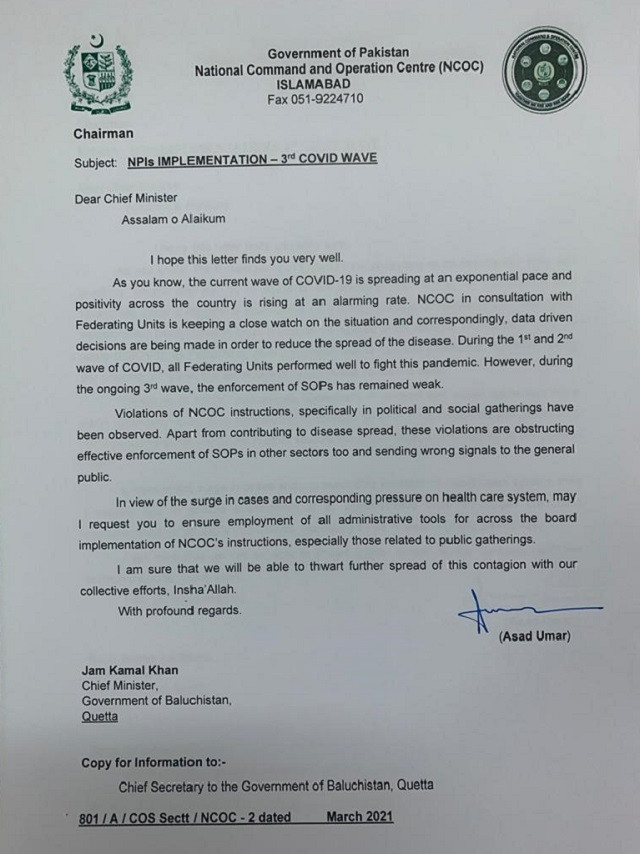 Pakistan has seen a sharp rise in coronavirus cases, reporting at least 100 death due to the virus during the past 24 hours—the highest since December last year.

According to National Command and Operation Centre (NCOC), Punjab witnessed the most deaths during the period, totaling 73, followed by 18 in Khyber-Pakhtunkhwa, four in Sindh, two each in Islamabad and Azad Jammu & Kashmir, and one in Balochistan.

The total cases across the country currently stand at 663,200, with the active cases touching the mark of 48,566. Some 600,278 people have so far recovered from the virus.