Ship stuck in Suez like a 'beached whale', firm aiming to free it

The Supreme Court on Thursday restored Punjab’s local governments, which were dissolved by the Pakistan Tehreek-e-Insaf led provincial government on May 4, 2019, years ahead of their prescribed term – January 1, 2022.

"For reasons to be recorded separately, constitution petition No 48 of 2019 is allowed and Section 3 of the Punjab Local Government Act, 2019 is declared to be ultra vires of the Constitution and the local governments as were existing in the province of

Punjab prior to promulgation of the said section stand restored and it shall complete its term in accordance with law," the short order announced by a three-judge bench says.

During the hearing, Attorney General for Pakistan Khalid Javed Khan, who was summoned on court's assistance, questioned

Section 3 of the Punjab LG Act, 2019, which had empowered the Punjab government to dissolve the LG system before the expiry of its term.

Punjab Additional Advocate General Qasim Chohan said that the LG system was brought to an end by virtue of Section 3(1) of the Punjab LG Act, 2019.

Section 3(1) states, “All local governments constituted or continued under the Punjab Local Government Act, 2013 (Act XVIII of 2013) are hereby dissolved.”

The provincial AAG stated that the SC restored LGs after the AGP’s statement.

He wondered why the AGP gave a statement against the law, which was made by the Punjab government.

Umer Gilani advocate, who on behalf of the local bodies’ representatives had challenged dissolution of the LGs, narrated the two-year history of this matter.

On May 5, 2019, around 56,000 elected local government officials of Punjab were sent packing. Immediately afterwards, as many as 39 different writ petitions were filed in the Lahore High Court (LHC) against this dissolution. The then Chief Justice Mamoon Rashid Shaikh constituted a three-member bench to hear the petitions. Between July and November 2019, this bench conducted more than half a dozen hearings but did not decide the matter despite protests from the petitioners' counsels.

In March 2020, frustrated with the inability of the LHC to decide their case either way, the deposed LG representatives knocked the doors of the Supreme Court under Article 184(3) of the Constitution. Initially, the registrar returned the petitions as non-maintainable.

In July last year, a special bench of the apex court led by Justice Mushir Alam, while hearing the matter, issued a notice to the AGP as well as the Punjab advocate general. The bench had also hinted at issuing an order regarding the restoration of LG Act, 2013.

Interestingly, the bench was changed and the case was clubbed with the petitions of the Muttahida Qaumi Movement (MQM) and the Pakistan Tehreek-e-Insaf (PTI) against the Sindh LG Ordinance, 2013. 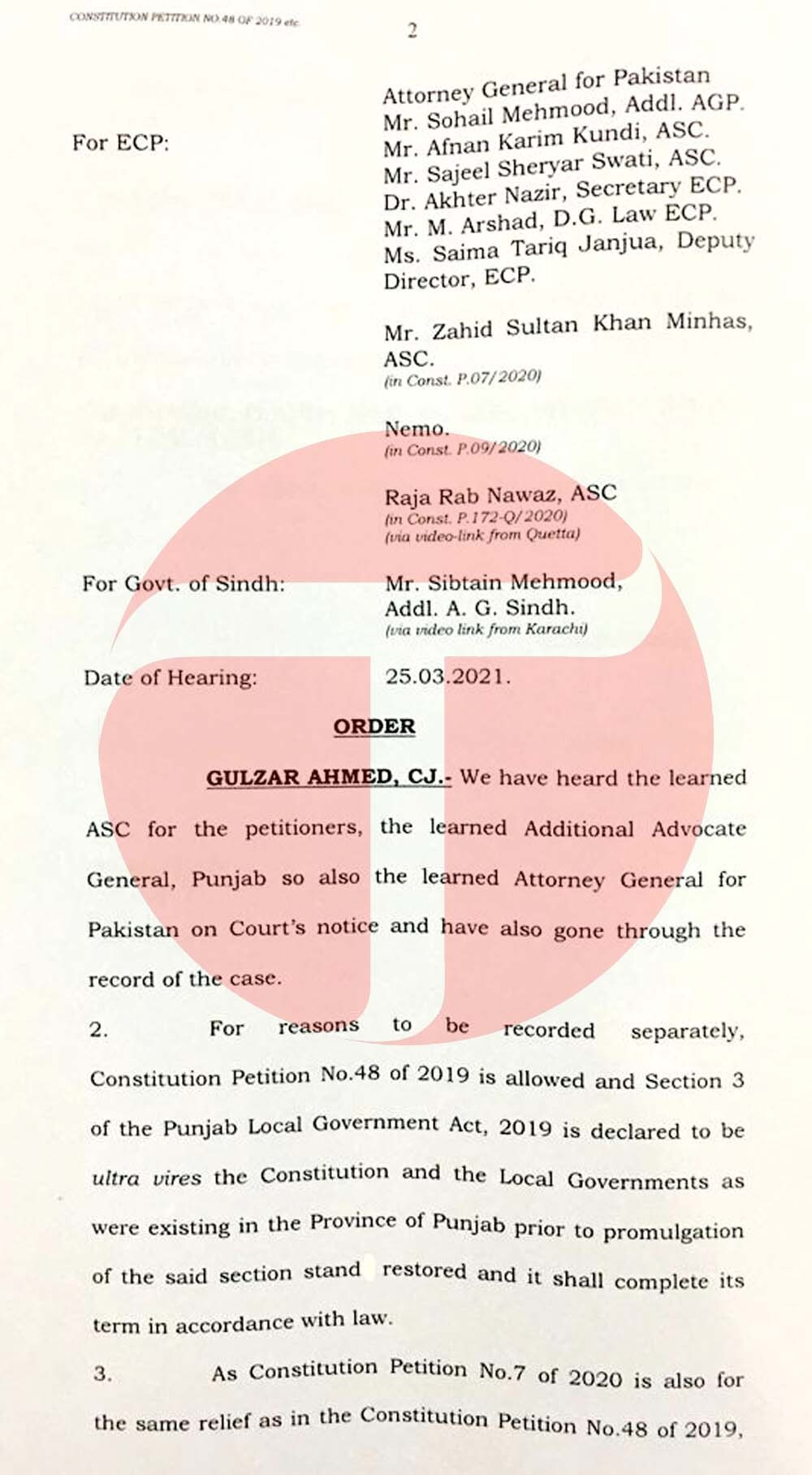 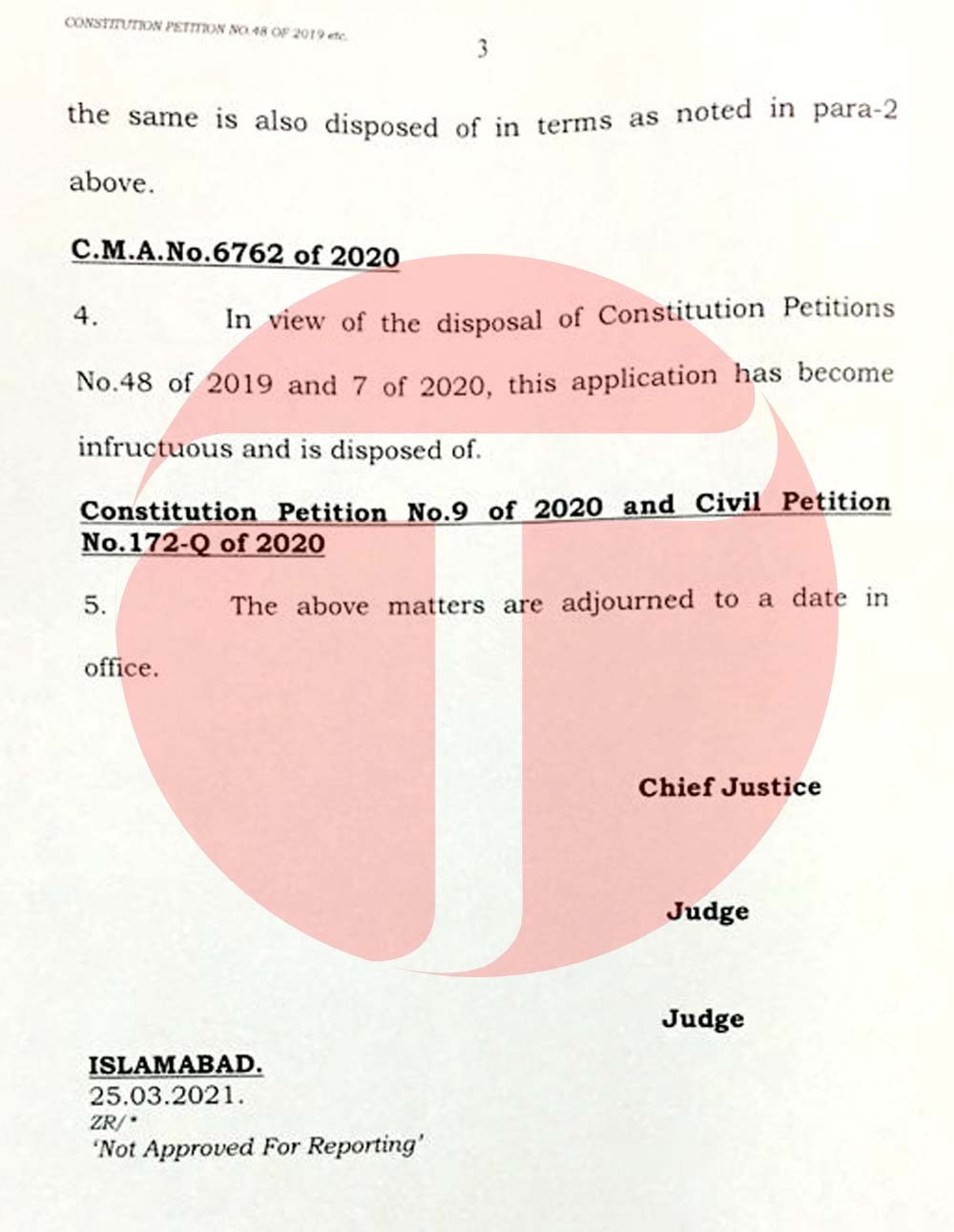 A three-judge bench of the apex court led by Chief Justice of Pakistan Gulzar heard the MQM’s petition. In October last year, the bench, while reserving its judgment, had noted that the court would give guidelines, regarding enforcement of Article 140-A of the Constitution for all over the country. However, the constitution petitions against the Punjab LG Act, 2019 remained pending.

In the meanwhile, another bench led by Justice Qazi Faez Isa on November 18, 2020, took up the matter regarding delay in LG polls in Khyber-Pakhtunkhwa.

In February, when the bench led by Justice Isa resumed hearing of the case, Chief Election Commissioner (CEC) Sikandar Sultan Raja told that dissolution of LGs in Punjab before expiry of their term was illegal/unconstitutional.

AGP Khan also stated before the bench that the LGs are mandated by the Constitution and that he has always disavowed arbitrary dissolution of any elected body.

The state’s top law officer said he had always decried the erstwhile Article 58(2)(b) of the Constitution, which empowered the president to dissolve parliament.

On March 15, a division bench of the apex court led by Justice Isa took strong exception over non-fixation of the constitution petition against dissolution of LGs in the province of Punjab.

The court noted that election matters must be dealt with on a priority basis. The criticality of the said petition was even greater because it had challenged the Punjab Local Governments Act which had disenfranchised the people and sent 56,000 elected representatives home, and who were substituted by the bureaucracy of the province.

The bench noted that they were informed that the last hearing in the said petition took place on October 26, 2020 and since then, five months had passed but the petition had not been fixed for hearing.

The court, expressing anger, said that by not fixing the petition for hearing, the registrar undoubtedly undermined the people’s perception of the independence of the Supreme Court.

The judgment noted that the SC registrar should have ensured that the said petition be fixed at the very earliest. However, unnecessary objections to its maintainability were first raised and then it took a few months before the petition was placed for hearing in court.

"The progress of the petition was further delayed when, after issuance of notice by this court, the registrar did not fix it for hearing.

If election matters are not decided at the earliest, people lose faith in democratic institutions. The said petition raised questions of immense public importance as the people of the most populous province of the country had been disenfranchised at the local level."

SC to take up resource distribution plea on 25th

SC takes up plea for distribution of resources on 25th

Rupee stands at the crossroads