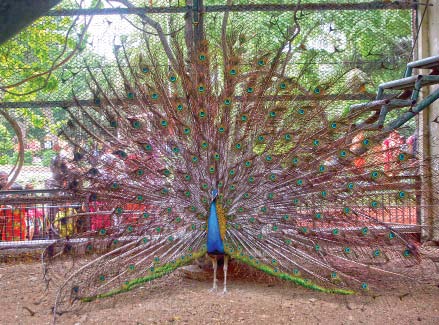 In a first, the Sindh Wildlife Department (SWD) has launched a survey to count the number of peafowls inhabiting Tharparkar district, with 42,000 birds already counted across 52 villages over the past two weeks.

The move comes in the backdrop of multiple peafowl deaths being reported in Tharparkar, where the birds are found in abundance and considered the beauty of the desert region.

Peafowl deaths remain to be a common occurrence in summers, even with villagers, conservationists and local organisations engaging in efforts to save the vividly-coloured bird.

Over the years, little has been known about these winged species in Sindh, in the absence of statistics of the peafowl population in the province and challenges and problems that the bird faces.

Hence, the need for a survey was felt.

In the first phase of the survey, which is already underway, three talukas of Tharparkar district, namely Mithi, Islamkot, and Diplo, will be covered. The second phase will see a recording of the bird population in Nagarparkar and Kaloi and in the third phase, Chhachhro and Daheli talukas will be covered.

The survey has been initiated with the assistance of the International Center for Chemical and Biological Sciences (ICCBS) at the University of Karachi (KU).

According to Mirpurkhas SWD deputy conservator Mir Aijaz Hussain Talpur, 42,000 birds have been counted thus far, over the past two weeks, across 52 villages.

As many as 25,000 villages are yet to be covered, he said, for which SWD teams have just a month's time.

"It is a challenging task, especially because we work under the scorching sun," he added. "Peafowls hide in shady nooks during daytime and we wait for the heat to about and the birds to come out of the shadows."

For the task, the teams have also sought villagers' help.

"In certain villages, local residents help us count the exact number of peafowls," said Talpur, adding that some of the villagers had the impression that the SWD was a non-governmental organisation.

According to Talpur, the bird population is higher in Mithi, Islamkot and Nagarparkar than in other areas of Tharparkar, but nothing can be said with certainty in the absence of accurate data.

"We have to wait for the data," he said.

Of the birds recorded so far, 16 were found sick and transported to the ICCBS for medical examination.

"They have been kept in quarantine at Haleji Lake," SWD chief conservator Javed Ahmed Mahar told The Express Tribune. "Our teams have been deployed to look after the ailing peafowls."

He said the sample of the sick birds had been collected for a virology study, aimed at determining the reason behind "mysterious" peafowl deaths reported every year.

"A mysterious disease has been killing peafowls since 2010," said Mahar. "We have to find the reason behind these deaths."

According to him, the results of the survey thus far indicate the presence of a huge population of peafowls in Tharparkar.

"Annually, 100 deaths in such a large population are normal, but we need to wait for the survey to complete before reaching a conclusion."

When approached, the in-charge of the wildlife sanctuary at Haleji Lake, Rasheed Khan, said one of the ailing peafowls had died.

"However, others are being treated and their health is improving," he added. "All of them were very sick when they were brought here but now they slowly move around and I am hopeful that they will regain health very soon."

He said after complete recovery, the bird would be released in the wild in Tharparkar.

Khan said the environment at the lake is suitable for peafowls and it was for the first time that peafowls were kept in the sanctuary.