Volumes remained subdued amid political unrest due to Senate elections 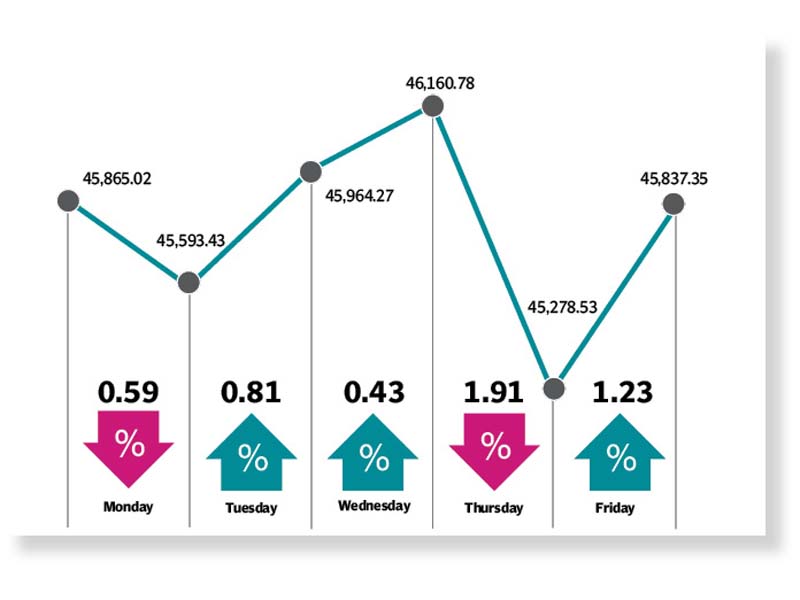 The Pakistan Stock Exchange (PSX) remained under pressure throughout the week as political tensions flared up again, resulting in the benchmark KSE-100 index dropping nearly 30 points during the week ended March 5 to settle at 45,837.

The outgoing week was marked by high volatility, mundane trading, uncertainty over senate poll, and low volumes as sentiments remained dampened by worries in the absence of positive triggers.

Trading commenced Monday on a negative note as the index lost ground due to instability in international crude oil prices. Investors remained cautious regarding the Senate elections as the Supreme Court, during the session, announced that polls for the upper house would be held according to Article 226 of the Constitution and through secret ballot.

Interestingly, the bourse turned bullish on Tuesday after remaining in the red for two successive sessions with investors taking fresh positions ahead of Senate elections on March 3. A few bearish sessions earlier encouraged market participants to go for stock purchases at attractive valuations. Despite the uptrend, investors also remained wary due to the soaring inflation, which spiralled to 8.7% in February, according to the Pakistan Bureau of Statistics (PBS).

Fortunately, ignoring the looming political situation market participants continued the buying spree on Wednesday as well. Optimism came on back of improved cement data, with sales growing 1.98% to 4.577 million tons in February 2021 as compared to 4.489 million tons in February 2020, and surging crude oil prices in the international market. Furthermore, news of release of funds by the government under a deal signed with the independent power producers (IPPs) also positively impacted the investment climate.

The positive momentum did not last and on Thursday the stock market retreated into the negative territory, with the index nose-diving nearly 900 points during intra-day. A major upset in Senate elections and subsequent political developments jolted the stock market as contrary to market expectations Finance Minister Abdul Hafeez Shaikh lost the contest for the Senate seat to former prime minister Yousuf Raza Gilani.

The last day of the week closed in the green as the market recouped more than half of the losses incurred during the previous session. On Friday, the Sensitive Price Indicator (SPI) for the week ended March 4, 2021 recorded an increase of 15% year-on-year, generating investor interest in bank stocks.

Average daily traded volume plunged 35% week-on-week to 386 million shares, while average traded value clocked in at $129 million, down 19% on a week-on-week basis.

Foreigners turned sellers this week as foreign selling clocked-in at $10.7 million compared to a net buy of $0.3 million last week. Selling was witnessed in commercial banks ($10.1 million) and technology and communication ($2.2 million). On the domestic front, major buying was reported by insurance companies ($8.4 million) and banks/DFIs ($8 million).

Among other major news of the week was; trade deficit widened 23.93% year-on-year in February, cement sales rose while exports declined, CPI rate for February rose to 8.7%, rupee touched one-year high of 157.1 against the US dollar and PM approved cross-border yarn import.