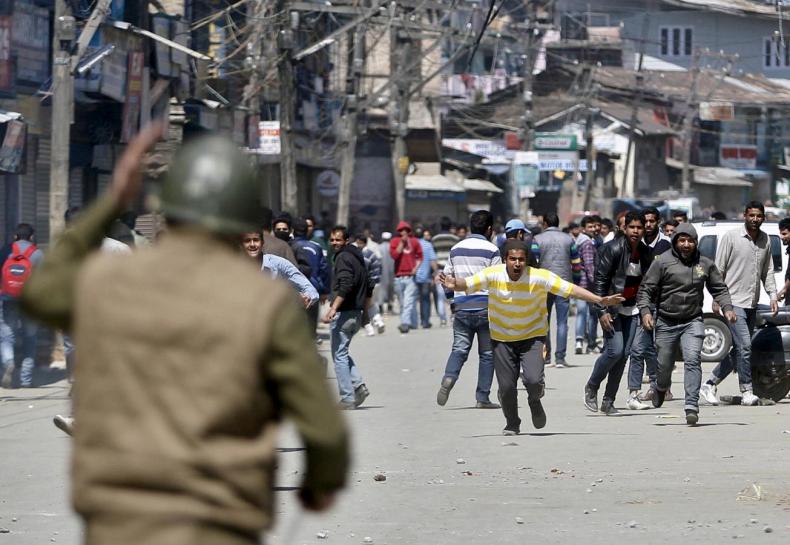 A file photo of a protest in Indian-occupied Kashmir. PHOTO: REUTERS

The annual report states that India’s status declined from 'Free' to 'Partly Free' due to a multi-year pattern in which the Hindu nationalist BJP-led government and its allies presided over rising violence and discriminatory policies affecting the Muslim population and pursued a crackdown on expressions of dissent by the media, academics, civil society groups, and protesters.

“Political rights and civil liberties in the country have deteriorated since Narendra Modi became prime minister in 2014, with increased pressure on human rights organisations, rising intimidation of academics and journalists, and a spate of bigoted attacks, including lynchings, aimed at Muslims,” the report said stressing that the decline only accelerated after Modi’s re-election in 2019.

“Last year, the government intensified its crackdown on protesters opposed to a discriminatory citizenship law and arrested dozens of journalists who aired criticism of the official pandemic response. Judicial independence has also come under strain; in one case, a judge was transferred immediately after reprimanding the police for taking no action during riots in New Delhi that left over 50 people, mostly Muslims, dead,” the report added.

It further underscored that in December, Uttar Pradesh, India’s most populous state, approved a law that prohibits forced religious conversion through interfaith marriage, which critics fear will effectively restrict interfaith marriage in general; authorities have already arrested a number of Muslim men for allegedly forcing Hindu women to convert to Islam.

“Amid the pandemic, the government imposed an abrupt COVID-19 lockdown in the spring, which left millions of migrant workers in cities without work or basic resources. Many were forced to walk across the country to their home villages, facing various forms of mistreatment along the way,” the report stated.

“Under Modi, India appears to have abandoned its potential to serve as a global democratic leader, elevating narrow Hindu nationalist interests at the expense of its founding values of inclusion and equal rights for all,” it added.

“The ruling Hindu nationalist movement also encouraged the scapegoating of Muslims, who were disproportionately blamed for the spread of the virus and faced attacks by vigilante mobs. Rather than serving as a champion of democratic practice and a counterweight to authoritarian influence Modi and his party are tragically driving India itself toward authoritarianism,” the report said.