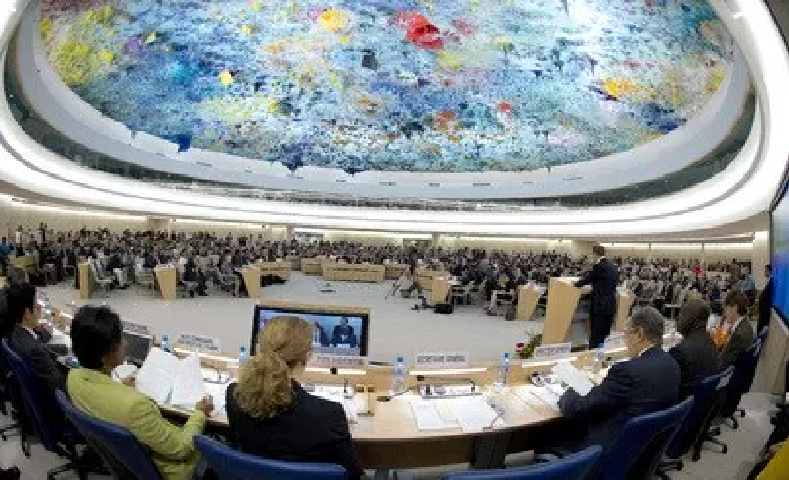 “India has failed and will continue to fail in hiding its brutal repression of the Kashmiri people behind the self-serving smokescreen of terrorism,” Junaid Suleman, the Pakistani diplomat, told the Geneva-based Council in exercise of his right of reply after an Indian representative made oft-repeated allegations about Pakistan’s involvement in terrorism.

“As Pakistan highlights India’s atrocities in Occupied Jammu & Kashmir, which have been well-documented by the office of the UN High Commissioner for Human Rights, UN mandate holders (rights experts) and international NGOs, the Council has yet to hear any response from India - a country that claims to be the world’s largest democracy but has shamelessly violated every human rights principle, norms and laws,” said Suleman, a second secretary in the Pakistan Mission to the UN in Geneva.

The Indian representative, Pawankumar Badhe, had reacted to Pakistan Ambassador Khalil Hashmi’s speech in which the Pakistani envoy had urged the UN rights chief to conduct an impartial investigation into India’s multiple violations of human rights in the disputed territory.

Ambassador Hashmi had also made similar demands when he spoke on behalf of the Organization of Islamic Cooperation (OIC).

Responding to India’s terrorism-related allegations, Suleman said that New Delhi’s “compulsive obsession with Pakistan is neither new nor surprising.”

He pointed out that the Indian government had deployed tools of deflection, deception and disinformation as evident from the EU DisinInfo Lab’s two investigative reports and the “infamous Goswami saga.”

At the same time, he said Pakistan was not the only target of India’s disinformation campaign, citing the shuttering of Amnesty International Office last year and vicious attacks on the UN Human Rights machinery.

“Yet,” Suleman said, “India’s façade of a practicing democracy stands exposed today … its representative can no longer mask the facts that it is in India only where dissent is sedition; where human rights activists are branded as terrorists; and where peaceful protests are treated as part of an imaginary global conspiracy against a failing state.

“From forced conversion to arbitrary denial of citizenship rights, and from State-sanctioned communal violence to apartheid policies, the BJP-RSS regime has now codified the choice between extermination or total submission for India’s minorities, he said.

“With a documented history of pogroms in Gujarat, Muzaffarnagar, Malegnon and most recently in Delhi, many independent observers have been obliged to conclude that in India, a cow is safer than an Indian Muslim.

“No amount of empty rhetoric and dubious grandstanding can alter these hard facts,” Suleman said in conclusion.