Says ECP must take every step to ensure transparency in elections 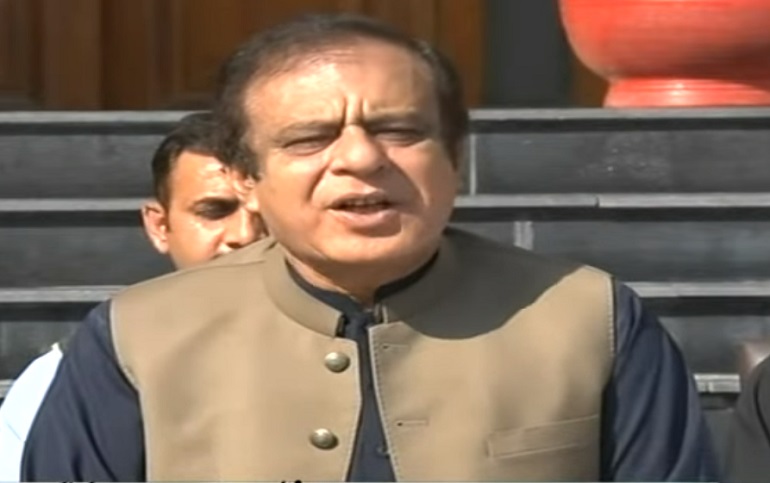 Terming the Supreme Court's opinion regarding secret balloting in Senate elections 'historic', Information Minister Senator Shibli Faraz put the onus of ensuring transparency on the Election Commission of Pakistan (ECP) on Monday, asking it to make use of technology.

"From the opinion of Supreme Court, it seems that Senate elections will be held under secret balloting in light of the Article 226 of the Constitution," the minister said.

The minister observed this while speaking to media persons in Peshawar following the decision. "The honourable judges have stressed the use of technology to make the elections transparent," he added.

Shibli said, "the ECP should take every step to ensure transparency in the polls." He added that the government's decision to seek interpretation of the Constitution was a good move.

"We are the flag-bearers of transparency and a corruption-free society, and are fighting a war [for supremacy] of ideology," he remarked.

On the other hand, opposition parties have always been involved in buying people and their loyalties, he maintained.

He added that those elected on the basis of money cannot legislate against their interests.

"Hafeez Sheikh will win because the people will vote for Imran Khan and his ideology," Shibli added.

Concluding, he said, "we don't want to pressurise institutions as we want them to make their decisions independently."

Earlier today, announcing the much-anticipated decision on the Senate polls presidential reference, the SC announced that Senate elections should be held through secret ballot under Article 226 of the Constitution.

However, in its opinion, the top court stated that the ECP was empowered to take all measures to curb corrupt practices under Article 218(3).

The decision was taken with a 4-1 majority. "Secrecy is not absolute," the decision added.

Attorney General of Pakistan (AGP) Khalid Jawed Khan said the ECP is constitutionally bound to follow the opinion of the SC and implement it for the upcoming Senate elections, scheduled for March 3.

He said the SC’s opinion was binding, and ignoring or violating it would amount to contempt and misconduct.

Khan said it is for the ECP to use technology and choose a method such as marking the ballot paper with a bar code or serial number, as secrecy has been held not to be absolute and eternal.

“The polls shall be by secret ballot but secrecy may end there,” he said.

The ECP is bound to print identifiable or traceable ballot papers. Under Section 122(5) of the Election Act, 2017, the ECP is empowered to print ballot papers as it may prescribe, the AGP observed.

Khan further said that no change in the law is required to give effect to the SC opinion as Article 122(5) refers to an existing law.

“That has to be done by ECP in light of the SC opinion delivered today,” he added. If, after election, there is any material or evidence suggesting a corrupt practice, then not only the party head, but any citizen can lodge a complaint at the ECP with the available material or evidence against any voting MPA or MNA, the AGP said.

If, he maintained, there is a prima facie case, the ECP is bound to investigate and trace the ballot to see whether any corrupt practice occurred.

“If the authority does not do so, the complainant can go to a court or a tribunal to see if the vote was actuated by a corrupt practice,” Khan concluded.

Meanwhile, the Sindh High Court Bar Association President Salahuddin Ahmed said that until the detailed reasons in the case emerge, the ball is in the ECP’s court.

He observed that with no specific directions or timeline given, the ECP may well hold discussions on the implementation and introduction of the reforms after the elections on Wednesday.