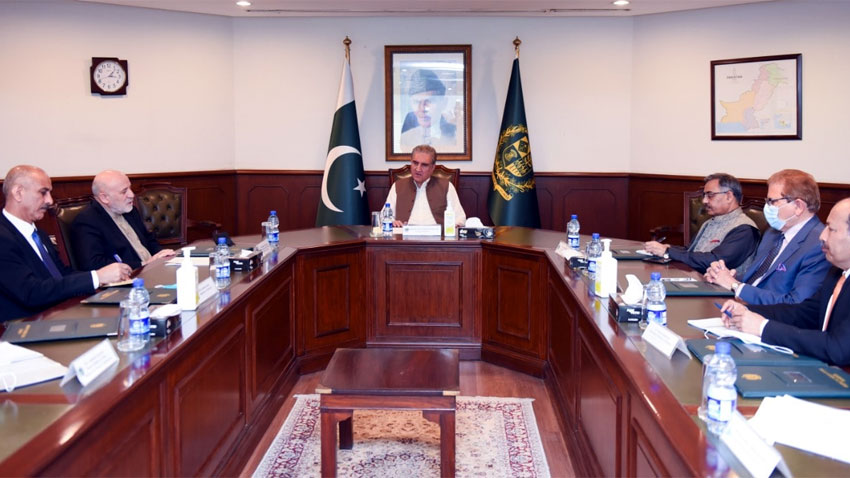 FM Qureshi reiterated that a peaceful and stable Afghanistan was in the best interest of Pakistan. PHOTO: RADIO PAKISTAN

The FM's remarks came during a meeting with the Special Representative of Afghan President, Mohammed Omer Daudzai, who called on him in Islamabad.

FM Qureshi reiterated that a peaceful and stable Afghanistan was in the best interest of Pakistan. "Prime Minister Imran Khan had always stressed that there was no military solution to the Afghan conflict," he said.

He further underscored that the continuing incidents of violence inside Afghanistan served to undermine progress achieved in the Afghan peace process.

"The continuation of violence would strengthen spoilers, who did not wish to see the return of peace in the region," he added.

The top diplomat added that the Afghan leadership must seize the historic opportunity and workout an inclusive, broad-based and comprehensive political settlement for durable peace and stability in Afghanistan and the region.

The foreign minister expressed the hope that the intra-Afghan negotiations would lead to its desired objectives of a sovereign, peaceful and stable Afghanistan.

On February 22, it was reported that Pakistan will attend a crucial meeting later this month in Moscow, which is being convened by Russia with an aim to restart the stalled Afghan peace process, officials and diplomatic sources confirmed.

Russia has launched a diplomatic initiative to arrange a meeting of Pakistan, the US, China and Iran in order to develop a "collective mechanism" for the Afghan peace efforts.

Moscow is also pushing for hosting the stalled intra-Afghan dialogue. The talks that began in Doha in September made slow progress because of differences between the two sides. The situation became further uncertain after the new US administration decided to review the February 29, 2020 deal.

Against this backdrop, Russia is making efforts to seek resumption of intra-Afghan talks and also broader regional consensus.