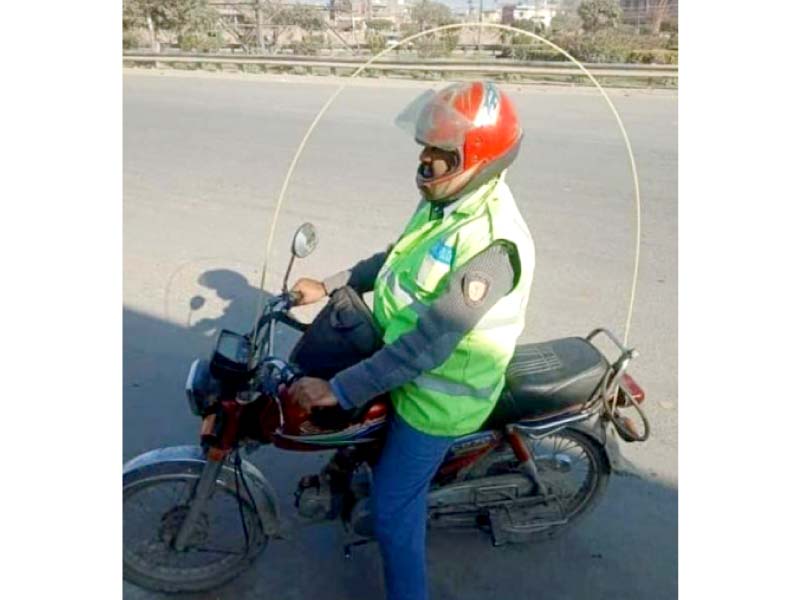 A traffic police official on his bike with a safety cable attached to prevent kite strings from getting entangled around his neck. PHOTO: EXPRESS
RAWALPINDI:

To keep motorcyclists safe due to the deadly sport of kite flying in Rawalpindi, the City Traffic Police (CTP) on Tuesday issued an advisory to install a safety cable on their two-wheelers which will prevent the kite string from getting entangled in their necks.

A flexible antenna on the front mudguard or handle is all that is needed to prevent the lethal kite string from getting to the neck.

There have been a number of fatalities in the past due to metallic and glass-laced string getting caught around the necks of bikers and slitting their throats.

On Monday, a citizen almost lost his right eye, another got his throat slashed and one was lucky to suffer a deep gash on the right arm by low hanging kite strings.

Three motorcyclists were injured when they got entangled in the string of a kite in the Dheri Hasanabad area in the precincts of the Civil Lines police station.

Rescue 1122 said that the string injured the right eye of Tufail, slit the throat of Tahir Khan and left a deep cut on the right arm of Muhamamd Yousuf.

To avoid kite strings, CTP came up with the novel idea to install safety cables on the motorcycles while travelling. The kite string will slip away instead of hurting the biker.

Rawalpindi Chief Traffic Officer (CTO) Rai Mazhar Iqbal directed all traffic wardens and motorcyclists to ensure the use of safety cables to avoid getting hurt from the kite string.

He appealed to the parents to stop their children from flying kites. Citizens have given a mixed reaction to the idea of installing safety cable on motorbikes. A number of people interviewed by The Express Tribune in the city area where Basant frenzy is at peak said, police and administration have failed to control kite flying.

He added that they would have to install safety rods to remain protected from the deadly strings as the lives of their children were at stake.

A policeman was beaten up for telling a boy not to pull in kite string over the street as it could get entangled in the neck of some biker or cyclist.

Police Special Branch official was beaten by eight people for stopping a 12-year old from reeling in kite string in the precincts of New Town police station on Tuesday.

Sohail Imran of Special Branch told the police that he was on duty in the New Town Circle detecting kite fliers. Imran said they saw some people flying kites on the roof of a car showroom in Rehmanabad.

A 12-year old boy was reeling in the string of a kite that had been cut off during the aerial duel called paicha, which could be dangerous for road users. However, the minor started shouting at the policeman, on which Khizer Abbasi reached there with eight unidentified men. “The suspects attacked me with punches and kicks, tore my shirt, and broke my official walkie-talkie,” Imran stated in the complaint.

Police have registered a case and started the investigation.