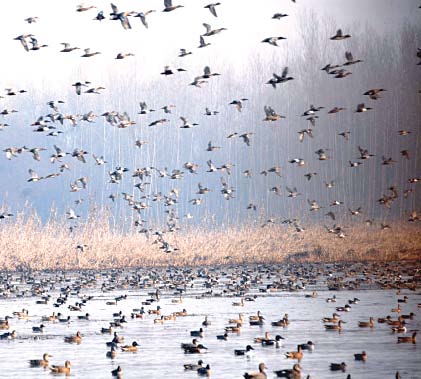 Over 7,000 birds were found hidden under caned baskets atop the roof of a passenger bus travelling to the metropolis from Larkana, said officials of the Sindh Wildlife Department on Thursday.

The birds were taken into custody and then released into the wild in a span of few hours.

A passenger coach, named Al-Riaz Coach, was intercepted by a SWD raid party acting on a tip-off near the Punjab Bus Stand in Sohrab Goth area.

Upon finding dozens of caned baskets on the vehicle’s roof and thousands of wild birds, common sparrows, mynas and nightingales - bulbul in the common parlance - the SWD teams questioned the passengers and the coach driver. But no one came forth to claim ownership of the birds.

“We arrested the bus conductor and seized the property [birds],” said Inspector Aijaz Noondani, speaking to The Express Tribune.

Subsequently, the SWD teams lodged an FOR against unidentified persons and released the conductor after a few hours and a penalty of Rs20,000.

“The bus owner has signed an affidavit,” said Noondani, adding that he assured the SWD that he would not be transporting birds or animals in the future.

The raid was conducted on a tip-off. “We were already in search of such activity for the last few weeks,” said SWD Chief Conservator Javed Ahmed Maher, elaborating on the matter.

According to Maher, the initial inquiry suggests that the birds were captured in Dadu district. They were loaded onto the coach in Mehar - a small town in Dadu, he said.

The SWD teams later released over 7,000 of the seized birds into the wild on the outskirts of the city a few hours later amid fears that the birds could have died due to suffocation.

Commenting on the matter, a wildlife official told The Express Tribune that the birds, especially sparrows, were to be sold to persons who butcher them for their meat.

“We have just come to know that some people eat sparrows,” said the official.

Similarly, the birds freed after the raid included some smaller ones that can typically be found with hawkers at various spots in the port city. They are sold at prices ranging from Rs20 to Rs50.

“At least 80 per cent [of] such trade has been reduced,” claimed Noondani. He stated that selling such tiny birds was a routine practice a couple of years ago. “Selling and trapping wild birds is completely banned,” he added.

Despite the ban on trappings, poachers, mostly in Dadu district, have been involved in the trade of birds.

In a similar incident last year, the SWD team raided a train near the Radhan Station in Dadu district and recovered over 12,000 wild birds.

“Some local officials seem involved in the trade,” an official of the SWD said on the condition of anonymity.

“That’s the reason the trade still continues,” he added.

Noondani said that his teams were continuously monitoring and conducting raids against such trade.

“The trappers have recently adopted a new strategy and use passenger coaches who then supply them to shopkeepers,” he said. “[But] this trade will not continue for more time.”