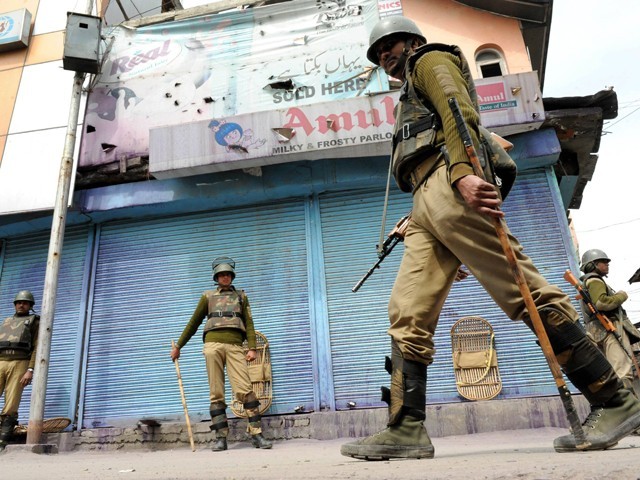 Rights groups in Kashmir say toll could be close to 100,000 from revolt which began in late 1989. PHOTO: AFP/FILE

NEW DEHLI: Nearly 40,000 people have been killed in violence that has erupted over Indian-held Kashmir more than two decades ago, the national parliament was told on Wednesday.

“As per reports, 13,226 civilians and 5,369 security force personnel have been killed in terrorist violence in Jammu and Kashmir during the period from year 1990 to April 2011,” the minister told parliament.

The figure is lower than the official police count in Indian Kashmir of more than 47,000 dead.

Some rights groups in Kashmir say the toll could be close to 100,000 from the revolt which began in late 1989.

Violence has sharply declined in the Himalayan region since India and Pakistan started a peace process in 2004.

The statement in parliament came after three policemen and an army officer were arrested in Kashmir following a probe into the death of a man in custody and an allegedly faked gunbattle last month.

Kashmir, a picturesque region in the Himalayan foothills, has been a flashpoint between India and Pakistan since partition of the subcontinent in 1947 at independence from Britain.

The nuclear-armed neighbours have fought two of their three wars over control of Kashmir.