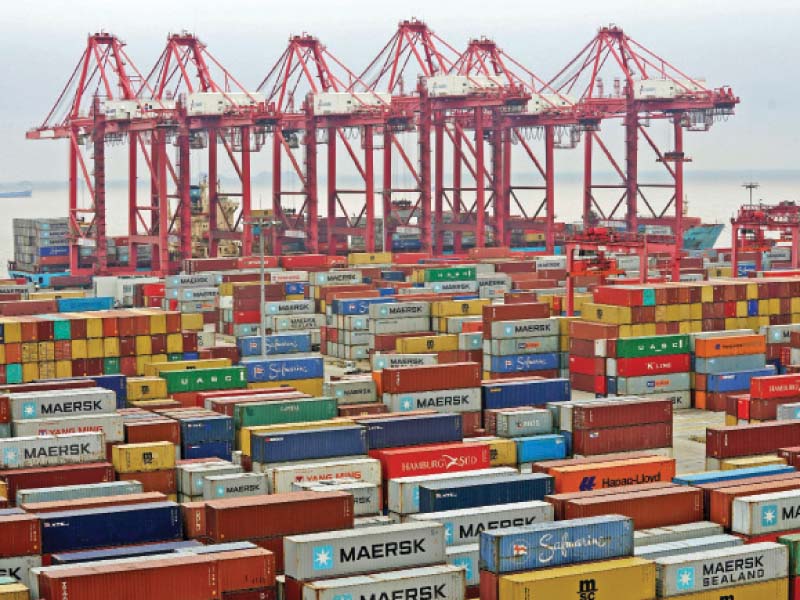 Updated FTA is very important as over 300 items are now enjoying duty-free access to each other’s countries including fisheries and pharmaceuticals. PHOTO: REUTERS
KARACHI:

The pace of imports by Pakistan has surged on back of gradually reviving aggregate demand for goods for local consumption and exports.

The country has continued to import food, energy, machinery, steel, cotton and cars to control inflation and help the economy grow.

The import of the above mentioned items grew by over 500% in dollar-value terms during the month of January, according to the Pakistan Bureau of Statistics (PBS).

The overall imports by Pakistan increased by 17% to $4.82 billion in January compared to $4.12 billion in the same month of the previous year.

The imports are expected to remain high, going forward, to help the economy recover from the adverse impact of the Covid-19 outbreak, as the country’s economy is largely dependent on imports.

The growth in imports should be a concern for economic managers, as they come at a high cost for the country’s foreign exchange reserves.

The continuously rising petroleum oil prices in the international markets would further add pressure on the balance of payment, as the country relies heavily on imported energy.

“The oil price has increased by 30% to a 13-month high around $60 per barrel in international markets since December 2020 to date,” Tangent Capital Advisors CEO Muzammil Aslam said while talking to The Express Tribune.

Work on creating import substitution through encouraging local production of raw materials like fertiliser for agriculture and cotton for textiles, and resolving grave issues in the agriculture economy to again become self-sufficient in food items like wheat and sugar may help the country improve its balance between international payments and receipts. Imports are a big component in the balance of payment of Pakistan.

“The growth in imports would lead to turning the balance of current account (balance of payment) into deficit for full current fiscal year 2021 from a surplus in the first half (JulyDecember) of FY21,” Aslam added.

“The deficit would, however, be sustainable (0.5-1.5% of GDP) in this fiscal year due to strong growth in receipt of workers’ remittances sent by overseas Pakistanis and gradual revival in export earnings,” he maintained.

He noted that the import of energy like crude oil and re-gasified liquefied natural gas (RLNG) has continued to grow in volumetric term to fulfil industrial, commercial and residential requirements.

However, their imports remained low value-term compared to this month last year. “It takes almost two months to reflect prevailing oil prices at world markets into our economy.

The revival in oil prices to a 13-month high at $60 per barrel at present is going to increase the energy import bill of the country, going forward,” he said.

Import of food items like wheat and sugar may drop in the times ahead following the start of local production of the two commodities.

“The government had allowed import of the food commodities to overcome supply gaps and stabilise wheat-flour and sugar prices…and to bring down inflation in the country,” Aslam stated. He further added that import of food items was a short-term phenomenon.

They should reduce going forward since the production of new stock of sugar is in full swing these days. Besides, the country is expected to have a bumper crop of wheat this year.

The new stock of the grain will be available in the market from the end of March to the beginning of April.

“The government may continue to import food items for price stabilisation purpose. However, the quantity would not be as high as it was in recent months,” he elaborated.

Meanwhile, the import of machinery is likely to increase going forward, since a significant number of businesses are set to import machinery for expansion in their respective product lines and/or setting up new projects under the concessionary loan Temporary Economic Refinance Facility (TERF), he said. The TERF scheme would expire on March 31, 2021.

The businesses, which would get financing approved under the scheme, could, however, import the machinery beyond March.

The import of fertiliser should also drop since the price of the chemical has significantly increased in international markets. The country can meet local demand for fertilisers.

Availability of raw material (natural gas) to produces would help reduce their imports. The import of cotton and yarn may also remain high to meet the demand of textile exports.

The government should pay attention toward increasing local production of cotton by addressing farmers’ grave issues including availability of quality seeds.

The import of cars and accessories may drop going forwards, as they are growing on the back of demand coming from investors like middlemen.

“The own-money on cars has shot up by 7-15% due to partially artificial demand. The investment bubble in the car industry may burst anytime soon,” the analyst added.

Similarly, the import of steel may remain high due to availability of construction package and the government’s resolve to provide affordable houses to masses, he said. The imports have grown 7% to $29.27 billion cumulatively in the first seven months (Jul-Jan) of the current fiscal year compared to $27.31 billion in the same period of the last year.

To recall, the State Bank of Pakistan (SBP) left the benchmark interest rate unchanged at 7% in the last eight months to let the economy expand in the current fiscal year compared to a contraction in the previous fiscal year amid Covid-19.