25th seed won 1-6, 6-3, 6-2 on Rod Laver Arena against the Australian and will now face Jennifer Brady in the semis 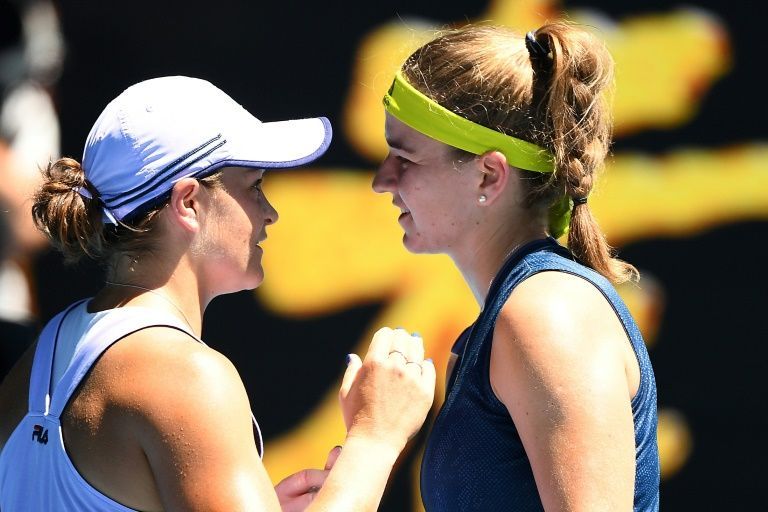 Karolina Muchova said she was living a dream Thursday after staging a stunning comeback to upset Ashleigh Barty and storm into the Australian Open semi-finals, rallying from a set down.

The Czech 25th seed looked on her way out after Barty raced through the opening set, but after a medical timeout Muchova returned a different player to win 1-6, 6-3, 6-2 on Rod Laver Arena as the Australian crumbled.

She will face Jennifer Brady for a place in the final after she American beat Jessica Pegula in three sets.

"I think it's a goal you're setting up when you're playing tennis. For me, at least, it's the majors, the Grand Slams, to go far," said Muchova, whose best previous Grand Slam result was the Wimbledon quarter-finals in 2019.

"For me to be in semi-finals, it's like a dream and I'm really happy for that."

The tide turned after the medical timeout, with Barty losing momentum.

Muchova, who is unbeaten this season, said she felt dizzy and needed a break.

"I think it was bit of the heat. Yeah, it got to me. I was feeling kind of dizzy, like really, really lost and almost fainting. So I just asked for help," she said.

"Definitely they cooled me down with the ice. I was a bit in a shadow. Doctor checked my pressure, my temperature and everything."

Her come-from-behind win ended top seed Barty's hopes of becoming the first home winner at the Australian Open in 43 years after Chris O'Neil in 1978.

Barty, the 2019 French Open champion, had made a flying start to her year, winning the warm-up Yarra Valley Classic, and had not lost a set before meeting Muchova.

"Tough one today, without a doubt," said the Australian. "I would have loved to have done a little bit better. Not my day today."

Muchova had also not dropped a set in the tournament, but that changed against Barty, who worked break points on the Czech's opening serve and converted the second with a forehand winner.

She broke again for a 5-0 lead and sealed the set in 24 minutes, with Muchova winning only 11 points, hitting just one winner against 13 unforced errors.

There was no let-up from Barty early in the second with another immediate break then a service hold to love with Muchova spraying the ball everywhere.

The 24-year-old Muchova called the trainer at 1-2 and he appeared to check her pulse and temperature before a medical timeout was taken.

When she returned, it was a different match as Muchova broke back straight away.

The Czech was far more competitive and earned another break for 5-3 then took the set as the error count mounted from a rattled-looking Barty.

Barty was broken in the first game of the third set as Muchova kept the pressure up and as the Australian's confidence drained away, she missed easy shots as Muchova surged to a famous victory. Barty itching to get started at Australian Open Champion Kenin out, top-ranked Barty through at Australian Open