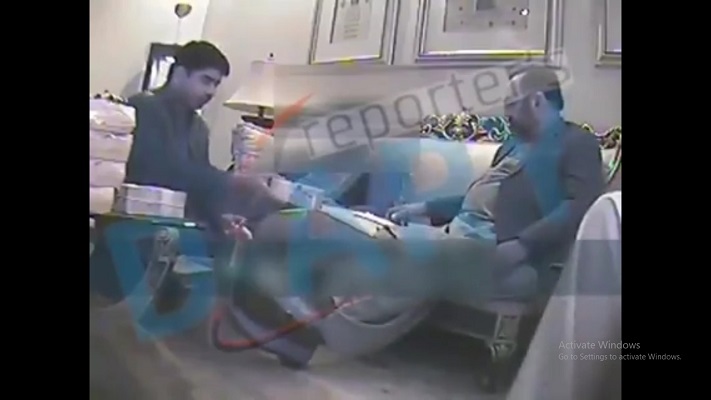 PM Imran has directed the committee to submit a comprehensive report about the incident within a month. PHOTO: EXPRESS

The video showed a man handing over large sums of money, reportedly Rs20 million, to various K-P Assembly lawmakers from the ruling PTI as well as some other parties.

In the video clip, made through a hidden camera, K-P incumbent Minister for Law Sultan Muhammad Khan and another person Sardar Idrees could be seen counting the money and signing an undertaking.

Former members provincial assembly (MPAs) from the PTI Meraj Hamyoon and Dena Khan, former PPP MPA Muhammad Ali Bacha and others could also be seen receiving cash for supporting the candidates of another party in violation of their party lines.

In a tweet from his official handle, PM’s aide on political communication Shehbaz Gill said Imran Khan directed the chief minister to remove the minister from his post, hold an inquiry into the matter and submit a report at the earliest.

In a follow-up tweet, Gill said the difference is clear between PM Imran and his political opponents.

“[PM] Imran Khan expelled 20 members from the party who were selling their votes [ahead of the 2018 Senate elections]. And after the video came out today, the law minister has also been asked to resign.”

“[However] the PML-N honoured its member Rana Mashood even more when his scandalous video came to the fore. This is the difference between Imran Khan and these thieves,” he added.

Minutes later, K-P Chief Minister Mahmood Khan also confirmed that he has asked the minister to hand in resignation. “Instructions have been issued for a transparent inquiry. In line with PM Imran Khan's vision, the K-P government will not compromise on transparency and accountability,” he added.

The video emerged at a time when the ruling PTI is taking a slew of measures to pave way for introducing open ballot at the upcoming Senate election with the avowed aim to end horse-trading.

The PTI government last month filed a presidential in the Supreme Court, asking the court if the upcoming Senate election should be held “under the Constitution” or “under the Election Act 2017”.

While the apex court bench has been hearing the reference, the president on Saturday also promulgated an ordinance – the Election Amendment Ordinance 2021 – that paved the way for holding the Senate election through open ballot.

The move sparked outrage with key opposition parties – particularly the PPP, the PML-N and the JUI-F – declaring that the ordinance is based on “mala fide” and has whipped up “a constitutional crisis”.

The JUI-F later also moved a civil miscellaneous application (CMA) before the same five-judge apex court bench hearing the presidential reference, requesting the court to declare the ordinance an attempt to undermine the judicial proceedings and parliament.