The air was heavy with grief in Malkani Sharif – a village at a distance of 60 kilometres from Badin city – on Tuesday. A Hindu farmer, Bhagat Sughan Ram, 56, had breathed his last. Both Hindus and Muslims in the area were saddened by the loss. The scenario was in stark contrast to what had happened in 2013.

In October that year, Bhuro Bheel, a Dalit Hindu had died in Tando Bhago, located in the same district as Malkani Sharif. His body, which was buried – in line with the customs adopted by Hindus of the region – was dug out the very next day amid rising tensions between Muslims and Hindus. The body couldn't be buried again for at least eight hours.

Not too far away from Tando Bhago, Bhagat's death in Malkani Sharif, however, led to a surprising display of harmony, as his Muslim landlord, Waris Laghari, expressed the wish to perform the deceased's last rites himself.

The entire village, including the Bhagat's grief-stricken family, was taken by surprise at the unusual request. And then, there was an apprehension as well.

“Only the family members [of the deceased] perform last rites. That has been the tradition,” Bhagat's brother-in-law, Ram Kolhi, explained to The Express Tribune.

He then added that the family, in this case, however, did not object to Laghari's wish.

“Laghari was close to my brother-in-law and treated him as more of a friend,” he said. “And so, no one objected.”

Resultantly, Laghari himself laid his friend, the farmer who had worked on his lands, to rest in the village's graveyard for Hindus on Tuesday.

“The villagers have been appreciating Laghari for the gesture,” said Kolhi, adding that the act had even gained the attention of activists in the village.

According to Kolhi, it is a custom among the Hindus of lower castes to bury the deceased and not cremate the bodies.

“And there is no harm in it,” commented Ram, dubbing it the “social impact of living with Muslims.”

It has been adopted to such an extent that in some areas of Badin, Hindus and Muslims bury the dead in the same graveyard.

According to historian and anthropologist Abu Bakar Shaikh, who has been working on the historical sites of lower Sindh, explained that Hindus from the lower castes in the area usually buried the deceased and those from the upper caste performed last rites in a different manner. 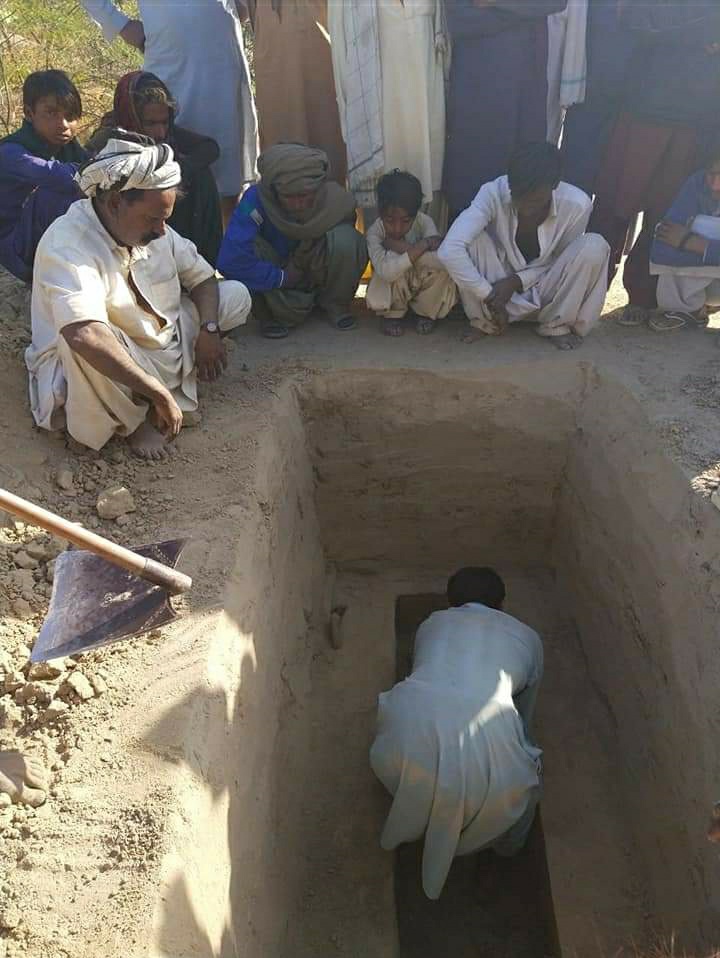 “The majority of people from both the communities, [Muslim and Hindu], for the most part, have strong ties. They attend each other's ceremonies and rituals and come together at events such as weddings and funerals,” he said.

However, to Shaikh, Laghari's gesture, albeit a “good sign”, is “surprising.”

“Honestly, it is new for me,” he said, and then added, “Not just for me but for those who have been a witness to rising extremism in the region,” said Shaikh.

For Laghari, the act meant way more than a gesture of harmony, unity and brotherhood.

“It was his [Bhagat's] last wish,” he told The Express Tribune.

According to Kolhi, his brother-in-law, on his deathbed, had said to Laghari that he might not be able to participate in his funeral for the obvious reason that he was a Muslim. “But Laghari promised him that he would not just attend the funeral, but would do ‘something unusual,'” said Kolhi.

And living up to his word, Laghari performed the last rites himself.

“But what's so unusual about it?” asked Laghari, saying that he didn't find anything surprising about him digging Bhagat's grave and laying him to rest.

He added, “We are the same, we are all humans.”