Pakistan among ten countries with most internet users in Asia

PM Task Force on IT member Parvez Iftikhar pointed out that Covid-19 had shown that internet of high speed and large ca-pacity was a must to keep wheels of economy, healthcare, education and other sectors moving. PHOTO: FILE

Pakistan has been listed amongst the top ten countries with the biggest share of internet users in Asia 2020 according to a report published by Statista. 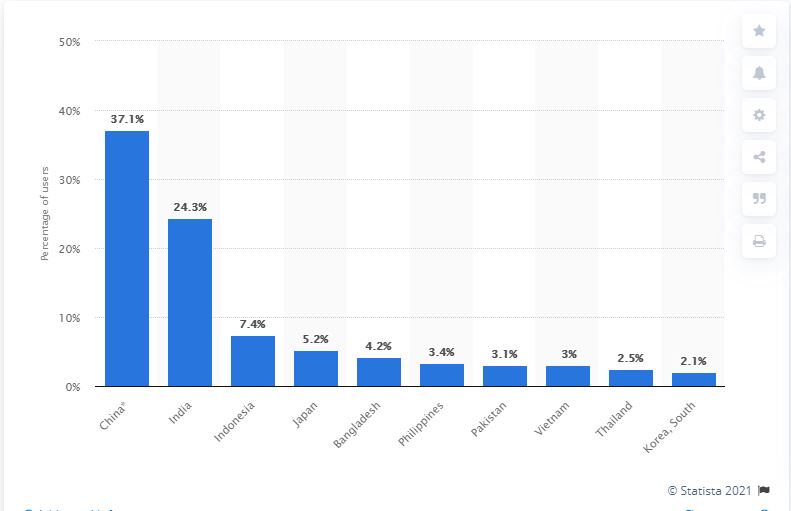 The geographic analysis of the audience showed that China accounted for 37.1 per cent of internet users in Asia as of May 2020, followed by India with 24.3 per cent. Pakistan came in at sixth position on the chart with 3.1 per cent internet users.

The spike can be attributed to increased online activities by educational institutions and businesses and, ‘work from home’ policy adopted by individuals and organisations, according to a Pakistan Telecommunication Authority (PTA) press release.

"This is the highest surge we have seen ever. Facebook, YouTube, WhatsApp, Instagram, TikTok, and Netflix are the most popular social media apps being used during these days, and most of the trends on social media apps are related to Covid-19 developments and initiatives taken by the government in this regard," PTA spokesperson Khurram Mehran said.

Why half the world is not online? Bringing high-speed internet to Pakistan by 2023

Pakistan has also kick-started its journey to make the most advanced 5G internet commercially available to consumers in 2022-23, which would accelerate the download speed 10 times to one gigabit per second (Gbps) and widen economic activities significantly in the country.

However, despite the growing number of internet users and demand for high-speed internet, there is still a huge gap between the urban and rural areas in Pakistan and their access to the internet due to which there is low accessibility to work opportunities and global outreach in these areas; resulting in slow socio-economic development.

Women's access to the internet also remains a great challenge in the country according to a new study conducted by Media Matters for Democracy (MMfD) titled “Women Disconnected: Feminist Case Studies on the Gender Digital Divide Amidst Covid-19” which reveals that six in ten women in Pakistan face restrictions from their families when using the internet.

6 in 10 women face restrictions when accessing internet in Pakistan

Nine killed, 16 injured in clash during jirga in Upper Dir

Mahmood for right to vote for overseas Kashmiris

EVM a move to steal next polls, alleges opp