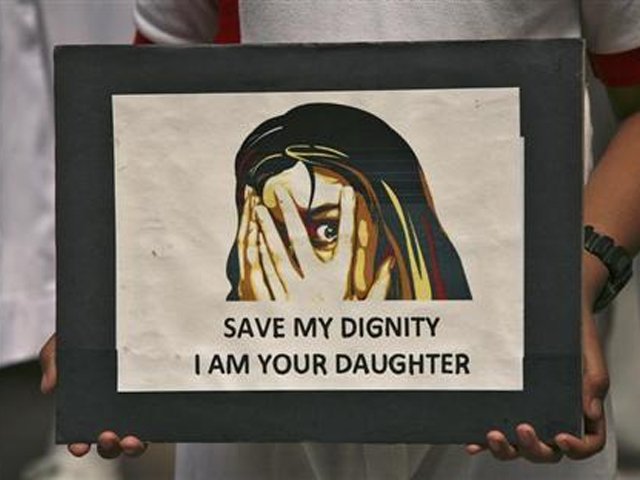 A woman was allegedly sexually assaulted at a clinic in Jaranwala on Saturday.

Police registered a case and started searching for the accused. In the case filed by a resident of Hussain Nagar, the complainant stated that she had a severe stomach ache and she went to the clinic of Dispenser Dr Mian Mohammad Afzal in Bashir Colony.

The victim was accompanied by her cousin Mohammad Irfan and mother Tanveer Bibi.

The dispenser asked the victim’s mother to sit in the clinic while her cousin was sent to the nearby medical store to buy an injection.

When the victim’s cousin was late, the dispenser sent her mother out to look for him. Taking advantage of the situation, the accused dispenser closed the gate of the clinic and raped her, the complainant alleged.

After the victim made noise, the accused fled the scene.

Jaranwala city police registered a case under Section376 of PPC and started searching for the accused.

Meanwhile, an eight-year-old boy was allegedly gang raped by two men including the accused Aftab alias Tobi who lured the victim in Hussain Nagar, Jaranwala.

Incidents of sexual violence against women and minors are rampant across the province.

On January 18, a woman and a minor girl were allegedly sexually assaulted in Dijkot.

The minor girl left her home in the afternoon to buy vegetables.

The motorcyclist lured her out of the way, abducted her and took her to an unknown location where he sexually assaulted her.

He later threw the unconscious girl near Lasani Bridge in Sargodha Road police station and fled.

Passersby spotted the unconscious and blood soaked girl and reported her to Rescue 15 who shifted her to Allied Hospital Faisalabad.

Meanwhile, the relatives of the victim searched for the girl on their own and after she did not return home, informed Razaabad police station about the situation.

When the relatives of the victim rushed to the hospital, they came to know that the sexually abused girl was their daughter.

Separately, a woman was assaulted in Bhuana bazaar. The victim went for shopping with her friend. The two women went to a shoe shop. Due to heavy crowd inside the shop, the owner Sohail asked them to go and sit in a room on the upper floor of the shop, where the victim went and was seated.

Meanwhile, the shop owner Sohail and his employee Naeem came inside the room and allegedly raped her.

On January 16, two minor boys including a grade three student were allegedly sexually assaulted in Dijkot.

The six-year-old boy, the son of Boota and nephew of Hanifa Bibi, residents of Chak No 66GB, Jhang Road, was lured by Abbas, Haroon, Maroof and four others. The suspects took the minor boy near a graveyard where they raped him.

Reportedly, the boy was severely injured in the assault.

Separately, a nine-year-old boy, the nephew of Munir Ahmed and a resident of village 30GB on Nadwala Road, was allegedly sexually assaulted by Usman, son of Ali Asghar.

The suspect took the third grade student to his house under the pretext of giving charity money where he raped the minor boy.

On January 1, a nine-year-old boy was sexually assaulted by two men in Dijkot.