Literati pay tribute to poet of resistance and romance 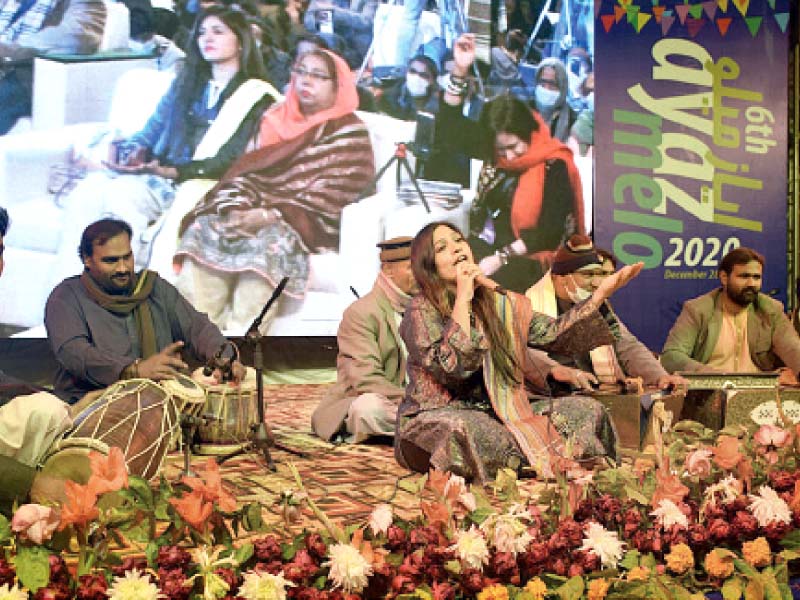 Folk singer Reshma Parveen enthralled the audience with her songs on both nights of the sixth edition of the Ayaz Melo. PHO-TO: APP
HYDERABAD:

The sixth edition of the two-day annual Ayaz Melo, dedicated to the peerless 20th century Sindhi poet late Shaikh Ayaz, concluded on Tuesday with speakers showering accolades on the poet of resistance and romance. The usually week-long event, organised by the team of Khanabadosh Writers’ Cafe in the splendid lawn of the Sindh Museum in Hyderabad, was restricted to just two days due to the Covid-19 pandemic. It was inaugurated by Sindh Culture Minister Syed Sardar Ali Shah on Monday.

Expressing his views in the first session titled ‘Ayaz and modern day challenges to Sindhi language’, Indian writer Hero Thakur said that Sindh still embodies a rural society. “But despite belonging to this village-like province Ayaz’s poetry is universal in nature,” acknowledged Thakur, who was speaking from India through video link.

Thakur believed that if a poet well versed in English language had translated Ayaz’s work in English, the late poet would have won global recognition. He emphasised on the need of digitalising his prose and poetry.

Asha Chand, who also participated through video link from Dubai, recalled that once during Ayaz’s visit to India, he recited his poetry to her when they were visiting the seaside. She shared her happiness on the Indian government’s order about educating children up to their primary level in the mother tongue, expressing hope that their posterity will learn Sindhi in a better way.

Dr Fehmida Hussain, Dr Sher Maharani and Dr Adal Soomro were also among the panelists in the session moderated by Taj Joyo. During the second session, Sach wado dohari aahe [Truth is the biggest victim], Journalist Muhammad Hanif bemoaned that Pakistani media has come under greater censorship. “My books are being removed from the stalls.” He blamed the state for controlling minds of the people, which needs to be resisted.

Meanwhile, novelist Syed Kashif Raza said that the English media has greater liberty to speak the truth. He regretted that some media houses lack the background of journalism, adding that minting money seems to have become the prime objective of the media.

“The commercial companies are opening the TV channels.”

Columnist Aijaz Mangi said the literature should not be restricted by the censorship.

Speaking at the inaugural session on Monday, provincial minister Shah said that Ayaz was a miracle which happened to Sindh, equating his importance with Moenjodaro and Shah Abdul Latif Bhitai. He credited the late poet for establishing an era through his poetry. “We find ingrained in his poetry the love for his motherland and its vast cultural geography.”

For him, Ayaz was moved by the subcontinent’s division, witnessing the migration of native Hindus from Shikarpur and Hyderabad, where he lived. “He was also a witness to the imposition of the One Unit system and the snatching of Karachi.”

Shah point towards the missing feature of criticism, in the prevailing literature, saying the absence of critics has been stalling growth. “Indeed, we no longer have the culture of paying heed to critical views.”

The minister apprised that his department is compiling the speeches made in the Sindh Assembly since 1937, a year after the province was separated from the Bombay presidency.

Meanwhile, Baloch poet and writer Munir Ahmed Badini said Ayaz’s poetry reflected the pain of the people. “If poetic creativity isn’t connected with motherland, the very roots remain shallow.” He cautioned that if present day writers and poets failed to develop the language, the works of Bhitai and Ayaz will be consigned to oblivion. However, Badini generally felt optimistic about the prospects of Sindhi language due to the language’s ever growing use.

Poet Iftikhar Arif, who also participated through video link, noted that Himayat Ali Shair, Asif Farrukhi, Fehmida Riaz and some other contemporaries introduced Ayaz in other languages. “His poetry contains rich diversity which is often not found in others.” He considered Ayaz a great poet of the modern era after Bhitai.

Another Indian scholar, Vimmi Sadarangani, observed that Sindh and the river Indus are preponderantly present in Ayaz`s poetry. For her, Ayaz was a poet of ‘Sindh and Hind’. “It is sad that writers and poets have to bear the brunt of cross border relations.”