Iranian officials pray over the coffin of slain top nuclear scientist Mohsen Fakhrizadeh during his funeral ceremony in the capital Tehran, in a picture supplied by the conutry's defence ministry Photo: IRANIAN DEFENCE MINISTRY
TEHRAN:

Iran said that Israel and an exiled opposition group used new and "complex" methods to assassinate its leading nuclear scientist, as it buried him Monday in a funeral befitting a top "martyr".

As it laid Mohsen Fakhrizadeh -- seen by Israel as the "father" of Iran's nuclear weapons programme -- to rest, the Islamic republic also vowed to redouble his work.

Fakhrizadeh died Friday after his car and bodyguards were targeted in a bomb and gun attack on a major road outside the capital, heightening tensions once more between Tehran and its foes. 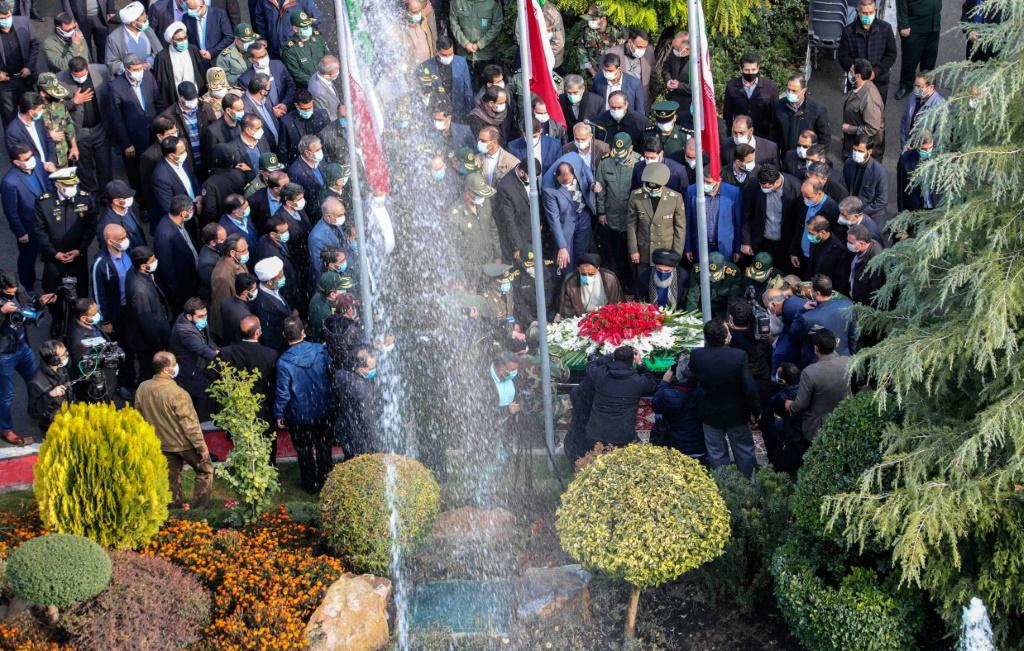 Iranian officials pray over the coffin of top nuclear scientist Mohsen Fakhrizadeh during his funeral in Tehran on Monday, in this picture provided by the country's defence ministry Photo: IRANIAN DEFENCE MINISTRY

Iran's top security official, Rear-Admiral Ali Shamkhani of the Supreme National Security Council, said the "operation was very complex, using electronic equipment and no one was present at the scene".

The People's Mujahedeen of Iran (MEK) were "certainly" involved, along with "the Zionist regime and the Mossad", he said in video interviews, referring to the Israeli government and its spy agency.

With few details emerging of the attack itself, the scientist's son said his mother was also in the targeted car but survived the attack.

Without citing sources, Fars news agency said the attack had been carried out with the help of "a remote-controlled automatic machinegun" mounted on a pickup truck.

State-run Press TV said "made in Israel" weapons were found at the scene. 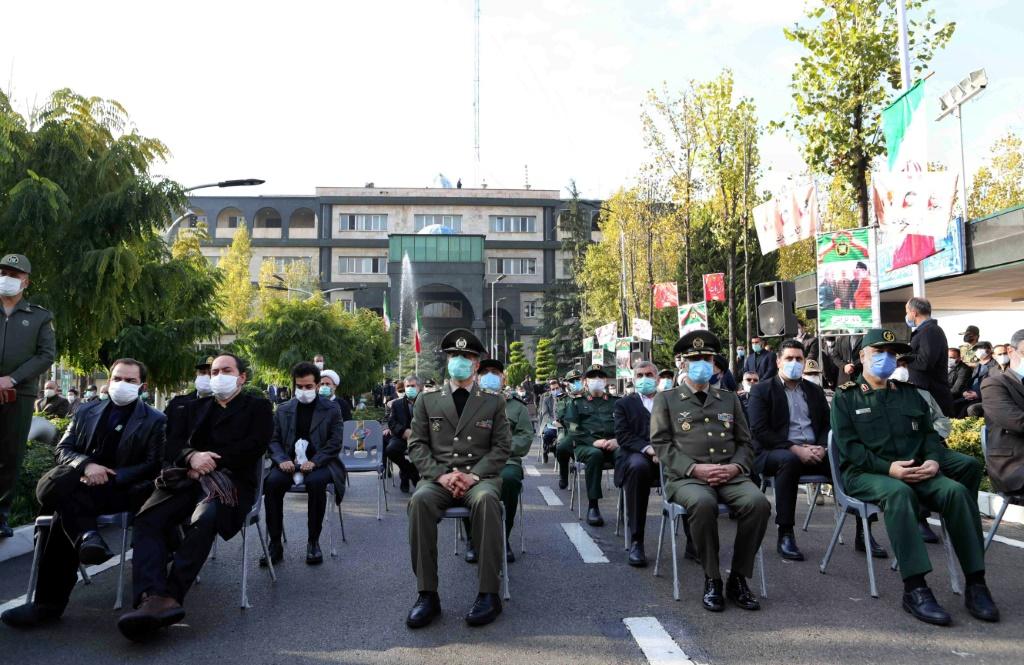 Iran's President Hassan Rouhani had on Saturday accused Israel of acting as a "mercenary" for the United States by carrying out the assassination.

As the funeral got underway, a religious singer praised Fakhrizadeh and alluded to the martyrdom of Imam Hossein, the revered 7th century holy figure from whom Shiite Muslims draw inspiration.

"If our enemies had not committed this heinous crime and spilled our dear martyr's blood, he might have remained unknown," Hatami said in a speech. 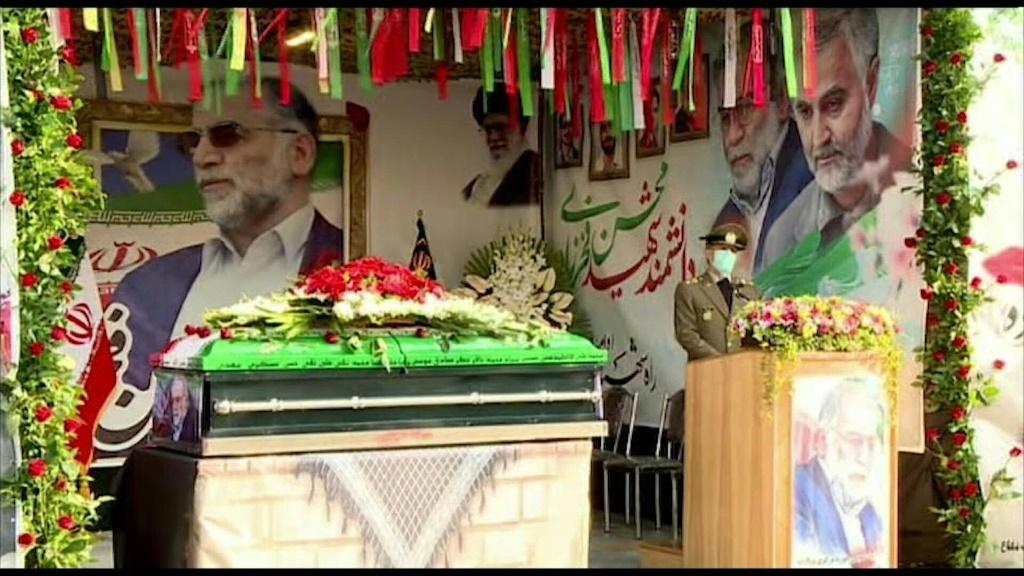 Mohsen Fakhrizadeh's coffin, draped in the Iranian flag and with a photo of the assassinated nuclear scientist Photo: IRANIAN DEFENCE MINISTRY

"But today, he who was only an idol for... his students and colleagues, is introduced to the whole world," he added.

Hatami had said after the scientist's death that Fakhrizadeh was one of his deputies and headed the ministry's Defence Research and Innovation Organization, focusing on the field of "nuclear defence".

In his speech, he said the government had decided to double the organisation's budget to continue Fakhrizadeh's path "vigorously".

A large display showed a picture of Fakhrizadeh next to Iran's supreme leader Ayatollah Ali Khamenei, as well as former top general Qasem Soleimani, who was killed in a January drone strike by the US in Baghdad.

The assassination has led to demands for a strong response from Iran's leadership, even as the hawkish presidency of Donald Trump draws to a close.

Iran's President Rouhani has accused Israel of acting as a US "mercenary", blaming it for the killing of Fakhrizadeh, and supreme leader Khamenei has called for the perpetrators to be punished. 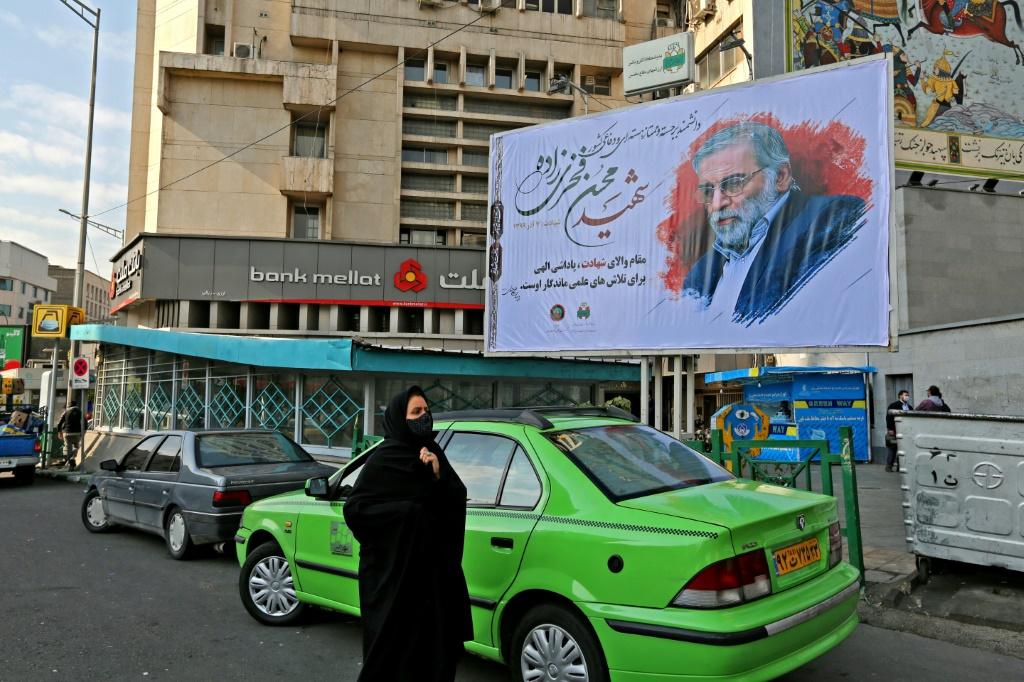 Fakhrizadeh, shown here on a billboard in the capital, did not have a high profile before he was killed, but is now being celebrated as a top "martyr" by the Islamic republic Photo: AFP

Parliament on Sunday demanded a halt to international inspections of nuclear sites in the country, a step that could prove a fatal blow to the nuclear deal the Islamic republic agreed with world powers in 2015.

The UN nuclear agency's chief on Monday warned against any such move.

It remains "essential to give the world the necessary and credible assurances that there is no deviation from the nuclear program to military uses," International Atomic Energy Agency head Rafael Grossi told AFP.

"We understand the distress but at the same time it is clear that no-one, starting with Iran, would have anything to win from a decrease, limitation or interruption of the work we do together with them," he said.

Trump withdrew from the Iran nuclear deal in 2018 and began reimposing crippling sanctions, but US President-elect Joe Biden has promised a return to diplomacy.

Rouhani has emphasised Iran will seek its revenge for the assassination in "due time" and not be rushed into a "trap".

The US slapped sanctions on Fakhrizadeh in 2008 for "activities and transactions that contributed to the development of Iran's nuclear programme".

Around a year after the US withdrew from the nuclear deal, Iran began gradually abandoning most of its key commitments under the agreement.

Monday's funeral was not open to the public in order to maintain health protocols over the novel coronavirus pandemic, the defence ministry said.

Some "say we can make the enemy not have enmity (towards us) through talking. That is not possible," said the supreme leader's representative at the defence ministry, Ziaodin Aghajanpour, standing next to Fakhrizadeh's coffin.

"Why? Because the enemies are against the basis of the Islamic republic system," he added.

As part of the procession before the funeral, Fakhrizadeh's remains were taken on Saturday and Sunday to Shiite shrines in the northeastern city of Mashhad and Qom in central Iran, as well as the shrine of the founder of the Islamic republic, Ruhollah Khomeini in Tehran.