Smuggling across Pakistan’s borders with Iran and Afghanistan continues to plague the country’s economy.

Although efforts of the present government have prompted a slight decline in illegal trade, the issue by and large still persists and continues to eat into the country’s revenue, a joint study by Pakistani officials and foreign experts has pointed out.

As things stand, smuggled goods meet a significant chunk of demand generated in Pakistani markets, the report compiled by a team of Harvard economists and senior commerce ministry officials revealed.

The top dozen commodities smuggled into the country generate as much as $3.3 billion a year, the study underscored. More alarmingly, law enforcement and regulatory bodies in the country are only able to seize a meagre 5% of the goods smuggled into Pakistan.

According to the report, from 2014 to 2018, the volume of goods smuggled into Pakistan increased nearly threefold. In terms of value as a share of Pakistan’s gross domestic product (GDP), smuggling went up from 3.88% to 11.25% in that period.

Recent initiatives by the government have only managed to achieve a slight decline, the report added.

According to the report, smuggled goods have penetrated several sectors of Pakistan’s economy. These range from cellphones and fuel to daily-use items like toiletries and tea.

A staggering 74% of cellphones sold in Pakistan were smuggled into the country, the report pointed out. When it came to vehicles, 53% of diesel, 43% of engine oil, 40% of tyres and 16% of auto parts sold in the country were smuggled.

The report revealed 53% of toiletries sold in Pakistan were smuggled, as was 23% of tea and 20% of cigarettes. Medical drugs worth Rs44 billion were also smuggled into Pakistan.

A significant chunk of textiles - 300,000 tonnes to be precise - were also smuggled into Pakistan, the report stated. However, it was due to demand exceeding supply. 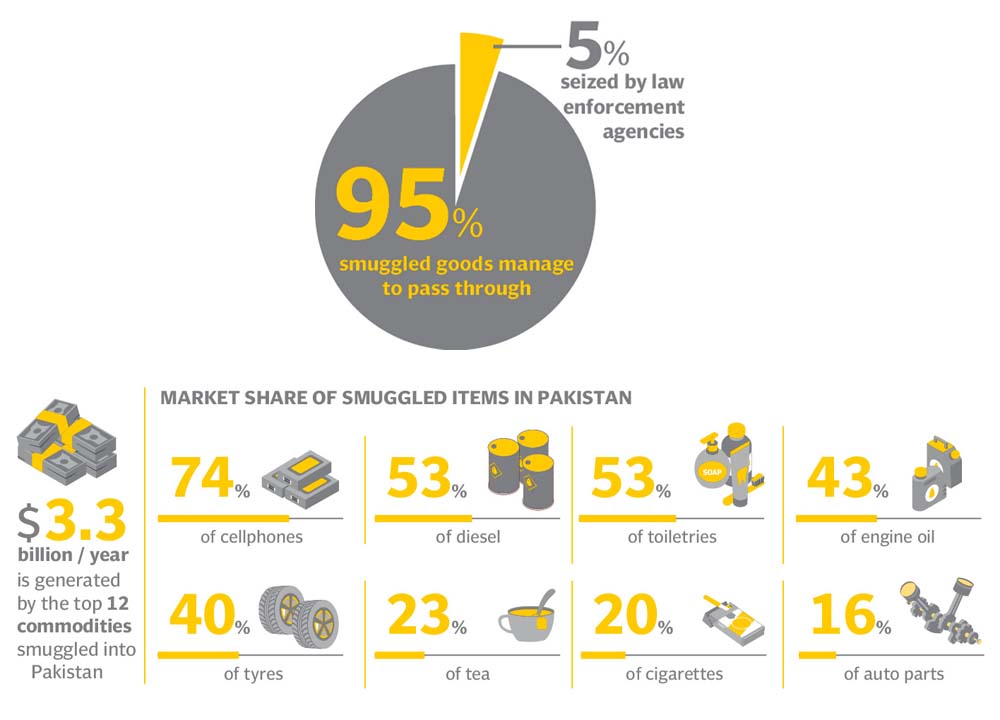 Speaking to The Express Tribune, government sources said smuggling continues unabated because the federal anti-smuggling and customs departments are suffering from a severe lack of resources, manpower and capability.

In Balochistan, for instance, the total strength of customs field staff is only 1,000 officers. This means that only one officer is available for an area of about 100 square kilometres on average.

Due to the staff shortage, senior customs officers have their hands tied when it comes to deploying inspectors believed to be corrupt, they said.

Despite strong demand, the customs department has not been designated a law enforcement agency, which seriously restricts its ability to crack down on smugglers, they added.

The chief collector also cannot make appointments and transfers, restricting the office from affecting meaningful change. In the meantime, banned militant organisations in Balochistan and Khyber-Pakhtunkhwa were assisting smuggling operations along the frontier, exacerbating the challenge to contain illegal trade.

Faced with new restrictions, smugglers appear to have changed their modus operandi. According to officials, instead of using electronic items and clothes, like they used to in the past, smugglers now transport their wares using less conspicuous tools, such as tyres and cigarettes. Even so, customs officials seized Rs40 billion worth of smuggled goods in just the first four months of current fiscal year, the report noted. Compared to the corresponding period of previous year, this haul represented a 100% increase.

Talking to The Express Tribune, experts and members of the business community said the smuggling could only be seriously contained right at the border.

They agreed that without enhanced powers, there was little customs officials could do on this issue, especially since some notable ‘influential people’ were involved in such illegal activities.

Trade experts, in their proposals presented in the study, called for a change in the legal definition of smuggling. They also proposed stricter laws, a revision of customs duty tariffs and awarding of anti-trafficking powers to customs officials. The study proposed redefining the scope and powers of all law enforcement agencies and a new enforcement system, along with negotiations with governments of Afghanistan and Iran to curb smuggling.

When contacted, Additional Commerce Secretary Dr Tariq Huda, who was part of the research project with Harvard experts, lauded Prime Minister Imran Khan’s interest in curbing smuggling. He pointed out that the premier had set up a committee for anti-smuggling efforts and had given the green light for the recruitment of 2,000 personnel in the customs department to overcome the staff shortage it faced.

“Such measures will significantly reduce the volume of smuggled goods compared to the previous financial year,” Huda said. “Even with limited resources, the customs department has seized a large volume of smuggled goods. The volume of goods seized in the first five months of the current financial year is nearly the same as the volume of goods seized during the entire previous financial year,” he pointed out. Huda added that eradicating smuggling is essential for strengthening Pakistan’s economy. “The government is also looking into how it can further empower chief collectors,” he said.