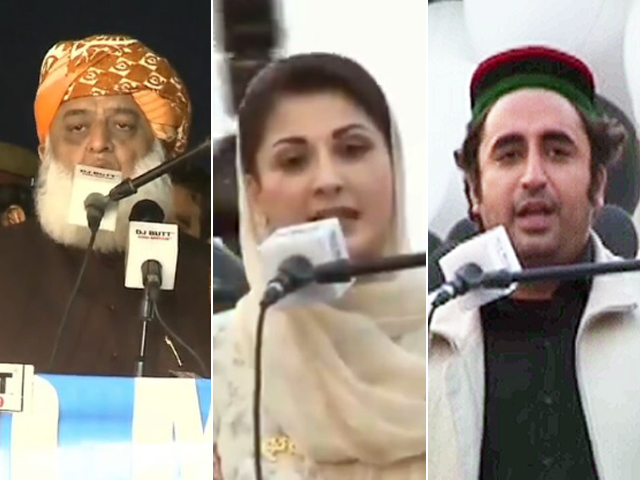 The Pakistan Democratic Movement (PDM) on Sunday maintained that the PTI-led government would be sent packing by January as the 11-party opposition alliance held its rally in Peshawar despite a ban on public gatherings due to rising Covid-19 cases.

The alliance also ruled out “retreating from the battlefield after declaring war”.

The city’s administration had refused to grant permission to the opposition parties to stage their fourth power show under the banner of the PDM citing an exponential rise in coronavirus cases.

The opposition parties were also warned by the government that cases could be registered against them if a spike in virus cases was witnessed in the province after the rally.

PML-N Vice President Maryam Nawaz, who was present on the stage and scheduled to address the rally, left the venue soon after hearing the news of her grandmother's demise.

She apologised to the crowd for being unable to deliver her address and requested political activists and supporters to pray for the departed soul and the early recovery of her ailing father, former premier Nawaz Sharif.

In a tweet, Maryam regretted the government’s attitude following the demise of her grandmother.

“No government official was humane enough to inform me of my grandmother's death. I have requested Mian Sahib [Nawaz Sharif] not to come back at all. These are tyrants and vengeful blind people from whom no kind of humanity is expected,” she wrote on her official Twitter handle.

Addressing the crowd, PPP Chairman Bilawal Bhutto Zardari claimed that January would be the PTI government's "last month in power".

“They [PTI government] will go home in January,” he said. “The time is near when you, the people, would hold this selected government and its selectors responsible for the current crises.”

The PPP chairman maintained that the government had given an NRO to the terrorists responsible for the APS Peshawar attack.

“We will not allow this government to support terrorists whose hands are red with the blood of the innocent.”

Bilawal also claimed that the government was not releasing enough funds for the development of erstwhile Federally Administered Tribal Areas (Fata), which had now merged with Khyber- Pakhtunkhwa.

Bilawal said his party had struggled for a long time for Fata's merger with K-P and his mother, former premier Benazir Bhutto, had even approached court for this purpose.

“It is because of democracy and the democratic government that the flag of Pakistan is hoisted in North Waziristan,” he added.

However, he claimed, the people of the trial areas were being kept deprived of their rights despite the merger.

“It is the responsibility of the government to compensate the people of the tribal areas for their sacrifices,” he said. “Even today, the number of missing people is increasing. There is a hole in the prevailing justice system. But I would like to salute late Peshawar High Court chief justice Waqar Seth who had upheld the law and penned down punishment against a dictator.”

The PPP chairman vowed that his party and the PDM would never abandon the people of K-P unlike the current rulers.

He said K-P was neither receiving royalties for its crude oil , nor being paid for the gas and hydel power it produced.

“They [government] are trying to take away our share under the NFC,” he added. “They have reduced at least Rs116 billion from your right. Imagine what could be done with that? Why don’t they pay royalty of your crude oil, gas? It is because they are not you representatives but are representatives of their selectors.”

Speaking on the ban on public gatherings, Bilawal said the government only warned the people about the Covid-19 pandemic whenever there was a PDM rally. “They are not even compensating the frontline workers.”

Targeting the National Accountability Bureau, the PPP chairman said the anti-graft body could not see the corruption of province’s most expensive metro project, the Peshawar BRT, and PTI’s the foreign funding case.

In his speech, JUI-F chief Maulana Fazlur Rehman said people from across K-P attending the rally in large numbers was a referendum against the PTI government.

He added that the PDM’s power shows in Peshawar, Quetta, Karachi and Gujranwala showed that the people had “rejected a government which came into power through rigged elections”.

"We have declared war and retreating from the battlefield is a grave sin.”

The Maulana, who is the president of the PDM, said the opposition respected state institutions but had every right to criticise them if they became involved in politics.

“We give you a deadline to withdraw your support for the PT government and focus on your professional responsibilities,” he added.

“Just like people in the US have rejected President Trump, people [of this country] will also reject the Pakistani Trump [Imran Khan].”

He maintained that because of the “flawed foreign policy” of the incumbent government, the country’s ties with its allies were deteriorating. “No country including the UAE, Saudi Arabia and China is ready to trust Pakistan now. Today, Saudi Arabia and the UAE are demanding that Pakistan should return their money.”

The PDM chief also claimed that the Indian government had revoked the semi-autonomous status of Indian Illegally Occupied Jammu and Kashmir (IIOJK) because PM Imran had compromised on the issue.

“Imran Khan had prayed for the success of [Indian prime minister] Narendra Modi in the elections and he sold the Kashmir cause,” he added.

Fazl said the PTI government was taking very “sensitive decisions” without taking the people into confidence.

“Nowhere in democratic countries do we see political leaders changing the geography of the country,” he said, referring to the government’s decisions of merging erstwhile Fata into K-P and announcing giving Gilgit-Baltistan the status of a provisional province.

Addressing the Peshawar rally, other leaders of opposition parties that are a part of the PDM called for fair and transparent elections to be held in the country, again terming the incumbent government as a 'selected' one.

Referring to terrorism that has long plagued the K-P province, Hoti said, "We have had enough of being branded terrorists." He said these wounds will have to be healed.

Balochistan National Party - Mengal's (BNP-M) chief Akhtar Mengal also called for respecting the people of K-P and Balochistan and stop the practice of terming them 'terrorists'.

The PDM's central leadership reached the Peshawar rally venue after being hosted on a luncheon at the Bilour House - residence of the ANP's famed Bilour family.

Having addressed previous PDM gatherings from London via video link, PML-N supremo Nawaz Sharif did not addressed the Peshawar rally, apparently due to severe kidney pain. The news was confirmed by Maryam Nawaz in response to a tweet earlier in the day.

The three-time former premier had excused himself from a PDM meeting held last week for the same reason.

Spokesperson for the PML-N's K-P chapter, Ikhtiar Wali, while denouncing the roadblocks allegedly put in place on the way to the venue earlier today, said that Prime Minister Imran Khan's government has become scared of the PDM's rallies.

Referring to the country's Covid-19 data, Prime Minister Imran Khan in a tweet on Sunday accused the opposition alliance of "callously destroying peoples' lives and livelihoods".

He said the PDM was "deliberately endangering the lives and livelihoods of people, bec if cases continue to rise at the rate we are seeing, we will be compelled to go into complete lockdown..."

Opposition is callously destroying people"s lives & livelihoods in their desperation to get an NRO. Let me make it clear: they can hold a million jalsas but will not get any NRO.

In a video statement, K-P government spokesperson Shaukat Yousafzai, taking an apparent hit at the number of pople present at the venue, said, "I congratulate the pople of Peshawar for rejecting the opposition's narrative".

He said this was not a rally, but a conspiracy against the people of Pakistan.

The opposition’s alliance was denied the permission to organise today’s rally by the city administration on Friday.

The deputy commissioner in a statement said Covid-19 positivity rate has exceeded 13 per cent in Peshawar district which is “alarmingly high”.

Any large public gathering is likely to increase the spread of deadly virus, it added.

On Saturday, November 20, Prime Minister Imran Khan and several key federal ministers also criticised the opposition parties’ alliance for allegedly playing with the lives of common people by defying a government ban on its public gathering in Peshawar amid the second wave of the coronavirus.

The prime minister accused the opposition parties of playing reckless politics with people’s safety, saying earlier the opposition had favoured a stricter lockdown but they were now defying court orders and holding a rally when Covid-19 cases were on the rise.

“The same PDM mbrs [members] who had wanted a strict lockdown and criticised me earlier now playing reckless politics with people's safety,” the premier tweeted, “they are even defying court orders & holding a jalsa when cases are rising dramatically.”

The government’s ban on public gatherings came on November 16, a day after the Gilgit-Baltistan’s elections (G-B). Announcing the ban during a press conference, PM Imran said the decision was taken keeping in view the rapid increase in Covid-19 cases in a fortnight.

Amid charged political scenario, the prime minister said that the government had suspended its rallies, which were planned earlier, in line with the National Coordination Committee (NCC) recommendations that call for ending all activities that don’t affect people’s livelihoods.

However, addressing a press conference in Peshawar, JUI-F chief Maulana Fazlur Rehman maintained that the government was using the issue of coronavirus as an excuse to stop the opposition from staging its public gatherings.

“This illegitimate government itself is a big corona," the Maulana said. “We speak about Covid-19, but we should also highlight Covid-18,” he added, referring to the PTI government. “Getting rid of this government will be major relief for the nation.”

The JUI-F chief said the PDM would stage a historic rally in Peshawar and not allow its anti-government movement to lose steam at any stage.

Several opposition leaders slammed the government for the ban’s timing, saying the threat of the virus spreading was equally significant when it [the government] was holding its own G-B electioneering rallies.

Addressing a press conference in Gilgit on Thursday, PPP chairman Bilawal said that the Sindh government was the first to announce measures to deal with the Covid-19 outbreak, and it was the prime minister who made them controversial.

"We have to send Imran Khan packing because he has failed on every front, be it Kashmir or Covid-19. The PTI government does not have the capacity to deal with these issues," he maintained.