'January to be the end of PM Imran's govt', reasserts Bilawal

Asks G-B election's independent winners to 'not trade victory', protect the rights of G-B's people instead 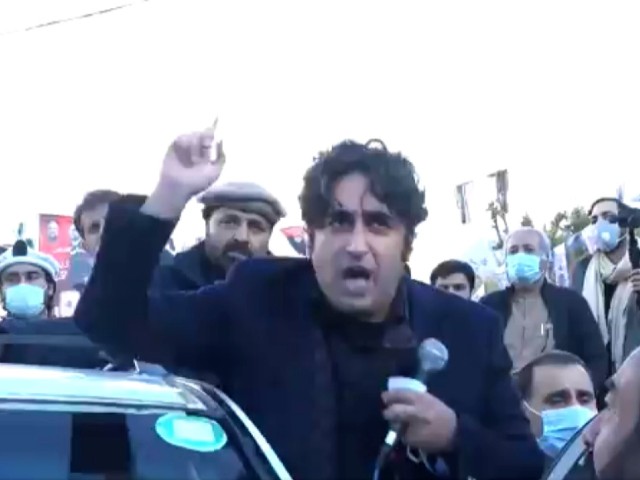 The government in Islamabad will be sent packing by January, asserted Pakistan Peoples Party (PPP) Chairman Bilawal Bhutto Zardari again while talking to journalists in Gilgit on Thursday.

He said the people of Gilgit-Baltistan (G-B) have been supporting the PPP for the last three generations, and have trusted the opposition by voting far more for their parties' candidates than for the PTI's.

Bilawal has continued to stay in G-B days days after the region went to vote for its third legislative assembly on November 15. The PPP has termed the elections to be 'rigged' as the ruling PTI was all set to form a government in the region.

At today's media talk, the PPP chairman claimed that women were not allowed to vote in the Tangir area. "The entire world got to know of it through the foreign media present in G-B," the party chairman claimed. He demanded for the "7,000 women to be given their right to vote", adding that, "The law says that these women should be allowed to vote".

Speaking of the vote recount ordered in G-B 21, he said it was the PPP's supporters who forced the Election Commission to order a recount, adding that a 'good news' is soon to follow the PPP on other seats too. Elections were also being held in GB-3, where Bilawal appealed to the people to vote for the PPP.

The PPP chairman termed the G-B election commissioner biased in favour of the federal government. "On whose instructions did he hold a press conference in Islamabad against the opposition?" Bilawal asked.

"The election commissioner not only sold the people of G-B but also its land," Bilawal said. "Reports of HRCP and FAFEN clearly show that rigging and violation of election laws happened in the G-B elections. Fafen report says that at least three incidents of rigging and irregularities were reported from every polling station," the chairman added.

The PPP head again appreciated the people of G-B for "making it difficult for the federal government to form a government in G-B". He appealed to the independent winners to not trade their victory to a government "that is to end in January".

"Do not become a minister for two to three months," he said, calling on the independents to "protect the rights of the people of G-B by not being cheated by the federal government".

Responding to questions, the PPP chairman claimed that the PTI was promising every independent the chief minister's post.

On Covid-19 and the government's ban on political rallies in light of the resurgence in cases, Bilawal said that the Sindh government was the first to announce measures to deal with the Covid-19 outbreak, and it was the prime minister who made them controversial.

"We have to send Imran Khan packing because he has failed on every front, be it Kashmir or Covid-19. The PTI government does not have the capacity to deal with these issues," he maintained.

Bilawal said that the opposition will make use of the Pakistan Democratic Movement's (PDM) - 11-party opposition alliance - stage to tell the whole of Pakistan about the federal government's 'rigging' in G-B polls - the alliance is to hold its fourth public gathering in Peshawar on November 22.

"We will tell the people that the slogan of 'stolen elections unacceptable' is getting momentum in G-B," he added.

The opposition party leader referred to the PDM's programme, saying the public gatherings will take the form of a long march that will culminate in resignations from the parliament. "We will do everything necessary to send Imran Khan Khan home," he stated.

Did non one tell not to "break wind" with his mouth?