PlayStation 5 which retails for $500 or $400 without a disk-drive, was sold out on major retailing sites in Japan 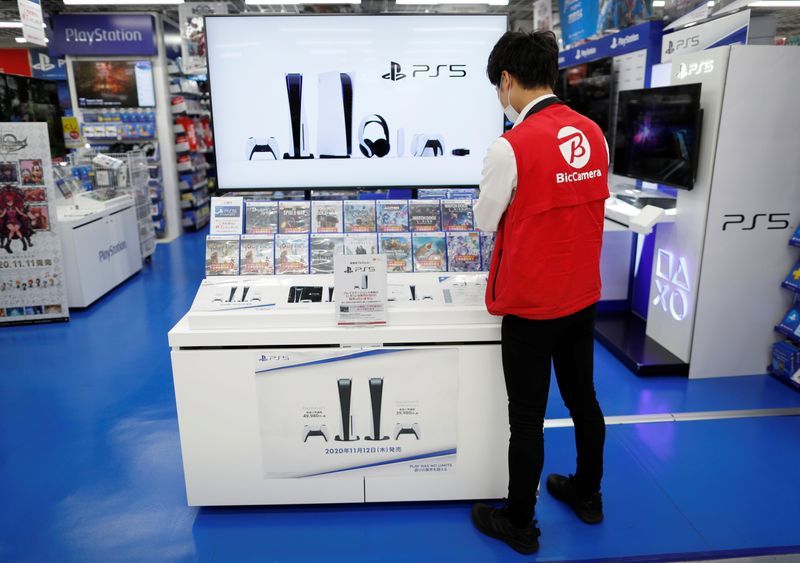 An employee of the consumer electronics retailer chain Bic Camera works at the promotion display for the Sony PlayStation 5 game console and its gaming softwares in Tokyo, Japan, November 10, 2020. PHOTO: REUTERS
TOKYO:

Sony Corp’s PlayStation 5 (PS5) console launched in core markets on Thursday to intense interest online, but with first day real-world sales limited to pre-order pick-ups due to the Covid-19 pandemic that has driven a boom in gaming demand.

Sony has made launch sales online only to maintain social distancing, calling for consumers to “be safe, stay home, and place your order online”.

The next-generation console, which retails for $500 or $400 without a disk-drive, was sold out on major retailing sites in Japan with some conducting lotteries to distribute limited stock.

On Japan’s top flea market platform from Mercari Inc, consoles were selling for more than $900.

Pent-up demand for the PS5, which offers cutting-edge graphics, faster load times, and a new controller with immersive feedback, has been exacerbated by the pandemic, which has seen consumers flock to gaming but has strained supply chains.

Analysts see shortages of consoles from Sony and rival Microsoft Corp, which launched Xbox devices on Tuesday, extending into 2021.