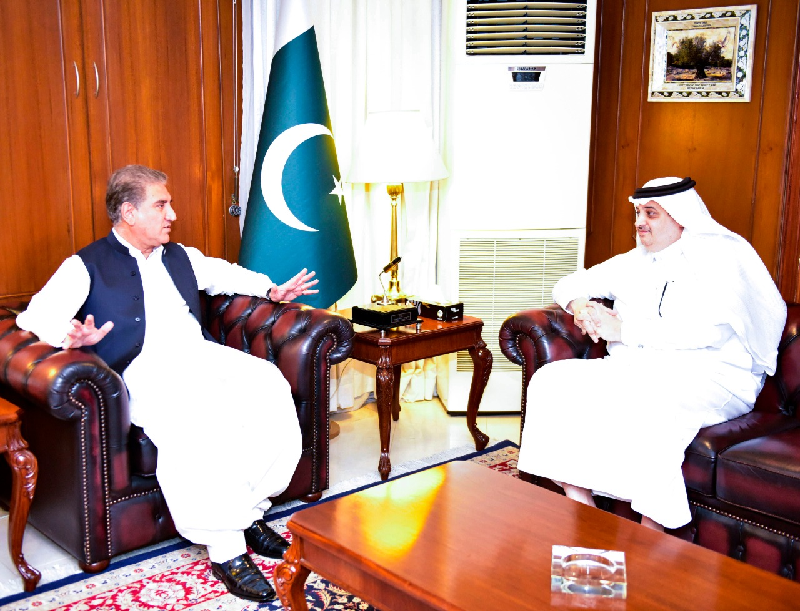 During the meeting, matters of mutual interest and ways to further enhance the bilateral ties were discussed. PHOTO: EXPRESS
ISLAMABAD:

He said this while meeting Saudi Ambassador Nawaf bin Saeed Al-Malki, who called on him in Islamabad on Monday, according to a Foreign Office statement.

During the meeting, matters of mutual interest and ways to further enhance the bilateral ties were discussed.

Qureshi said both the countries enjoy deep and historic relations, adding that the sanctity of the holy sites in Saudi Arabia is part of every Muslim’s faith.

He also condemned the missile and drone attacks launched by Houthi militia towards the kingdom.

The foreign minister said he was eager to meet Saudi Energy Minister Abdulaziz bin Salman and Faisal bin Farhan Al-Saud during their upcoming visit to Pakistan.

He inquired after the health of Saudi King Salman bin Abdulaziz, who in July underwent a successful operation to remove his gallbladder.

Qureshi said a large number of Pakistanis have been living in Saudi Arabia and playing their due role in the progress and development of the country.

Pakistan expected the Saudi government to provide jobs to the laid off Pakistani workers following improvement in Covid-19 situation, he added.

The meeting comes amid Pakistan attempts to mend relationships with its long-time ally which soared in recent times.

Last week, Qureshi had said that Pakistan’s relations with Saudi Arabia were as strong as ever, rubbishing talks of the latter demanding debt payment as speculation.

Saudi and Pakistan's relations haven't changed, he stressed, adding that the premier has made clear Islamabad's position on Palestine, in accordance with the Quaid's vision.

Saudi and Pakistan typically share strong ties, and in 2018 Saudi Arabia loaned $3 billion to Pakistan as well as oil credit worth $3.2 billion to assist with the balance of payments crisis.

However, Riyadh is irked by criticism from Pakistan that Saudi Arabia has been lukewarm on the Kashmir’s territorial dispute, two senior military officials told Reuters, prompting General Bajwa's fence-building visit.

Earlier this month, Pakistan returned $1 billion of the $3 billion debt owed to Saudia Arabia to avoid default on international debt obligations after the kingdom decided to reduce its financial support, according to highly placed sources.