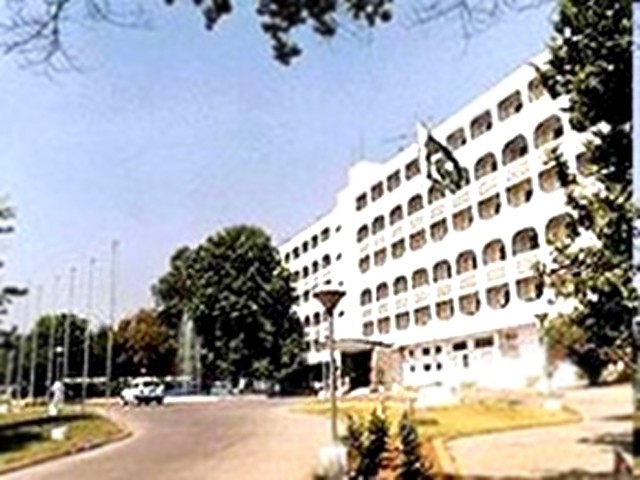 Pakistan on Sunday strongly rejected the "unwarranted and irresponsible" comments made by the Indian Ministry of External Affairs (MEA) spokesperson on the Joint Press Release of the Second Round of China-Pakistan Foreign Ministers’ Strategic Dialogue.

The MEA’s contentions about Indian Illegally Occupied Jammu and Kashmir (IIOJK) being the so-called “integral and inalienable part” of India and an “internal affair” are a laughable fiction, totally contrary to historical and legal facts and in violation of the relevant United Nations Security Council (UNSC) Resolutions, said a statement issued by the Foreign Office in Islamabad.

The official readout said India’s self-serving claims regarding Jammu and Kashmir, including the parts which are under illegal Indian occupation, have no basis whatsoever.

It also categorically rejected India’s malicious propaganda against the China-Pakistan Economic Corridor (CPEC), which is another manifestation of desperate Indian attempts to mislead the world community.

"India has no locus standi on the issue – historical, legal or moral. The regurgitation of false claims by India can neither change facts nor divert attention from India’s state-terrorism in the IIOJK and its egregious violations of human rights of the Kashmiri people," the Foreign Office said.

Rather than resorting to false and misleading assertions, India should faithfully implement its international obligations, it stressed.

"India must immediately vacate its illegal and forcible occupation of IIOJK and let the Kashmiris exercise their inalienable right to self-determination through a free and impartial plebiscite under the auspices of the United Nations as enshrined in the relevant UNSC Resolutions," it further said.

In a joint statement issued by Pakistan and China after the visit of Foreign Minister Shah Mahmood Qureshi, Beijing had called for the resolution of Kashmir dispute in line with relevant UN resolutions and other agreements.

It also urged parties not to take any unilateral steps that may further complicate the longstanding dispute.

Indian External Affairs Ministry reacted to the joint statement by claiming that Kashmir is its internal issue, a claim strongly rebutted by Pakistan.

In the joint statement, Pakistan and China reiterated that the enduring China-Pakistan All-weather Strategic Cooperative Partnership is beneficial to international and regional peace and stability, and serves the mutual security and development interests of both the countries as well as of international community and regional countries.

Both the sides were committed to firmly implementing the consensus reached between the two leaders, enhancing mutual strategic trust, strengthening all-round cooperation, maintaining momentum of high-level exchanges, further advancing construction of the BRI, promoting bilateral relationship to a higher level, and delivering greater benefits to both countries and the two peoples.

They expressed satisfaction over cooperation on regional and international issues at multilateral fora such as the UN, Shanghai Cooperation Organisation and Asean Regional Forum, and agreed to deepen coordination and cooperation to safeguard mutual interests and uphold principles of fairness and justice.

Both the sides reaffirmed their commitment to the purposes and principles of the UN Charter, and support for multilateralism, free trade and win-win cooperation, and opposition to unilateralism, protectionism and coercive practices.