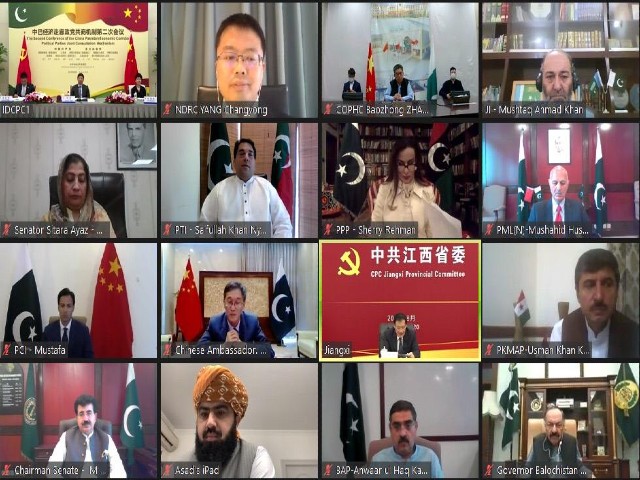 Political parties representing both the government and the opposition, have agreed to “preserve, protect and promote” the China-Pakistan Economic Corridor (CPEC) above party lines, stressing that the mega project was a “game changer and a guarantor of a better tomorrow for the country.

Representatives from 9 political parties participated on Thursday in the second conference of the CPEC Political Parties Joint Consultation Mechanism (JCM) organised by the International Department of the Communist Party of China (IDCPC), in collaboration with the Pakistan-China Institute.

The theme of the virtual conference was ‘Working Together to Promote Economic Development and Improve People’s Lives Through High-Quality CPEC Cooperation’. It was co-chaired by Senate Chairman Sadiq Sanjrani and China’s IDCPC Minister Song Tao.

The 3-hour long conference, which was addressed by politicians from the two countries as well as experts on various issues, unanimously adopted a joint statement, criticising the “slander” against CPEC and vowed to maintain “strategic communication” and build consensus among the political parties.

At the outset, a message from President Arif Alvi was read out. Alvi reaffirmed Pakistan’s strong support to “One China Policy” and opposed foreign intervention in internal affairs of China with regard to Hong Kong and Taiwan. He thanked China for supporting Pakistan on the Kashmir issue.

In his keynote speech, Song Tao thanked President Alvi for sending the congratulatory letter. He noted that party-to-party cooperation between China and Pakistan was increasing and CPEC entered into a new era.

Sanjrani, in his Keynote address, credited China for promoting regional connectivity with its landmark BRI and extended Pakistan’s support to President Xi Jinping’s vision of “shared prosperity” and “win-win” cooperation of which CPEC is the practical manifestation.

Sanjrani affirmed that the Senate of Pakistan would play a greater role in developing consensus among different parties and delivering the political support for more cooperation between the two countries under the CPEC.

Liu Qi, leader of the CPC Jiangxi Provincial Committee, stressed that economic cooperation between Pakistan and China was important in high quality construction of CPEC. he also announced the donation of 500,000 masked and 2,000 protective personal equipment (PPEs) to Pakistani political parties.

Speaking on the occasion, Chinese Ambassador to Pakistan Yao Jing said that China would always stand side by side with Pakistan in all areas of cooperation and both the countries would fight the challenges together.

PTI Chief Organiser Saifullah Khan Nyazee appreciated the exemplary measures taken by China during the fight against pandemic. Balochistan Governor Amanullah Yasinzai said that Balochistan was an important link of CPEC, and Gwadar port would help connect Pakistan with the Central Asian countries.

PML-N Senator Mushahid Hussain Sayed, who is also Chairman of the Senate Committee on Foreign Affairs and the founding Chairman of the PCI, noted that CPEC remained uninterrupted despite the Covid pandemic and was connecting the less-developed parts of Pakistan through the Western route.

PPP Senator Sherry Rehman, who heads the Senate Committee on CPEC, said that CPEC was the poster child of the BRI and the economic stabiliser for Pakistan. She reiterated the PPP’s support to CPEC and PPP is invested in the “Chinese dream”.

Mustafa Hyder Sayed, Executive Director, Pakistan-China Institute called for a ‘Health Silk Road’ in light of the pandemic and criticised double standards on China from the West. Two videos were also played, one regarding the China’s Battle against Covid-19 and other on political consensus between parties in Pakistan and China on CPEC.

The first JCM was held in Beijing in March last year, Now the JCM has emerged as an institutional mechanism between the CPC and the Pakistani political parties for CPEC coordination and communication.