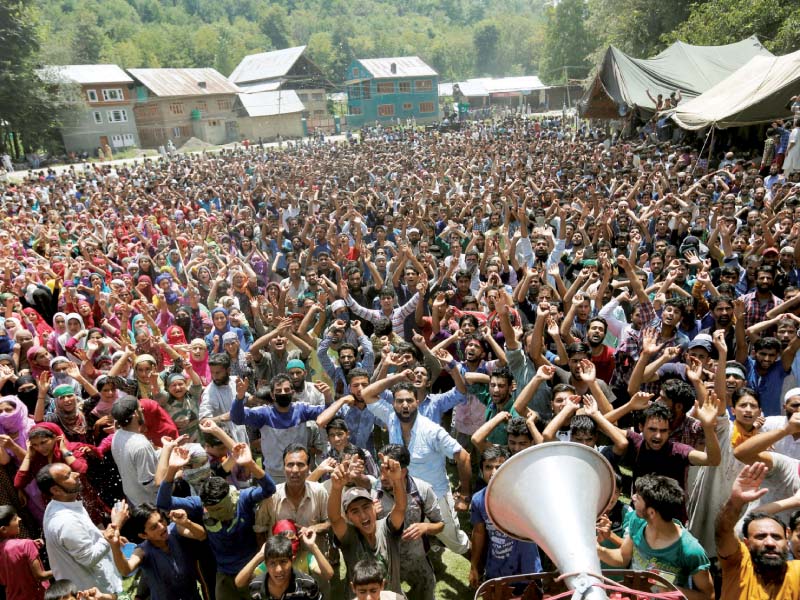 Kashmiri villagers shout slogans during a funeral of civilians, who according to local media were killed during clashes between police and protesters, in Beerwah, north of Srinagar. PHOTO: REUTERS
KARACHI:

. Today marks the first anniversary of India’s illegal annexation of the occupied Kashmir territory. Over the past 12 months, the Bharatiya Janata party, steered by Narendra Modi, has set new records of violations in the Indian Illegally Occupied Jammu and Kashmir (IIOJK).

“We are aware of media reports of torture by security forces in Indian [occupied] Kashmir. Any allegation of torture is deeply concerning, and we urge all countries to guarantee the fundamental rights of their citizens,” said UK Secretary of State for Foreign and Commonwealth Affairs, Dominic Raab.

“It is important that individual rights are fully respected and that there is constructive dialogue with affected communities.” Raab said while responding to a question by Mike Gapes in the British Parliament last year.

According to the United Nations High Commissioner for Refugees (UNHCR), more than 1,250 Kashmiris have been blinded by metal pellets used by Indian security forces from mid 2016 to the end of 2018.

Such atrocities have become a near constant in the Indian Illegally Occupied Jammu and Kashmir. With heavy deployment of security forces and by employing hard handed techniques, the Modi government in New Delhi believes it can suppress the desire for freedom in IIOJK.

Data gather from 2016 shows more than 1,700 Kashmiris were injured by metal pellets used by the Indian occupying force to crush peaceful protests.  The Delhi regime is also intolerant to any form of dissent and has shown no mercy to those who criticise its actions.

Over the past few years, the Hindu nationalist administration of Prime Minister Modi has detained more than 13,000 political leaders, lawyers, activist and even children from the Indian Illegally Occupied Jammu and Kashmir.

Since the annexation of Kashmir last year, India has trampled all basic rights. The illegally occupied territory has been cut off from the world. With limited access to phone lines and even internet, the Modi government has rendered millions of Kashmiri people incommunicado.

In a statement criticising the Indian government’s actions, Amnesty International said: “We share the concerns raised over the dire human rights crisis in Kashmir.”

India continues to receive criticism from all corners, but much of it falls on the deaf ears.  Shortly after the illegal annexation of Kashmir, the Modi government decided to control Kashmir’s communication lines.

“Nearly 8 million people in Kashmir have been living through a communication shut down since August 5. The world needs to know what’s happening. Take action and demand that the government let Kashmir speak,” said Amnesty international, a London based rights organisation. “The Indian government needs to put humanity first and let the people of Kashmir speak,” the group said while urging people to sign an online petition.

Kashmir’s communication blackout is not just limited to the phone lines and internet connections, it goes beyond that. The illegally occupied territory has been a no-go area for journalists. Independent media professionals are not allowed to report from the area. In its petition to Indian authorities, Amnesty International also urged unconditional and unconstrained access to news and information from the valley.

According to an article published by the BBC, Journalists in Indian-administered Kashmir have expressed alarm at reporters being investigated by police under a stringent anti-terrorism law. By April this year, Gowhar Geelani became the third journalist to face such action and the number continues to rise.

Criticising the government, the Editors Guild of India also issued a statement. “We are shock and concerned over the high-handed manner" in which law enforcement agencies have used prevailing laws to deal with journalists in Srinagar.

According to the BBC article, journalists from the valley have been regularly summoned to police stations to explain reports, while others have had charges filed against them, had their mobile phones confiscated and intimidated into revealing sources.

Expressing its disappointment over the killing of a minor in Kashmir in June this year, Amnesty International said: “The unlawful killing of a child shows utter contempt for human life and the fundamental principles of humanity. The authorities must investigate this incident and must bring the perpetrators to justice.”

“Killing of civilians can never be justified under any circumstances and is in violation of Article 3 of the four Geneva Conventions of 1949,” the London-based rights organization said.

The incident triggered global outrage. The UN Secretary General also expressed his concerns about the report. “I remain concerned by child casualties in Jammu and Kashmir and call upon the government to take preventive measures to protect children, including by ending the use of pellets against children. I am concerned by the detention of children, including their arrest during night raids, internment at army camps, torture in detention and detention without charge or due process, and urge the government to immediately end this practice,” said UN Secretary-General António Guterres in a statement.

Other rights organisations have also been vocal and critical of India’s actions. In a statement, the Human Rights Watch said: “The Indian government continues to impose harsh restrictions on Jammu and Kashmir.”

The first six months of 2020 witnessed the continuation of India’s heavy-handed tactics in the illegally occupied territory. The six-monthly review of Human Rights Situation in Indian Administered Jammu And Kashmir paints a grim picture.

“The first six months of 2020 witnessed the continuation of the banning of 4G mobile Internet services, which were banned on August 5 last year. The right to access information continues to be severely restricted in J&K as part of the on-going counter-insurgency measures by the government of India as there were 55 instances of internet blockades recorded from January 1 to June 30 2020,” the document states.

India’s Hindu nationalist government has also received flak for its attempts to modify the demographics of the Indian Illegally Occupied Jammu and Kashmir.  In a recent statement the Organization of Islamic Cooperation cautioned: “We call on India to halt security operations against the people of Jammu and Kashmir immediately, respect basic human rights, refrain from changing the demographic structure of the disputed territory, and settle the conflict under the relevant UNSC’s resolutions.”