The current account deficit - difference between the government’s higher foreign expenditure and lower income - narrowed by a massive 78% to $2.96 billion in the previous fiscal year ended June 30.

The current account deficit shrank to 1.1% of gross domestic product (GDP) in FY20 compared to 4.8% ($13.43 billion) in FY19, the State Bank of Pakistan (SBP) reported on Tuesday. The deficit of $2.96 billion is the lowest in five years. The number improved after the government revised upward the previous month’s (May) current account surplus to $344 million compared to the initially reported $13 million.

The much-needed improvement in the current account deficit in FY20, however, was initially achieved by compromising economic growth. Later, the Covid-19 outbreak slowed down the economy further and caused negative growth for the first time in 68 years.

In dollar value, the gross domestic product (GDP) contracted 5.22% to $263.80 billion in FY20 compared to $278.36 billion in FY19, the central bank reported. The value of GDP in terms of dollar, however, does not truly reflect the growth pattern. Pakistan actually measures economic production in rupee terms and converts that into dollar value.

The volatility in the rupee-dollar exchange rate caused a sharp difference between GDP growth in terms of dollar and actual growth in rupee value.

Earlier, the government had provisionally reported an economic contraction of 0.38% for the first time in the past 68 years.

The number, however, was achieved through curtailing imports rather than increasing exports. “This is worrisome that we have not yet improved exports,” he added. 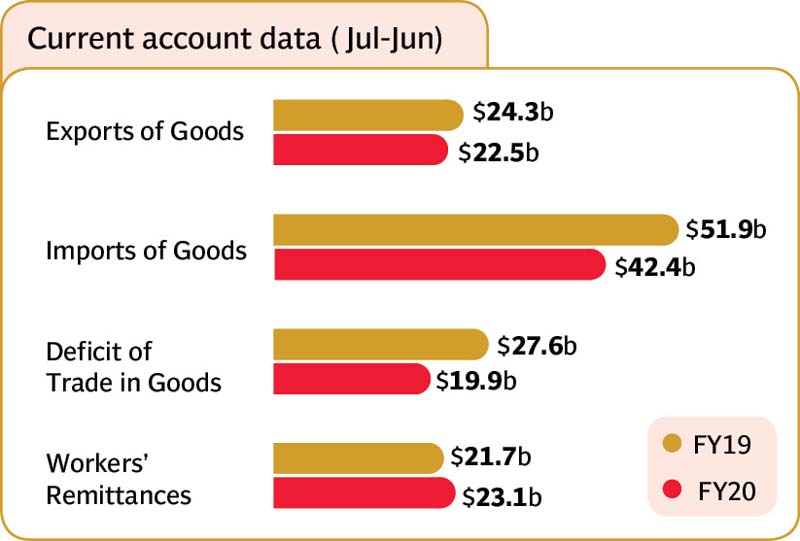 The current account deficit in June stood at $96 million compared with $981 million in the same month of previous year. It was achieved mainly due to a 13% drop in imports and 51% improvement in workers’ remittances. Exports, however, declined 12% in June 2020 compared to June 2019.

He said economic growth would be better in FY21 than the one recorded in FY20. The International Monetary Fund (IMF) has projected Pakistan’s GDP growth at 1% in FY21.

Imports would continue to increase with reopening of the domestic economy from the lockdown. The workers’ remittances are also anticipated to sustain uptrend during the current year, he said.

He, however, said the government should address issues pending release of the third tranche from the IMF of $450 million under its ongoing loan programme of the total of $6 billion. “The resumption of the IMF programme is a must to streamline the economy and improve confidence of other multilateral and bilateral lenders’ confidence in the domestic economy,” he said.

The resumption of IMF programme is also needed to attract both long-term and short-term foreign investment in the domestic economy. “I am confident the government would address the pending issues to get the IMF programme revived,” he said.

ECP issues notice to PTI over tweaks in party constitution

Pakistan will be ‘without natural gas’ by next year