The curious case of escaping prisoners

The curious case of escaping prisoners 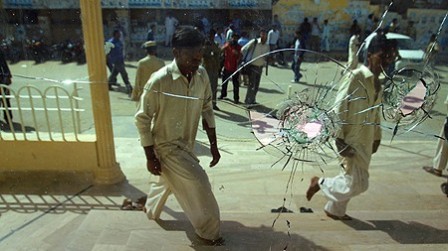 Men walk past the bullet-riddled glass windows of a mosque on premises of the city court. PHOTO: REUTERS

The alleged militants of Jundullah, who escaped from the city courts on Saturday, were facing proceedings in four cases and were suspected of being involved in the bomb blast at an Ashura procession in December last year.

According to the chargesheet filed on February 10, the suspects, Murtaza alias Shakil, Mohammad Shakaib Farooqi, Wazir Mohammad and Murad Shah were booked in four cases at the Mauripur police station (FIR No 57, 58, 59 and 60 of 2010) under Sections 353, 324 and 34 of the Pakistan Penal Code and Section 13-D of the Pakistan Arms Ordinance 1965.

The police had stated, on the record, that the suspects were arrested on the night of January 23 from Hawke’s Bay Road after an encounter with the Mauripur police.

Illegal weapons were also recovered from their possession.

However, the father of Murtaza, Inayat Ali, had reportedly contradicted the police claim, saying that his son was picked up by the police on January 7 from outside a shop in North Nazimabad and then implicated in several ‘false’ cases.

The judicial magistrate had accepted the charge-sheet against the accused and sent the case to the district and sessions judge (west), where it was undergoing trial.

On Saturday, the four suspects were taken to court for another hearing of the Ashura blast case when ‘militants’ attacked the city courts premises with hand grenades and indiscriminate firing. After killing the police guards, the ‘militants’ helped the suspects escape.

This is not the first time that an under trial prisoner (UTP) has managed to escape from the court premises despite the presence of police escorts.

In at least four other cases this year, the UTPs did not even need armed comrades to free them from police custody – they simply managed to run away.

On May 7, Mohammad Safdar alias Raja, a UTP who was brought from the Karachi Central Prison to the judicial complex for the hearing of a case pertaining to his alleged possession of illegal arms, managed to unlock his handcuffs, dodge the police escort and flee.

On April 12, 17-year-old Amanullah escaped from the lockup of the city courts while he was waiting for his turn to be presented before the judge.

Only a couple of days before that, on April 10, another UTP, Asad, who was facing trial in a robbery case had escaped from the city courts premises without facing any resistance from the policemen posted there.

Earlier, on March 1, Arsalan, who was arrested on a charge of possessing an illegal weapon, also fled from the city courts moments after a magistrate had remanded him in judicial custody.

The main reason for the security lapse is that prisoners of all profiles roam freely in the court premises.

Lawyers say that, according to the law, two police constables should accompany three UTPs but this is not followed.

“There are even days when we have to bring around 15,000 UTPs to court, especially after the new judicial policy, and the police do not have the capacity to ensure security for such a large number of criminals,” claimed CCPO Karachi Waseem Ahmed.

According to analysts, the police should have an elaborate plan before bringing any high-profile criminals to the court.